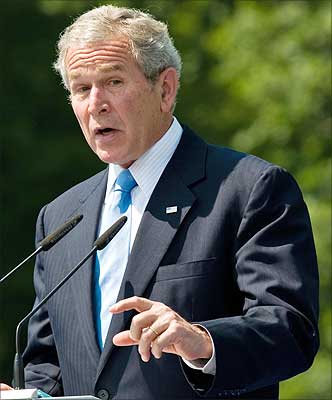 In the autumn of his presidential tenure, George W Bush [Images], it seems, is in an introspective mood.

Looking back at an eventful -- if not controversial -- rule, the United States president said he had been misunderstood as a man who wanted to wage war against the world.

In an interview to The Times, London [Images], the 'most powerful man' in the world interestingly blamed his 'gun-slinging rhetoric' for the misapprehension.

Had he used a different tone and rhetoric, he said, the world would have seen him through a different angle.

'Phrases such as "bring them on" or "dead or alive" indicated that I was not a man of peace. I found it very painful to put youngsters in harm's way. I try to meet with as many of the families as I can. And I have an obligation to comfort and console as best as I possibly can. I also have an obligation to make sure that those lives were not lost in vain,' an emotional Bush said, referring to the Iraq war.

The interview was not about the years went by; it dwelt on his possible successors as well.

On Barack Obama's historic Democratic nomination, Bush said, 'I think the fact that the Democratic Party nominated Obama is a statement about how far America has come.'

But he was quick to add, 'Having that all that, it's going to be important for the American people to figure out who can handle the task of the 21st century. It's a challenging job.'

But he cautioned Obama saying that his promises to renegotiate or block international trade deals had already been already causing alarm in Europe and beyond.

The US president said his aim now was to leave his successor a legacy of international diplomacy for tackling Iran.

Asked if Republican nominee-in-waiting John McCain [Images] would have to distance himself from the current administration and its policies, Bush cleverly said, 'He's an independent person who will make his decisions on what he thinks is best.'

Stressing that his aim was to leave his successor a legacy of international diplomacy for tackling Iran, he said his focus for his final six months in office was to secure agreement on issues such as establishing a Palestinian state and to 'leave behind a series of structures that makes it easier for the next president.'

Admitting that his refusal to ratify the Kyoto Protocol created consternation in Europe, he said that it had been recognized now that richer countries needed to transfer out of the hydrocarbon economy. He insisted, however, that any binding emission targets would have to include China and India, if it had to be workable.