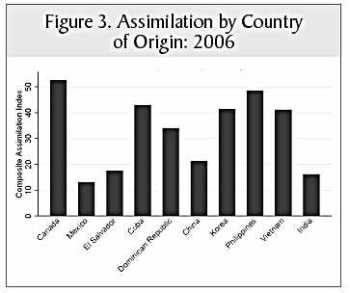 Immigrants from India and China are quick to assimilate into the economic fabric of the United States, but are not as quick when it comes to assimilating culturally and in civic matters, a study by Jacob Vigdor, associate professor of public policy studies and economics at Duke University, has found.

Billed as the first annual Index of Immigrant Assimilation, the study measured three types of assimilation: economic (employment, education, homeownership); cultural (intermarriage, English proficiency, family size); and civic (citizenship rates, military service, voting). It then compared the assimilation rates of recent immigrants by country of origin, and found that immigrants from Vietnam, Cuba and the Philippines have the high ratings across the board.

The overall assimilation index for all countries averages out to 28 on a scale of 100, but the index for India is under 20, and China only barely tops the 20 mark. Mexico rates 13 points, while Canada [Images] scores a high 53. "In terms of overall assimilation, immigrants from Mexico and Central America have index values below those of Indians; the index value for India is below that of China," Bridget Sweeny of the Manhattan Institute, a liberal think tank, said.

Immigrants born in Canada, Cuba, the Dominican Republic, Korea, the Philippines, and Vietnam have assimilation-index values higher than the national average of 28. 'This report introduces a quantitative index that measures the degree of similarity between native and foreign-born adults. It is the ability to distinguish the latter group from the former that we mean when we use the term assimilation,' the report said.

In terms of economic assimilation, immigrants from Canada, Cuba, the Philippines and Korea are indistinguishable from mainstream Americans; these four countries are followed by Vietnam and India. Immigrants from Mexico are the least economically assimilated of any group, with those from El Salvador a close second. Individuals born in the Dominican Republic and China also display economic assimilation levels at or below the national average.

When it comes to culture, Canadians are almost indistinguishable from native-born Americans. "Immigrants born in the Philippines and the Dominican Republic also show relatively high levels of cultural assimilation. At the other end of the spectrum, immigrants born in China and India show the greatest degree of cultural distinction from the native-born," the report said.

Cultural assimilation was measured on a range of matrices that include the ability to speak English; intermarriage (whether an individual's spouse is native-born); number of children and marital status.

"In terms of cultural assimilation, India's index value of 39 is the lowest among major origin countries for immigrants in the United States. When considering a wider array of origin countries, immigrants from Bangladesh have a slightly lower score, 38," Bridget noted.

On the question of why immigrants from some nations show faster assimilation than others, Bridget pointed out that "Cultural factors, including language and intermarriage, are the most important governing factors.  Immigrants from both India and China are well integrated into the American economy, and have civic assimilation scores at or above the overall average. Cultural assimilation for both groups is below the average for all immigrants," she said.

She said religion was not included directly in the study. "Indirectly, though, pressure to marry within one's own religious group, coupled with the fact that Hindus form a small share of the native-born population, could explain the low intermarriage rates, that lead to the low cultural assimilation index value.

"In general, cultural assimilation takes longer than either civic or economic assimilation. Those who immigrate as adults may have the greatest difficulty in learning a new language, and may already be married when they arrive in the United States. The children of these immigrants, however, will likely bear a much stronger resemblance to the native-born. Throughout the twentieth century, the children of immigrants to the US have been very difficult to distinguish from the native-born," she said.

"This report neither proposes nor endorses any policy responses. Its sole purpose is to present information in a manner useful to concerned citizens and policymakers who hope to make informed decisions," Professor Vigdor said.