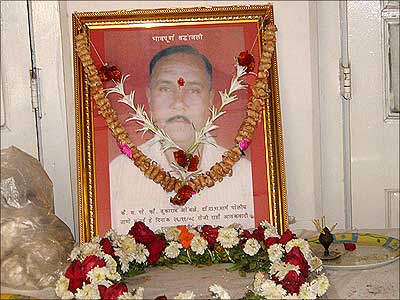 Outside building number 7 at the Worli Police Camp in central Mumbai is a floral tribute to Assistant Sub-Inspector Tukaram Gopal Omble. Shraddhanjali written with marigold petals on the patch of foreground surrounded by yellow buildings that is home to some of Mumbai's police personnel.

It was here Omble had lived with his family, two college-going daughters and his wife, after the two older daughters were married and had moved elsewhere in the city. Today, a garland hangs over his framed photograph and incense sticks burn gently as a steady count of people come to mourn his death.

On the night evil cowards attacked Mumbai, Omble, 48, was on the night beat. At 12.30 am on November 27, a couple of hours after the murderous mayhem in Mumbai had begun, he had called his family and spoken to them.

An hour later he was dead, felled by a flurry of bullets in his stomach from Ajmal Amir Kasab's [Images] AK-47 rifle. Armed with only a lathi (baton), Omble had pounced on Kasab and did not let him escape at the police barricade at Girgaon Chowpatty. The brave policeman tried to disarm the thug by grabbing his gun. Kasab fired, but Omble did not let go enabling other policemen to overpower the killer.

If it was not for Omble's courage, the Mumbai police could not have captured the sole terrorist alive, the only source of first-hand information about the evil perpetrators behind the heinous crimes.

"It is because of his bravery that at least one terrorist was captured alive who is so vital to the investigation," says his cousin Eknath Omble, "Our loss cannot be compensated or replaced, we can only draw strength from Dada's valour which has brought great pride not only to our family but the country."

Another relative, Namda Omble, who works as a bus driver for the city's BEST and claimed Omble's body at the hospital, says he cannot forget the night of November 26. "I called him, but his phone was answered by another policeman. He told me to call back after an hour. I knew then that something was amiss."

His wife and daughters were informed the next morning because no one could muster the courage to give them the sad news in the night. Since then the family has grieved together.

Tarabai, Tukaram Omble's wife sits on the floor, surrounded by her married daughters and women from the neighbourhood. The younger girls sit on a bed staring at open text books in their laps, staring silently at the black letters.

In a showcase in the living room, occupying a prominent place, is Tukaram Omble's police badge and his identity card. On the wall hangs a framed citation from a city college lauding his act of courage; a couple bring in fresh flowers to be placed in front of his photograph.

"When we saw that Omble was not letting go of the terrorist's gun, we knew we could not let his sacrifice go in vain. He held on and we completed his unfinished task," his colleague Sanjay Govilkar at the D B Marg police station had told rediff.com earlier.

Friends from the police force and wellwishers have come in to show support to the family in their time of grief. Someone called from America to express his grief. A lady arrived from Pune with two young sons, carrying a newspaper clipping on Tukaram Omble.

Her children and she had wanted to come and see the family after reading about his valour. "If we can be of any help to you, please don't hesitate to call," she says with tears in her eyes as she handed a business card.

Visitors keep coming into the tiny room, folding their hands in front of his picture and talk about Tukaram Omble's courage on 26/11. "What he did was an act of exemplary courage and service to the nation," says a relative. "He truly deserves the highest honour for bravery. He deserves the Ashok Chakra (the nation's highest bravery award in peacetime)."