Mumbai Joint Commissioner of Police Rakesh Maria [Images], the lead investigator in the attacks case, in his first interview on the acts of terror. Exclusive to rediff.com's Sheela Bhatt!

Part I: 'Our operation was not about 10 terrorists, it was about saving lives'

As we know, in any crime of any nature the most important aspect is the investigator's ability to reconstruct all the phases of the event. Have you been able to reconstruct the terror attacks on Mumbai?

Yes, we have been able to reconstruct the entire terror attack. Kasab [Images] has told us how they were given training for more than a year. How they were indoctrinated with the idea of jihad and other things. Their training was elaborate, they were given advance training that only proper soldiers get. He underwent maritime operations training, too. He knows how to avoid sea signals, how to manage outboard boat engines and inflatable dinghies.

What all happened inside the Taj Mahal and Oberoi hotels, we are not blank at all about it. We know what was the scene like. At the Taj Mahal, the Oberoi and at the CST we have footage of CCTV cameras and we have proof of what went on inside. We have been able to retrieve the entire material. Almost all the crucial parts are on film. This footage is helping us in reconstructing the entire event. Reconstruction of the event is no issue at all.

Are you sure there were only 10 terrorists? Why?

There were 10 terrorist in this attack. Why 10? Because, eyewitnesses in the fishermen's village who saw these guys getting out of the dinghies have told us that there were 10 people. We have retrieved the log book of the Kuber which gives the duty assignment of the terrorists. There are names of 10 people who have been assigned specific duties like who is on watch tower duty, who is going to guard the tandel Solanki and so on. We got only 10 names in the log book.

We have gone through the entire CCTV coverage of Taj Mahal, Oberoi and CST, that count gives us the figure of 10. When Kasab was arrested in the morning of November 27 we immediately interrogated him and he told us they were 10 people. This confusion is more or less a creation of the media.

From day one we have been telling the media that we have knowledge of 10 people and now we know for sure there were 10 terrorists. It is not at all true that terrorists had booked a room in Taj Mahal hotel [Images] to store their ammunition.

Did you try to negotiate with these terrorists? 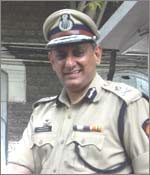 Where was the question of trying when the terrorists in Nariman House killed NSG commando Gajender Singh. He died and two were seriously injured. When people are being killed one after another where is the scope for negotiations? When we were approaching them they were firing and throwing hand grenades. Where is the question of negotiation?

One of them was talking to a television channel too.

How did you read these people's mind when you were watching the live footage that came through the CCTV camera?

They are cold-blooded killers. They sat in a taxi, while one was talking to the taxi driver another was placing a bomb below his seat. In addition, do not forget that these people have opened fire at VT station at women, children and old people. Kasab himself has told us that he fired at some persons, they were bleeding and writhing in pain due to injuries, so he shot them again to make sure they were all dead.

These guys are killers who came from Pakistan via sea with the intention of creating chaos, mayhem and letting loose a reign of fear and terror in the city.

We have read the confession of Kasab...

That is not a confession. There is no confession. The Crime Branch does not record statements in English, ever. We record it in Marathi, only. Don't ask me on the basis of anything that is reported in the press. We are not responsible for that. We are going by the rule book.

What kind of men were these 10 terrorists?

All 10 were between the ages of 20 and 28. Kasab is 21 years old, he failed in the fourth standard in his village in Pakistan. The leader of the group, Ismail Khan, was 28 years old who had passed the 12th standard. Uneducated youths were trained to be terrorists. All of them were unemployed. Indoctrination and brainwashing were done to make them fit to send them on a mission like this.

Pakistani journalists who know the Taliban [Images], Al Qaeda [Images] terrorists and local militants quite well say -- how come Kasab is singing so easily and revealing so much so soon?

What do you mean by "singing" so much? He is telling us what he has actually done. Do you mean to say if he says the same thing after a year you may believe it? If he is trained in not telling his captors the truth, so what? We are trained in interrogation.

If he was trained for one-and-a-half years in terrorism, we have undergone training for three years and 27 years of service. Kasab (his interrogation) is not a challenge. For us he is not a tough nut to crack. They are indoctrinating them into coming and doing such an operation. But the moment they are caught the terrorists realise that all what their mastermind said was not right.

This fellow's (Kasab) story is that he was told that even if you die during jihad your face will glow after your death. He was shown photographs of his dead associates. Then Kasab told us he was not told anything like this could also happen.

Part III: 'The Pakistan connection is beyond doubt'