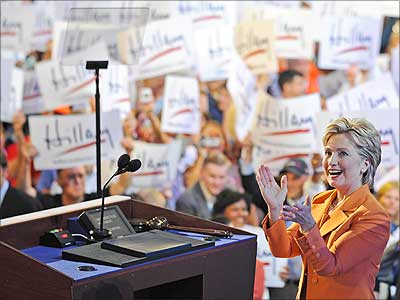 Asking millions of her supporters to back one-time rival Barack Obama [Images] in the race for the White House, Hillary Clinton [Images] sought to present a unified Democratic front at the National Convention in Denver, saying the party's Presidential nominee "is my candidate and he must be our President".

In an unambiguous endorsement for Obama, the New York senator stressed that Democrats do not have "a moment to lose or a vote to spare" and the fight for the Presidential post has to be "won together".

At a time when questions were still being posed on the kind of backing the Clintons were bringing to the campaign and with Republicans playing on the "differences" in the Democratic camp, Clinton tried to address apprehensions that a sizeable number of her supporters were not backing Obama.

"No way, no how, no McCain. Barack Obama is my candidate, and he must be our president," Clinton said to a rousing ovation from the delegates.

Calling herself a "proud mother, a proud Democrat, a proud American and a proud supporter of Barack Obama," Hillary warmed up to the cheering crowd at Denver on the second night of the convention, maintaining the need for unity following a bitter primary battle between Obama and herself.

"My friends, it is time to take back the country we love. And whether you voted for me or you voted for Barack, the time is now to unite as a single party with a single purpose. We are on the same team. This is a fight for the future, and it's a fight we must win together," Clinton said.

The former first lady went on to slam the last years of George W Bush's [Images] Presidential term in the realm of domestic and foreign policies, pledging that the new President will reverse the policy flaws of the last eight years.

She said Democrats wanted to restore 's standing in the world, to end the war in , bring the troops home with honour, care for veterans, and give them the services they have earned.

The New York Democrat kept up with the rhetoric of outsourcing that has been a staple of Democratic campaigning, arguing that the country needed a President like Senator Obama "who understands that America can't compete in the global economy by padding the pockets of energy speculators while ignoring the workers whose jobs have been shipped overseas".

"And when Obama is in the White House, he'll revitalise our economy, defend the working people of , and meet the global challenges of our times. Democrats know how to do this. As I recall, we did it before with President Clinton and the Democrats," the New York Democrat maintained.

Also seeking to allay the speculation that she was miffed at not being seriously considered for the Number Two slot on the Democratic ticket, the 47-year old Clinton was effusive in her praise for Joseph Biden, who has bagged the Vice Presidential ticket.

And Americans are fortunate that Joe Biden will be at Barack Obama's side -- a strong leader, a good man who understands both the economic stresses here at home and the strategic challenges abroad.

Terming the Republican Presidential candidate John McCain [Images] a "friend", Clinton said the country could not afford another four years of the regime, which brought economic stagnation.

"John McCain is my colleague and my friend. He has served our country with honour and courage. But we don't need four more years of the last eight years -- more economic stagnation and less affordable health care, more high gas prices and less alternative energy, more jobs getting shipped overseas and fewer jobs created here at home," she said. "...and you haven't worked so hard over the last 18 months or endured the last eight years to suffer through more failed leadership," she said.