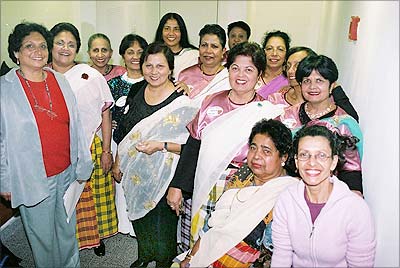 For centuries, Jewish women along the Malabar Coast filled notebooks with Jewish-themed songs in Malayalam and Hebrew. Recently, a series of programs, including scholarly discussions, music and dance and a book exhibition in Washington, DC, attempted to revive that musical heritage.

The highlight was a performance by Nirit Singers from Israel - a group created by the Kerala [Images]-born Galia Hacco, who migrated to Israel as a teenager in the 1950s. Hacco, who leads an oral history project in Israel focused on the lives of Cochin women, and Venus Lane, also born in Kerala, were the two members of Nirit Singers who performed at the program, titled 'The Women Who Kept the Songs from India to Israel: The Musical Heritage of Cochin', at the Library of Congress April 7. The same evening, they performed at an event hosted by the Washington, DC Jewish Community Center.

Kochi was a significant port city where the Jews fleeing Roman persecution settled. Another group, known as the Bene Israel, made Maharashtra their home.

Anthropologists Barbara C Johnson, who has aided the Nirit Singers with her research and field work on the Kerala Jews, and Smita Jassal, who teaches gender and development at Columbia University, and linguist Scaria Zacharia complemented the program, discussing efforts to preserve the music.

"About 30 to 40 such notebooks of songs are in existence," said Smita Jassal, the wife of Ambassador Raminder Singh Jassal, deputy chief of mission at the Indian embassy in Washington. She lived in Israel between 2001 and 2004 when her husband served as India's ambassador to Israel. 'The Women Who Kept the Songs from India to Israel' was a partnership between the embassies of India and Israel, the Library of Congress's Asian Division and the Hebrew Language Table.

The women's songs fall in three groups, said Scaria Zacharia, who has done extensive research in the field. The first group has songs about the origin of the Jewish community in Kerala, construction of the synagogues, and the arrival of the first Jews. The second comprises wedding songs, and the third, perhaps the largest, has songs retelling stories from the Bible in Malayalam.

It is not common to have songs in regional languages and to have women sing in synagogues, Zacharia said. "These songs are possessed by women; they sing them, sometimes they dance. That is very rare in the Jewish community".

Zacharia edited Karkuzhali-Yefefiah!, a 500-page book published by the Ben Zvi Institute of the Hebrew University of Jerusalem of folk songs in Malayalam, with translations and detailed notes in Hebrew. He created a booklet of English translations with Barbara Johnson to accompany her CD, Oh Lovely Parrot: Jewish Women's Songs From Kerala, created by the Jewish Music Research Center of the Hebrew University of Jerusalem. The German publisher Schwabenverlag published an anthology of German translations of 25 songs that Zacharia helped translate. He retired as a professor and chair of Malayalam language and literature at the Sree Sankaracharya University of Sanskrit in Kalady, Kerala.

The history of the Cochin Jews is said to go back to the first century, after the destruction of the second temple of Jerusalem. They are believed to have come to Kodungallur, where Christians believe St Thomas, the apostle of Jesus, arrived, and Muslims believe the first mosque was established. Zacharia says it could be possible since the town is close to Vanchi, the capital city of the ancient Chera kingdom.

The earliest unquestionable evidence of the presence of Jews comes from AD 825, he says, in a copper plate inscribed in Hebrew, and another engraved in Malayalam awarded to the Jews by the local king, from the Common Era 1000. "The earliest synagogues we have are about 500 years old," he pointed out.

After 1948, when the state of Israel was established, Jews from all parts of the world began returning home. Today, estimates say there are less than 50 Jews in Kerala. Of the six synagogues, only one in Kochi is functional.

Back in Israel, Jassal says, women wear the traditional Kerala sari during festivals and events.

She got interested in the migrant songs soon after her arrival in Tel Aviv, when she was invited to a seminar conducted by the scholar David Schulman at the Hebrew University. Jassal, who is the author of Daughters of the Earth: Women and Land in Uttar Pradesh, was then researching folk songs in her native Uttar Pradesh. Her efforts made the Nirit Singers tour possible.

The main interest of Zacharia, who travelled to Washington, DC from India, is to examine the Kerala Jews in the larger context of India. "The interesting thing is this is the only place in the world where the Jews were never persecuted," he said. It is here that they developed many indigenous features, which are a valuable addition to the rich mosaic of Jewish culture, and also contributed to the local culture in Kerala through entrepreneurship. The rulers of Kerala and the public, in general, were hospitable to them. So why did they leave?