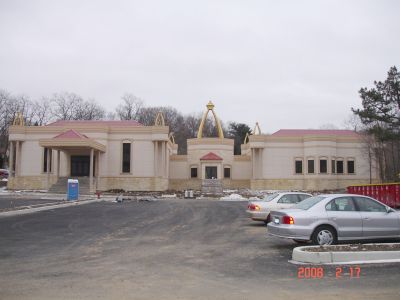 The Hindu Samaj Temple, currently under construction in the foothills of the Ramapo Mountain in Mahwah, New Jersey, will rank among the biggest Indian temples in the United States when opened to the public in August.

Situated on a five acre plot, the temple has four centres: The Temple of Unity, the main temple; the Indian heritage community centre; the museum of Indian journey to the US and the Ganga Sagar meditation and sculpture gardens.

"Work is on in full swing," Dinesh Khosla, one of the trustees, told rediff.com.

"The murtis will arrive later this month from Jaipur."

The main idols are planned to be Durga, Shiva, Rama and Ganesha; idols of Balaji and Sai Baba will also feature prominently among the 22 deities that will be installed in the premises.

Worship at the site began 15 years ago, though the land was acquired only five years ago. Pending consecration of the temple, puja is currently conducted in an old building, which will in time be transformed into the museum.

The temple currently numbers some 700 families as members and, its location on the border of New York and New Jersey, has proved a magnet to people from both states as also Connecticut.

The young generation is particularly enthusiastic about the temple, trustees say; already, 30 to 40 children study the scriptures and Sanskrit; yoga, dance and music classes for all ages are also being conducted.

The proposal to construct a temple at the site met with initial reactions of hostility and resistance; the trustees say all of that is history, and there is now no issue between the temple and the surrounding community, and the general attitude is now welcoming.

Against the backdrop of the recent angst about restrictive visa regulations that impact particularly on the Hindu community, temple trustees say they had no problem bringing over the sculptors and priests required for the project. "If you apply with proper documentation, it is not very difficult to get the visas," Khosla noted.

"Almost fourteen years ago, a small number of families residing in northern New Jersey came up with the idea of building an organization governed by the principle of seva with shraddha (service with devotion), and an organization without any hierarchy. The goal was to build a Hindu Temple of Unity," Priti Bhargava, a leader of the temple, said.

The division of the temple into four integral parts represents the four centres of faith through which the community hopes to achieve the dream of honouring its heritage, celebrating its achievements and fulfilling its duties towards itself and towards future generations, Bhargava said.

The main temple will spread across 9,600 square feet, with a 2,000 square feet balcony area; construction costs are estimated at $1.2 million. It will contain darbars, mandirs and areas for meditation, havan and a prayer hall.

The community centre is about 13,800 square feet, with 2,500 square feet of balcony, and 2,600 square feet of lobby space, being built at an estimated $1.8 million. It will have facilities for weddings and other ceremonies; cultural and family-oriented events; a centre for senior citizens with an array of services; classrooms for language, arts and crafts; facility for yoga, dance and music practice and recitals.

It will also contain a display area for Indian art -- permanent exhibits and works by artists.

The current temple building will be converted into a museum, which will be open to all, especially children of area schools. It will display the recorded history of Indian immigration to the US, and narratives of the immigrant experience and achievements.

The Ganga Sagar meditation and sculpture gardens are centred around a pond on the property that Native Americans believe was formed by a meteorite. The belief is that unique forces of nature mysteriously keep the pond's water level always higher than that of the Ramapo River, which runs across from the property.

The pond will be cleaned in accordance with state laws; water from the Ganges [Images] will be brought over and mingled with the pond waters. A meandering brook is being designed to flow around the 1.2 acres of gentle slopes that surround the pond.

Lush gardens, gazebos and areas for quiet contemplation and meditation will be created around the pond, and provision is being made to host outdoor occasions like concerts and weddings.

Sculptures dedicated to peace, non-violence, and the theme of unity-in-diversity will be placed within the gardens; the estimated cost of the Ganga Sagar part of the project is $650,000.