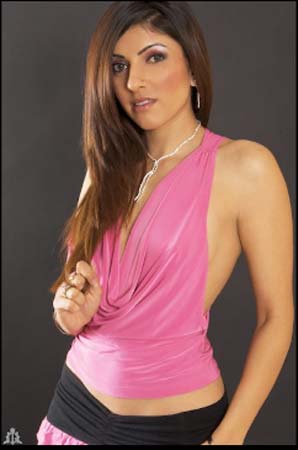 Pakistan President Pervez Musharraf [Images] may be facing the heat from all corners but not from one Pakistani beauty pageants winner who says he is a "hunk".

"A little note to the people of Pakistan. Going to international pageants we have found out how much Musharraf is known to all beautiful young girls, the beauty queens. Some

have replied, 'Oh yes, the general man (sic)'. While others have said 'the man who rules Pakistan'," wrote Sarkari.

"Everything positive... I think personally Musharraf Sahab is very good-looking. Some Pakistani politicians may not agree with these gorgeous women.

"You know like Benazir, all men around the world thought she was a beauty, similarly Musharraf is a hunk. He has enough charisma to have young girls going nuts," goes the beauty queen's post.

Sarkari said she would love to date Musharraf if he asked her out. "Yes, any time... I like him a lot...," she told a news portal.

Sarkari also said she thought "Mrs Musharraf would nod her head in agreement that her husband is an icon no matter what happens".

Sonia Ahmed, founder of the Miss Pakistan World pageant, too is a huge Musharraf fan. On the pageant's website, there are several shots of beauty queens holding up Musharraf's picture, blowing kisses and saying, "We love you Mushy".

"Well, I am a huge fan of President Musharraf and so are my Miss and Mrs Pakistans and I don't know why but we all look up to him as a man who gave freedom to the  entertainment industry and media.

While most contestants taking part in such pageants are non-resident Pakistanis, a few residents are flying out of the country to make a mark at these events.

Sarkari, a Baloch, was raised in Karachi and has been in Toronto for the past six years. She had gone to Canada [Images] to study but stayed on and now runs a spa business there.

When reminded that Musharraf was not exactly popular in her home province of Balochistan, Ahmed said, "I don't care... that's politics."