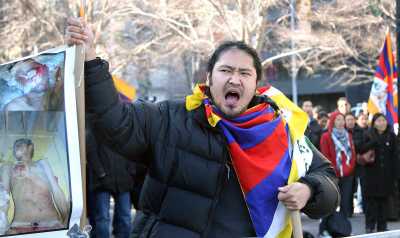 For the second time in less than a week, China has briefed India on the Tibet issue and said New Delhi has assured it that it would not tolerate any political anti-Beijing activities by Tibetans on the Indian territory.

"Mukherjee said the Tibet Autonomous Region is part of China's territory and India will never tolerate any political anti-China activities by Tibetans on the Indian territory," the official Xinhua news agency reported.

In the conversation on Wednesday, Yang also told Mukherjee, "It has been proved and will continue to be proven that any scheme by the Dalai Clique -- supporters of the Tibetan spiritual leader -- to split and break China was doomed to failure."

The conversation comes after China's State Councilor Dai Bingguo's telephonic talk with National Security Adviser M K Naranayan on March 30, when he briefed the latter on the violent crimes in Lhasa and expounded China's concerns over the Tibet issue.

Narayanan was quoted as having told Dai, his counterpart as Special Representative on the boundary talks, that Tibet was part of Chinese territory and India does not allow Tibetans to conduct anti-China political activities in the country.

On Tuesday, Mukherjee had asked the Dalai Lama not to do 'any political activity, any action' that could adversely affect relations between India and China. The minister added that the Dalai Lama was a respected guest and India would continue to offer him all hospitality.

During the telephonic talk with Yang, Mukherjee also said that India fully supported Beijing to host an excellent Olympic Games.

"Olympic Games belong to the people of the whole world and India is proud of the fact that this year's Games is going to be held in Asia," he said.

Image: Tibetans protest against China near the United Nations headquarters in New York on Wednesday