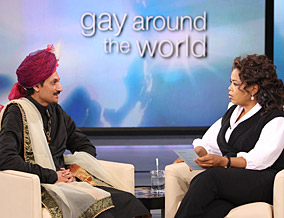 Manvendra Singh Gohil, scion of the Rajpipla royal family from Gujarat, sure has come a long way.

In 1995, he got married with fanfare but it soon ended owing to his homosexuality. Manvendra Singh faced confusion, personal pain and tensions within his family, and even had a nervous breakdown.

On October 24, he was a guest on the Oprah Winfrey Show, talking about his past.

Manvendra's traditional, conservative and feudal background made his personal story interesting and eye-catching. Oprah would have never heard of Manvendra but for his 'royal linage'. Till 2002-03, he was a quite unknown, fearful, and shy but sensitive homosexual trying to do his bit for gays in India, largely to help himself.

Surprisingly, he could not name his sexual urge for almost three decades. Unbelievably, he claims that in Mumbai during the 1980s and early 1990s, where he was a student, he could not find useful information or literature for gays.

He agreed to marry a princess from Jhabua, Madhya Pradesh, because, he claims, "I thought after marriage I will be alright because I never knew and nobody told me that I was gay and [that] this is normal. Homosexuality is not a disease. I tremendously regret for ruining her life. I feel guilty."

He even took up yoga to pacify his agony. In the library, he read about homosexuality in a book under the heading of `sexual deviation.' In the book, it was described as a mental disorder. A few years after the painful divorce, he came across a column by gay activist Ashok Row Kavi. He bought Kavi's magazine for gays Bombay Dost and quickly got in touch with Kavi. Through him and the magazine Manvendra met many likeminded people. He got deeply involved in a social network to help gays in Gujarat.

"In America I have been interviewed five times, including [by] The New York Times, The Washington Post and Los Angeles Times because I am from a former royal family, and Westerners have respect for people like us," Manvendra says. He says ABC made a film on him and his trust Lakshya, which works for HIV/AIDS awareness among the gays of Gujarat.

Rajpipla, where his ancestors were kings, is in the lap of the Saputara range of hills in south Gujarat. To reach the green and beautiful Rajpipla town -- with a population of 75,000 -- one has to cross either the Narmada river or its tributary Karjat. In this tribal district area, Manvendra is known as Yuvraj Shri Manvendra Singhji Raghubir Singhji Sahib. He is into organic farming and selling manure made of earthworms. His father Raghubir Singh's beautiful 35-room pink palace has been converted into a heritage hotel.

"I belong to a very conservative and traditional family," says Manvendra. "It was difficult to be gay in my family. The villagers worship us and we are role models for them. My family didn't allow us to mix with ordinary or low-caste people. Our exposure to the liberal world was minimal. Only when I was hospitalized after my nervous breakdown in 2002 did my doctor inform my parents about my sexuality. All these years I was hiding my sexuality from my parents, family and people. I never liked it and I wanted to face the reality. When I came out in the open and gave an interview to a friendly journalist, my life was transformed. Now, people accept me."

But his mother Rukmini Devi has still not come to terms with her son's sexual preference. Mother and son hardly talk. Father Raghubir Singh has reconciled after seeing his son's work in the field of HIV-AIDS awareness. Lakshya has reached 17,000 gays on Gujarat and won a 2006 UNAIDS award. Manvendra plans an exclusive nursing home for HIV/AIDS patients in Rajpipla.

But, his "people" -- the tribal people and villagers -- want "yuvraj" (prince) to have an inheritor to the "throne of Rajpipla," claims Manvendra. He is thinking of adopting a son. Before granting him a  divorce, his wife told him, `Never do this to any other woman.' He has vowed not to marry again under family or public pressure.