Want to hear the latest joke doing the rounds in Delhi? Here goes. Terrorists aren't just those who brandish weapons. Some drive buses!

But even black humour does not work when a picture of Shalini Dayya, sobbing her heart out after having lost her 8-year-old son to a Blueline bus in February this year, comes to mind. "I lost everything due to the madness of the driver," she said, her eyes welling up. "What is the point in protesting? My son is gone and will never come back."

Since the last few months, the residents of the Indian capital are up in arms against these 'killer' buses, which have mowed down 97 people since the beginning of the year.

The Blueline buses are privately owned and run for the benefit of the general public, mainly within Delhi. A person buys a bus, obtains a permit and hands it over to a contractor who, in turn, pays the owner anything between Rs 3,000 and Rs 4,000 per day.

Officials in the transport department point out that this is where the problem begins. These buses have no fixed route and are on competition mode through the day.

The contractor has a commitment to keep. He has, at any cost, to pay the specified amount to the owner of the bus. He also has to take care of his profit. Hence, the drivers tend to speed up on the roads to save time. 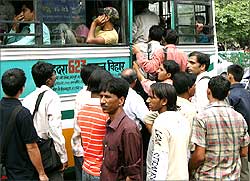 The transport department points out that the owner is unaware of how the bus is being run. If the owner was managing the bus himself, he would probably be more careful.

There are also allegations that most of the Blueline buses belong to 'powerful' people, which is why the transport department is slow in acting against errant bus drivers.

Travelling on one of these buses is like a nightmare. If you are a speed lover, you might enjoy the ride. It is not, however, recommended for the weak-hearted.

At the same time, it is clearly evident that the buses run by the Delhi Transport Corporation lag in terms of speed. There are allegations that the DTC is paid not to keep pace. This way, the contractor running the Blueline bus gets more passengers on every trip while DTC buses run almost close to empty.

Besides, there are only 2,800 DTC buses plying on the roads of New Delhi. Since this was not sufficient to handle public transport requirements, the Blueline bus service was introduced. The transport department feels that at least another 2,000 DTC buses are required if the DTC service is to be adequate

A Blueline bus driver, who did not want to be identified for this article, says he is paid a salary of Rs 6,000. He also gets a shift allowance. He told rediff.com that a Blueline bus driver has no respite from work whatsoever. They face constant pressure to keep up the pace, drive fast and take on as many people as possible in order to make a decent collection at the end of the day. This, he says, turns out to be fatal for pedestrians and other vehicles on the road. "There is a tendency to lose control at such speeds," he says.

The driver also pointed out that there are several cases where drivers of Blueline buses have been caught speeding, but have not been arrested/ fined because the cops have been paid off. Shockingly, at least 2,000 out of the 3,000-odd Blueline buses that ply on the roads do have the mandatory speed governors.

A speed governor basically acts as a speed deterrent -- it controls the power output and the speed of rotation of a synchronous generator, the latter in response to changes in system frequency. The maximum speed at which a vehicle should travel is determined by a speed governor. Buses are supposed to drive at a maximum speed of 40 kilometres within city limits.

The transport department officials say that when the permit is issued, the first thing that is checked is if a speed governor is installed in the bus. However, most contractors later remove the governor, thus giving them the liberty to speed at will. The transport department has now given an assurance that it will make frequent checks and issue a heavy penalty in case they spot any violation.

There are other ways in which things seem to have changed for the better. Ever since the last accident in south Delhi, where a Blueline bus mowed seven people and injured several more on October 7, the police have become more vigilant thanks to immense public pressure. 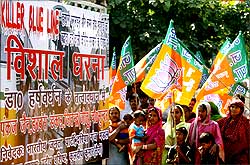 The BJP too seems to have decided it will make best use of this issue and have alleged that several politicians in power are the owners of the Blueline buses. BJP leader Vijay Goel even drove a bus in the city before being arrested. Later, he said, 'I only wanted to show how carelessly these buses were being driven.'

Obviously, the Blueline drivers are not a happy lot. They now allege that the cops are being unnecessarily harsh on them. The drivers even resorted to a snap strike, but withdrew it after a stern warning from Delhi's Chief Minister Sheila Dixit. The drivers have also alleged that, in the past one week, around 500 Blueline buses have been impounded and 100 drivers booked for violation of the Motor Vehicles Act.

Dixit had initially passed the buck to the traffic and police department, saying it was their duty. But Delhi Police Commissioner Y S Dadwal said Blueline buses were not a priority since there were five million other vehicles on the Delhi roads that they needed to monitor.

All this, however, changed after a Delhi High Court directive. The court warned the government and the Blueline operators to be careful. It has also asked the Delhi government to submit a plan to phase out the Blueline buses at the next hearing.

Among the public too, there is a growing demand that the Blueline buses be phased out altogether. The Delhi government has said it will try and do so by November 15. Will this actually happen? Will the buses just slow down? Or will they continue as before?