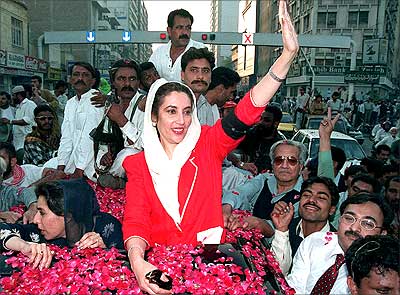 For former Pakistan prime minister Benazir Bhutto [Images], who has landed in Karachi to mass adulation, there must be a strong sense of d�j� vu.

Bhutto's return ends eight years of self-imposed exile; equally notably, it reprises the events of April 10, 1986, when she had ended another self-imposed exile and returned home to a Pakistan headed by then President General Zia ul Haq.

Reports from Pakistan say 20,000 troops have been deployed to provide security in anticipation of the massive crowds that are expected to turn out to greet the former prime minister, and to provide cover in the face of Al Qaeda [Images] threats to assassinate her.

Twenty-one years ago, when she similarly flew into Lahore [Images], it was to a tumultuous welcome, unimpeded by the shadow of suicide bombers.

'The eight-mile drive from the airport to the Minar-i-Pakistan in Iqbal Park usually takes 15 minutes. On the unbelievable day of April 10, 1986, it took us ten hours,' Bhutto recalls in her 1988 memoir Daughter of the East.

'The figure of one million people at the airport grew to two million then three million by the time we reached the Minar-i-Pakistan.'

It was, by her account, an unqualified triumph, reminiscent of the returns to Rome of the Caesars. 'The black, green and red colors of the PPP seemed the only colors in Lahore that day. PPP flags and banners billowed in the dry, hot breeze until they formed an almost continuous canopy. People were wearing red, green and black jackets, dupattas, shalwar khameez, hats. Donkeys and water buffalo had PPP ribbons braided into their manes and tails.'

She felt, she writes in her book, no fear of violence -- not because of the presence of the police and army, but because of the sheltering presence of the crowd itself. 'Though I was totally exposed on the truck,' Bhutto wrote, 'I felt no danger. Only someone who was willing to be torn apart by the crowd could harm me. There was no threat either from the police or the army. Overwhelmed by the crowds, some of our former enemies stayed behind the locked gates of their barracks, while many others came out to join in the celebration.'

In one important respect, though, her return to Pakistan differs from 1986. Then, as now, Pakistan was ruled by a military dictator who had abrogated to himself the powers of president -- but there, the resemblance ends. Here is how she recounts the climax of that April day, when she addressed milling crowds numbering in the millions at Iqbal Park:

'The loudspeaker system wasn't working well and certainly couldn't reach ten times the number of people we had anticipated. But as if by telepathy the people fell quiet with one motion of my hand. 'Here and now, I vow I will make every sacrifice to secure people's rights,' I called out. 'Do you want freedom? Do you want democracy? Do you want revolution?' Yes, the roar came back every time, three million voices shouting as one. 'I have returned because I want to serve the people, not seek revenge,' I told them. 'I put an end to revenge. I don't have any such feelings in my heart. I want to build up Pakistan. But first, I want a referendum from you. Do you want Zia to stay?' No, the sound wave roared. 'Do you want Zia to go?' Yes, the roar mounted. 'Then the decision is Zia jahve!' I called out. 'Zia must go.' 'Jahve! Jhave! Jhave!' millions of voices cried into the darkening sky.'

That is a scene that is unlikely to be repeated later today, when Benazir Bhutto addresses the crowds in Karachi. Then, she returned as the redeemer, the person who would spearhead the movement against the military and in favour of democracy.

Today, she returns on the wings of compromise, having reportedly brokered an agreement with embattled President General Pervez Musharraf [Images], by which the two will share power following the national elections scheduled in January.

On arrival in Karachi, Bhutto is scheduled to take her place at the head of a procession of PPP workers and supporters, that will wind its way, over several hours, to a venue close to the tomb of Mohammad Ali Jinnah, founder of Pakistan, where she will address the people and make her first public pitch for power.

Photograph: AAMIR QURESHI/AFP/Getty Images | Image: Former Pakistan prime minister Benazir Bhutto addressing a rally in Karachi in February 1999. Bhutto returned to Pakistan in 1986, when then as now an army general was in charge of her country. In the elections that followed soon after, she was elected prime minister with a thumping majority. Will history repeat itself?