With the India-United States nuclear deal facing an uncertain future, there has been a spate of analysis on the domestic opposition to the deal from within India. Security hawks and sections of the Bharatiya Janata Party worry that the deal may constrain India's strategic options in the future. And for India's Left the most disturbing implication of the deal is that it will bind India more closely to the US.

Commentators in favour argue that the BJP's opposition to the deal seems more the result of the narcissism of small differences, payback for the Congress's carping when the BJP-led National Democratic Alliance government conducted India's nuclear tests.

In both cases each party achieved what the other had been diligently pursuing when in power, and then found the prize snatched away by its rival at the last minute. Not surprisingly, both incidents have led to acute frustration masquerading as principle! And the Left parties could either be acting as the cat's paw for the Chinese or simply being consistent (or, as some would say, pathological) in their opposition to the US. But where does the Indian public stand? What do Indians think about issues with foreign policy implications -- and in particular about the US?

Cross-national surveys conducted by the Pew Global Attitudes Project and the Chicago Council on Global Affairs clearly show that the Indian people have favourable feelings towards the US. In both surveys on global public opinion, India consistently ranked near the top of the list in its confidence in and support of the United States. This has not always been the case, however.

In 2002, the percentage of the polled Indian population expressing a favourable opinion of the US, at 54 per cent, was in the lower half of the countries polled. In 2005, the percentage shot up to 71 per cent, the highest of any country polled. And in the Pew Global Attitudes Survey conducted earlier in 2007, India ranked 14th among the 47 nations (most of the others above it were African countries), with 59 per cent of the public holding favourable views of the US.

However, the aforementioned cross-national surveys suffer from two problems. First, since their sample frame is mainly urban, they can potentially be seriously biased. Second, the sample sizes are too small (less than three thousand in both cases) to understand variation within India, whether across states or among socio-economic groups. This is important because a political party with a concentrated electoral constituency may take a strong position based on the need to shore up its political base even though this might differ from national public opinion. And if it is part of the ruling coalition, the exigencies of coalition politics may still result in a policy being vetoed.

However, in addition, our survey design allowed us to measure the response of nine (six in urban and three in rural India) specific socio-economic (SEC) groups, defined by education and occupation. Data from the Beijing surveys show that wealthier, better educated, better travelled, younger and better informed residents had more positive feelings towards the US. What does the Indian data tell us?

First, there is a clear relationship between socio-economic status and the ability to respond to questions on foreign policy. The more elite (defined both by education and occupation), the more likely Indians will have an opinion on foreign policy issues. For the large number of rural landless, 69.7 per cent 'don't know' while another 24.3 per cent have 'no response.' At the other extreme -- educated urban professionals -- the figures are 21 and 6 per cent respectively, an almost four-fold difference. High non-response rates among the weaker socio-economic groups indicate that they may be 'efficiently' ignorant, ie, they are not interested in putting in the effort on an issue that has low salience for them.

Second, to the extent that Indians express their opinion about the degree of warmth (or positive feelings) towards a country (the choices were US, Japan [Images], China, Pakistan, Bangladesh and Saudi Arabia) the data is unequivocal: while the US does not rank above the other countries in all categories (figure 1), no matter which way the data is segmented -- by socio-economic group, income, state, gender, age, rural-urban -- Indians have the warmest feelings towards the US followed by Japan, with (expectedly) Pakistan at the other end of the spectrum (figure 2).

[Figure 2: Variance is calculated as the degree to which the US is preferred by a segment, compared to the average warmth for all countries felt by the segment.] 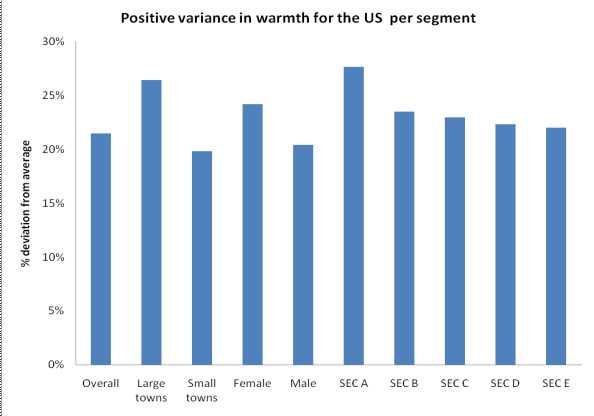 Third, as with the residents of Beijing, respondents in higher socio-economic groups in India also have warmer feelings towards the US (figure 1). This could occur either because the elite are more informed about the US or because they benefit more from a relationship with that country. 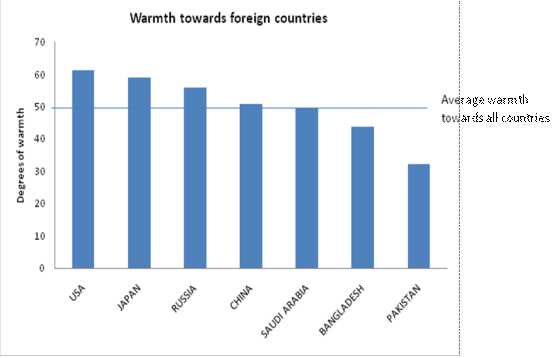 More interestingly, however, the weaker socio-economic groups also unambiguously prefer the US relative to other countries. Thus, while Indian elites may like the US more in absolute terms, weaker segments of society also value a relationship with the US more than that with other countries. 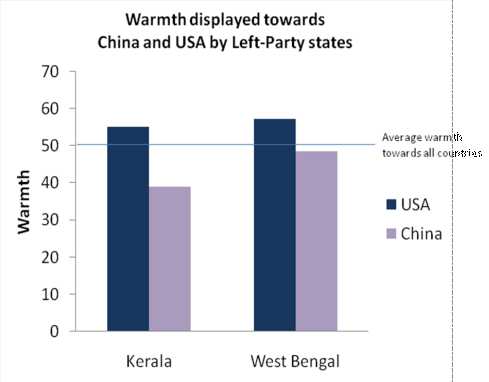 We also examined the view that the need to placate India's Muslims -- an important voting constituency in an increasingly competitive voting environment -- may be playing a role. While we don't have data on the religious beliefs at the individual level, there was no statistical difference in states with higher Muslim population from those with low concentration of Muslims. The widely believed view that Muslims are anti-US does not find support.

Fifth, the evidence from other questions in the survey indicates that the Indian public is not na�ve and indeed demonstrates a streak of hard realism in its judgments about the US. Respondents were asked to rate the governments of countries both in terms of trustworthiness and how aggressive they felt the government to be. In both cases the US ranked lowest and this was perhaps why, in response to another question on India's dealing with foreign governments, the majority of respondents felt that the Indian government should be tougher in its negotiations with United States.

Indeed as events transpired after the survey was conducted, the Indian government did precisely that, and the resulting deal was considerably more favourable than the initial negotiations.

Sixth, to the extent that the elite matter most in shaping foreign policy, two features of the responses of the highest social-economic group, representing the top four percent of the population, are especially noteworthy. One, they hold more intense beliefs than all other socio-economic groups. For instance, they have warmer feelings towards both the US and China but also more cold feelings towards Bangladesh and Pakistan. Second, the variance in views of this group is least compared to all other groups. Thus, with regard to opinions related to foreign policy, Indian elites not only have stronger opinions than other socio-economic groups but also agree with each other to a greater degree than members of other groups.

The survey of foreign policy attitudes of Indians did not explicitly address the nuclear deal with the US and the results do not imply that the public is for a strategic alliance let alone supports specific actions by the US. Rather there is no empirical evidence that Indian public opinion opposes closer ties with the US.

Indians see the US as worthy of emulation but are wary of US power -- sensible people anywhere ought to be bothered by the accumulation of power no matter who has it. But to the extent that opponents of the deal have argued that Indian elite are using it to drive the country closer to the US contrary to the 'people's wishes,' the empirical evidence indicates that not only does the average Indian voter prefer the US to other countries, but also that this holds true for the poor as well as elite voters. At the same time, they are not na�ve about their views of the US government. Thus the vehemence with which the leadership of the communist parties has attacked the nuclear deal has little to with the wishes of 'the people' and in that sense could well be regarded as anti-democratic.

Having pushed so hard for the deal, both within India and in its external negotiations, the Indian government's balking now has several sobering implications. Its isolation in nuclear technologies will continue. Major powers will be much more wary in taking risks in reaching out to India. And India's relations with its US diaspora will suffer -- who will bat for India if the government has so little credibility?

How well a country does in its external relations is somewhat akin to success in a game of cards. It is not just how good or poor a hand one is dealt, but also how well one plays. If India fumbles in how it handles this deal, it will be a refection of just how much India's attempts to become a major power will be hobbled less by its external environment than its domestic constraints, in particular the fragmentation in India's polity.

Devesh Kapur is the Madan Lal Sobti Professor for the Study of Contemporary India and the Director of the Center for the Advanced Study of India at the University of Pennsylvania.