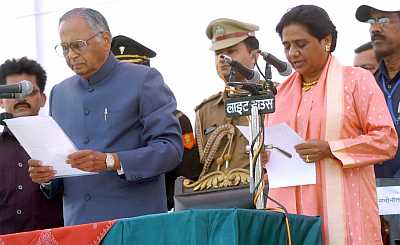 Ushering in single-party rule after 14 years, BSP chief Mayawati assumed reins of power on Sunday in Uttar Pradesh, heading a 50-member jumbo ministry inducting several persons from the upper castes, reflecting the rainbow coalition she stitched to get an absolute majority in the elections.

The 51-year-old leader, who became the chief minister for a fourth time, was administered the oath of office and secrecy by Governor T V Rajeshwar at a simple ceremony at the Raj Bhavan.

After the function, the new chief minister introduced her parents to the Governor.

BSP general secretary Satish Chandra Mishra, who helped Mayawati in roping in Brahmin support for her, was the only political leader sitting on the dias along with her during the ceremony.

Among the ministers, Siddiqui is BSP national secretary and Lalji Verma is state party chief.

Mayawati, who became the first Dalit chief minister in India in 1993, is the 40th chief minister of the largest state of the country and shares the record of becoming the chief minister for four times in the state with Congress leader N D Tiwari.

Mayawati, who is a sitting member of Rajya Sabha, will have to be elected to the state assembly or legislative council within six months from the date of her swearing in.

On Saturday, the Governor invited Mayawati to form the government after BSP legislators elected her as their leader in the 403-member Assembly.

Her party won 206 seats out of 402 constituencies which went to poll in elections, spread over one month.

Image: Mayawati being administered the oath of office and secrecy by Governor T V Rajeshwar