The number of people who were killed in Thursday's early morning Naxalite attack on a police post in Chhattisgarh's Dantewada district would have been much less but for police overconfidence and negligence, a senior intelligence officer in the Chhattisgarh police has said.

"The police were a bit overconfident. This area was under complete Naxal control and our forces had -- over an extended period of time and with great effort -- managed to pry it away from them," the officer, who did not want to be named for this report, said.

The post that was attacked was a temporary post set up to assist the forces that were building a road between Kutru and Farsegad. Inspector General of Police Girdhari Naik said that from the forensic reports, the police has pegged the Naxal casualty at 10 to 12.

"The Naxals took a lot of cots from the villagers, indicating that they have some seriously wounded people also. They had also booby-trapped the place with seven improvised explosive devices. We have managed to diffuse them. Otherwise, the casualties would have been even more," Naik said. 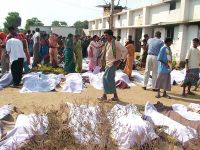 The security forces in Rani Bodli have in recent months been gaining small victories over the Naxalites. "There were incidents where we would take out two or three Naxals in encounters regularly," the officer said.

Rani Bodli is also the region where the Salwa Judum (a tribal militia where locals are armed and trained to hunt down the Naxalites.) started. That also led the police to believe that the Naxalites had conceded this area.

"They never would give up this area. It is a crucial place for them, since it is close to the Andhra and Maharashtra border (click here to see the map). For the past three months, our boys [from the intelligence department] have also been warning the forces in the region that an attack was imminent," the officer said.

The forces in the region never made much of these warnings, and were relaxed and indifferent.

The officer says that even when the attack happened, the police were in a position to interfere and minimise the damage. "The policemen in the camp alerted other posts that they were under attack. This SOS call was taken lightly," he said.

There is a reason for this. The police in the region are so used to sporadic attacks, that they thought this attack will also be a bout of routine exchange of fire. They never realised the true scale of the operation. "If the two police stations -- one is 9 kilometres from the area under attack and the other 12 kilometres -- that were alerted had set off immediately, more lives could have been saved," the officer said.

Naik rubbishes this claim and said that reinforcements reached the attack site in record time. "The parties moved in at record time. They were in the spot in three hours. They repulsed the Naxalites and chased them into the forests. In the morning, there were a couple of encounters, but nothing came of it. The police did not take the road, as they are usually mined. Naik says that in cases where there is no accessible road, the standard international pace is one kilometer per hour.

But what led to the attack? One, the timing. It has come close on the heels of the ninth congress of the Communist Party of India-Maoists. The Naxalites had said that they will step up their guerilla war into a mobile war and guerilla zones into base areas in India. "The attack could be in step with their agenda, though we don't have anything concrete about it now," the intelligence officer said.

More than the body count, the psychological impact the attack will have is far greater.

"They have managed to strike at a place where we had previously seriously crippled them. It is also meant to embarrass the government. The message will reach far and wide. Everyone who enlisted in Salwa Judum and picked arms will think about their decision now. It is a serious issue. If the forces can't take care of themselves, what will the Salwa Judum do? That is the kind of message that will go out," the officer said.

Another worry for the security forces is that the Naxalites have walked away with a load of sophisticated weapons. "We had brought in a lot of modern weapons for counter operations. They have taken a lot of AK-47s, SLRs (self loading rifles) and most important of all, a 2-inch mortar. It is a very modern weapon that is capable of annihilating anything within 100 metres. It has now fallen into their hands," the officer said.