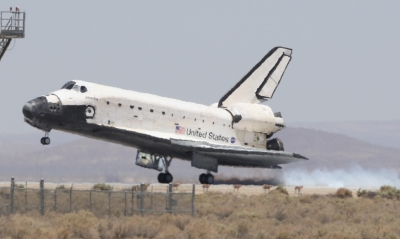 With Commander Rick Sturckow and Pilot Lee Archambault at the controls, Atlantis landed at 3:49 pm EDT.

As Atlantis crossed the Pacific and glided over the runway at Edwards Air Force Base in Califonia, several people recalled the tragic memories of the Columbia disaster of 2003, in which India-born Kalpana Chawla [Images] and six others perished.