June 06, 2007
How will climate change transform India? What should Indians do in our everyday lives to lessen the impact of global warming?

Rediff.com's Nikhil Lakshman asked Dr Rajendra K Pachauri, Chairman, Intergovernmental Panel on Climate Change, what India and Indians need to do to counter the terrors of global warming. The third in a five-part series of interviews:

Part 1 of the Interview: 'Climate change reports have not been diluted'

A lot of young people seem to be absolutely aghast at the consequences of global warming. Would you outline for them the immediate and long-term implications of climate change?

We can separate out very neatly those effects which are caused by nature -- and these could be sunspots, these could be volcanic activity -- and those activities which are human induced. So we can say now on the basis of scientific research and very sophisticated modeling activities exactly what the separation between these two drivers is. I think that's very, very clear.

We now find that there is more than a 90% chance that all the warming that has taken place in recent decades is the result of human action.

We have also made projections for the future, which show, for instance, there will be major precipitation changes. We also know that there will be major temperature increases and the impacts are not going to be uniform. There are some countries that are far more vulnerable than others, some regions where the impacts will be quite severe.

Part 2 of the Interview: Climate Change: 'The science is first rate'

Will the Himalayan glaciers truly melt?

Look at the rate at which the glaciers are melting. There is enough documentary evidence, there's visible evidence. You don't even have to measure anything. You can see it taking place.

Sea-level rise is a reality and you know we need to be concerned about it. We have a large coastline. Agriculture is likely to be affected adversely.

So you know these are issues that are clearly going to have major implications for human activity across the globe and it is important for people, particularly those who are in the younger age group, to worry about some of these issues and start taking both adaptation measures as well as ensure that on a global basis, we can bring about effective mitigation of emissions of these gases. 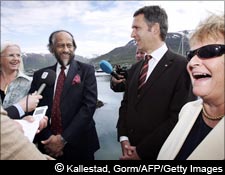 So is this change universal?

Well, a good part of it really is because even if we had stabilised our emissions during the year 2000, climate change would continue for several decades. As a matter of fact, sea level rise, which really has the longest time scale, will continue for centuries. So we have to adapt while we may bring about action to mitigate emissions.

But you think we need to adapt to climate change as well as mitigate its consequences?

Absolutely. You need to do both. One or the other will not work. You need both.

What adaptation can we do in India?

Water management. We need to manage our water resources far more efficiently. Make sure that every drop of water, at least in economic activities, is used effectively.

I mean simple things like the kinds of toilets that we have over here, they are terribly inefficient in the use of water. Everywhere else in the world they have come up with designs that are far more efficient. With urbanisation and the demand for water growing in urban areas, these are things that are going to be critical.

In agriculture, we waste enormous amount of water, in industries we need to recycle water. There is a lot that can be done in the case of agriculture.

We need to come up with very location-specific solutions and how we may be able to counter the impact of climate change. Otherwise, agricultural yields will decline.

What about the energy scenario?

Well, there you really need global responses and global solutions. India is a very small part of the emissions problem. Even though our share is growing, it's still very, very small. I think action has to be taken first by the developed countries and I think that's absolutely critical. It is essential.

The European Union is trying to tackle climate change. The Bush administration, for long averse to taking any action, has finally stirred. What about India?

The government has to take the lead. We have to come up with a game plan, we have to come with a roadmap about what we need to do about climate change and, of course, predominantly it has to be an adaptation-based plan of action.

The number of cars that are on the roads is ridiculous. We have to think of a totally different plan of transport as opposed to what has been followed in the developed countries. It doesn't suit our conditions, locally or globally. So you know these are things that have to be thought through and you know we have to articulate them.

Has the government consulted you on what needs to done? The finance minister mentioned the constitution of an expert committee on climate change in his Budget speech. It has been a couple of months since and there has been no movement.

I haven't heard anything but you know on a regular basis we (The Energy Research Institute of which Dr Pachauri is the director-general) work very closely with the ministry of environment. We provide them regular inputs in the negotiations, in defining their own position as far as climate change is concerned. We have a good relationship in terms of providing advice and analytical inputs to the government.

Part 4 of the Interview: Climate change: 'You will have many more vector-borne diseases'