American colleges and universities are notorious for professors with big reputations who barely have time for their students. But, in the two odd decades that she has taught in America, especially at Massachusetts Institute of Technology, Professor Anita Desai was always known for being accessible.

At the same time, she would be as firm with the students as she is with journalists and fellow writers. You had better not waste her time. And you had better know the books you want to discuss well. In fact, in your own interest, listen to her. Gentle and giving as she is, she will, with quiet authority, tell even the most celebrated person where she stands on an issue.

Imagine then, this gentle and frail woman admonishing Nobel laureate V S Naipaul, telling him not to be so polemical in his writing that he was whipping up Hindu passions against Muslims in India.

Imagine her telling filmmaker Ismail Merchant she was 'shocked' to see his version of her novel, In Custody. It was not that she did not find anything good in the film. But, even though she had known the film was going to be in colour, she felt it looked too glamorous. As she told an interviewer, 'In my imagination, it was all very grey, very dark and dirty, and I just couldn't believe my eyes when I saw it in gorgeous technicolor, and everyone beautifully dressed, looking very handsome.' 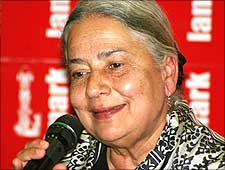 Yet she is a realist. She said she quickly detached herself from the film, which was released in 1993, and accepted the fact that it was Merchant's vision of her book. To be fair to Merchant, she also said, 'There were things though that I did enjoy very much in the film, like the music, and actually hearing the poetry in Urdu.'

When you meet Desai, you get the impression she is a detached person. It takes a few minutes to realise that this acclaimed writer --- who is a Fellow of the Royal Society of Literature in London [Images] and has received the Guardian Award for Children's Fiction for the novel The Village by the Sea (1982), the 1978 National Academy of Letters Award for Fire on the Mountain (1977) and, just last week, was made a Sahitya Akademi Fellow ---  is not only the least egoistical writer you can ever meet, she also has a fine sense of humour and can laugh like a child.

She welcomed me into her simple but elegant home in Cambridge, Massachusetts, over nine years ago, when her daughter Kiran's first novel, Hullabaloo In The Guava Orchard, was being published. Mother and daughter often worked in the same home over the weekends. Kiran would travel about five hours from New York a couple of times a month to be near her mother. But they worked in their individual solitude. They still do, whether it is in Mexico or at Desai's home.

Over the years, I have met Anita Desai several times; she has welcomed me in her Cold Springs, New York home, where she settled down after retiring from MIT. Like in the past, she would offer a delicious, low calorie meal. Every time I meet her, I return admiring her simplicity, her gentle but fierce intellect and her honesty. Not to mention her desire to lead a simple life that embraced literature.

You may spend just an hour with her, but the thoughts that you return home with will stay with you for a long time. You would have also discovered a few writers you had not heard about. And you would certainly want to read them because Desai spoke glowingly about them.

A few years ago, she wrote an intriguing novel, The Zigzag Way. It was not set in India or England [Images] or America, but in Mexico which, after India, has become another home.

While chatting with her about her Mexican sojourns, one discovered again how the Western writers such as D H Lawrence and Graham Greene looked at the country. And how Desai saw the landscape and the people through her Indian eyes. She did not find a bleak or strange country; she did not find an alien culture either. In fact, she found it far more fascinating than America because, she says, in every corner of the country, on every street, in every town, across hundreds of squares and in the churches and ruins, she would find history that was thousands of years old.

Kiran told me not long ago that when her mother left India to teach abroad, first at British colleges and then in America, one of the things that gave her huge satisfaction was the fact that that she did not have to use domestic help.

"I have learned to do things on my own, and I enjoy it," I remember Desai saying. "I have few needs, and taking care of this house is not a big deal at all. I lead a simple life and make sure I have plenty of time to read and re-read the books I love."

I also remember Kiran telling me how much her mother enjoyed clothes that were elegant but not expensive.

Anita Desai was born in Mussoorie, the daughter of D N Mazumdar, a businessman, and Toni Nime, a German he had met during his studies in that country. Though her mother belonged to the Lutheran church, she gave her children no Christian religion. In fact, there was no religion in the Muzumdar home. You will not find pictures or images of gods and goddesses in the Desai home either. Anita Desai is anything but religious; at the same time, the human values she learned in her home in India are very much part of her life and that of her children.

Listening to her will make you want to revisit her books and perhaps see them in another light.

'A lot of people tell me my books are extremely pessimistic, and extremely dark,' she said in an interview. 'I would prefer to think of them as facing the truth, not having illusions. But I do make an attempt also to show the fact that India is full of laughter.'

Thinking of Desai means wanting to read couple of her books again. I think I will again read Clear Light Of Day, which came out over seven years ago.

The book, at once tender, compassionate and life-affirming, deals with a fractured family, the ability to forgive and forget, and to surrender to love. It is one of her most praised works.

'Anita Desai has created an entire little civilisation here from a fistful of memories, from a patchwork of sickroom dreams and childhood games and fairy tales,' wrote the distinguished novelist Anne Tyler, while reviewing it for The New York Times. 'Clear Light Of Day does what only the very best novels can do; it totally submerges us. It also takes us so deeply into another world that we almost fear we won't be able to climb out again.'

I fear that, once I start reading, I may be tempted to revisit all her books.