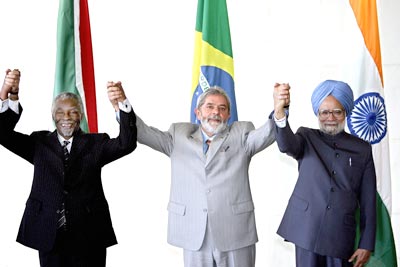 The first-ever summit of the India-Brazil-South Africa Dialogue Forum began on Tuesday in Brazil's [Images] capital Brasilia with leaders of the three countries stressing upon the need to empower millions of people living in Asia, Africa and Latin America.

Addressing delegates, Dr Singh said: "The success of our experiment to pursue development within the framework of an open economy and an open society is vital to the well being and empowerment of millions of people in Asia, Africa and Latin America."

Stressing upon the need to take bold decisions, the prime minister said: "Trade and tourism ties between the three nations have not yet reached its full potential. We have to take a bold decision to make things work."

Don't miss:
Why Dr Singh is in Brazil
Images: Red Carpet for Dr Singh in Brazil
Coverage: PM at the NAM Summit