October 19, 2006
Ayikudy is a village in the Tirunelveli district of Tamil Nadu where S Ramakrishnan (below, left) has lived for 52 years of his life.

In 1975, he met with an accident that made him a quadriplegic (affected with paralysis of both arms and both legs). "The accident occurred during the Indian naval officers selection interview. I was hospitalised at the Air Force Command Hospital, Bangalore and then shifted to the Military Hospital, Khadki, Pune." 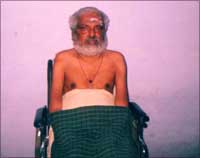 "In Bangalore, I was in traction for three months and totally bedridden. Then they gradually trained me to sit on a bed and wheelchair. I have no sensation below the neck. I need help for bathing, turning over in bed, eating etc."

A world of wheelchairs

After spending a year in hospital, Ramakrishnan returned to his village. A couple of months later, he began to teach.

"It was difficult to spend time those days. I decided to do something meaningful and started Amar Seva Sangam in 1981. The doctor who treated me at the hospital was Air Marshal Amar Singh Chahal. I named this center after him."

Soon after, he was joined by S Sankara Raman, afflicted by muscular dystrophy and a wheelchair user, who left his practice as a chartered accountant in Chennai and joined him. They have worked together since.

Today, around 60 polio-affected children from nearby villages live in the home. They attend classes up to Class VIII within the campus, after which they are sent to a nearby school. Free accommodation, food and clothing are provided, along with physiotherapy, calipers, wheelchairs and medical treatment. 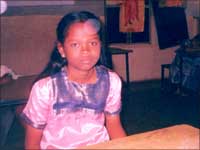 S Pooamma (left) is in Class VI. She goes to a Tamil medium school, wants to be policewoman and has been at the centre for seven years. "I like it here," she smiles. Her day begins at 5 am. School is from 8.30 am to 5 pm. They exercise every evening and there is no television. Tuition is followed by dinner and bedtime.

V Radha belongs to Panpoli village. She has been in this home since kindergarten and is now in Class XI. 'I am going to be a chartered accountant,' she says and feels she could make a good accountant because she likes Maths. Her father is a farmer and she visits her family once a month.

N Armugam has been at the centre for 11 years. With aspirations to become an engineer, the Class XI student is also a very good artist. One of his drawings won a competition in Delhi for which he received Rs 250.

He along with some other children from the centre, studies at a higher secondary school five kms away. The Amar Seva Sangam has a van that takes children to school and brings them back.

Armugam goes home on the last weekend of every month. During his last summer vacation, he stayed back to learn a vocation and studied computers, making toys, and bookbinding.

Another child, S Mariappan, is 15 and studies in Class VII. He has been here for the last ten years and goes to the school within the campus.

The campus also has a daycare spastic centre for the mentally challenged and for children suffering from cerebral palsy. G Gomu is one of the six teachers who works here.

"The first thing we do is assess the children who are mentally challenged," says Gomu. There are 44 children between 6 and 16, who come here everyday from the surrounding 10 villages.

A bus from the ashram goes and brings them to school everyday and drops them back home. Everything is free here for the children.

"Those who are better, we teach and send them to regular school," Gomu explains. "Others we send for vocational training. We also try to train them in the work their parents do. Some have grocery stores, others have STD booths."

The centre has a physiotherapist and caliper therapist. Medicines when needed are given free to the kids.

The teachers train them and take them for talent contests, sports and cultural events. The children are also taught yoga.

The computer laboratory on the campus has more than 20 computers. The Indira Gandhi [Images] Open University has a study centre here along with the Tamil Nadu Polytechnic. Says Ramakrishnan, "All these facilities are free for the handicapped but for normal students we charge a fee."

One of the honorary advisers of the computer section is V O C S Chidambaram, a computer consultant from Chennai

who has worked in the United States for seven years. He is the grandson of freedom fighter V O Chidambaram who sailed a ship to break the British monopoly on shipping in India.

Says V O C S Chidambaram, "Datamatics-Mumbai and Chennai has given them a data entry job. They functioned as a BPO and this resulted in income generation here." They also have a management information service where they made software for small industries.

S Sankara Raman said the cost of running the centre was almost Rs 15 lakhs a month. Twelve per cent of the required funds came from the government while 60 per cent came from donations and 15 per cent from interest. They also made some money from the sale of notebooks.

500 students study in this school up to Class VIII while 60 are at the IGNOU study centre.

Sankara Raman said they had adopted 330 villages where they looked after all kinds of disabilities, both mental and physical. Field staff frequently visited villages to help create awareness about the causes of disabilities. Those in need were also offered physiotherapy and medical care at their doorstep.

"The biggest problem we face here is employment for the disabled," he says. "In professional courses disabled people face a lot of problems. They are denied admission even with very high marks."

He spends his time travelling to raise funds and attends seminars and lectures. On the day this reporter met him, he addressed a gathering of self help groups from the surrounding villages. The groups consisted only of handicapped people.

M Muthupandian, the coordinator of the Self Help Groups for Amar Seva, said they had organised 89 SHGs in 103 villages. Today, the leaders and members of these groups had gathered to share their problems and experiences.

Most of them felt that only the disabled could help other disabled. The physically able helped but only sometimes.

By coming together they had started earning for themselves. Some of them had small shops and phone booths. Others were manufacturing soap powder and selling them. As a group they could approach banks for loans. They also got a subsidy on the loans from the government.

There is a workshop that manufactures calipers which are given free of charge to those who need them. The physiotherapy unit helps in medical rehabilitation and also creates awareness for parents to help their wards.

Says Ramakrishnan, "Our success is because of the help we have received from other NGOs. My wife was always supportive and we have a dedicated staff." Forty per cent of the staff here are people with disabilities.

The institution has received numerous awards from the state and central governments and various NGOs. The most noteworthy award came in 2002 -- the 'Best Institution in the service of the disabled and uplift of rural poor' -- which was given by President A P J Abdul Kalam.

Ramakrishnan speaks with pride about the children from his home. One is in engineering college, two are studying law, another is doing a fine arts course while three otjers are pursuing a BEd degree.

He is now trying to motivate others to start an old age home here and also wants someone to start a home for patients with spinal injuries. A trust to find jobs is next on his agenda.

"Funds are always a problem. God alone is great -- he should guide us to go further. Now after many years I feel we have done something, but a lot more needs to be done."

Those who need to get in touch with Amar Seva Sangam can call 04633-267170 or e-mail amarseva@sancharnet.in. Its web site is www.amarseva.org

This feature was suggested to rediff.com by reader Raguraman VR. If you know other Indians who have made a difference to our country by their selfless actions, please e-mail us at India60@rediff.co.in