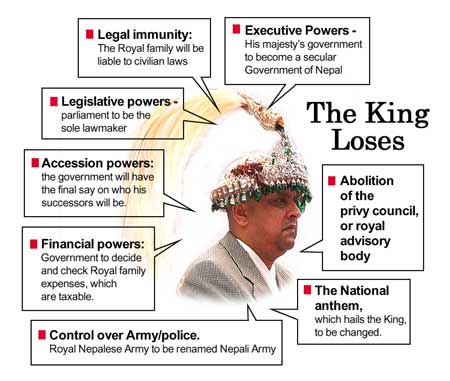 Lawmakers in Nepal's newly reinstated parliament overwhelmingly passed a resolution last Thursday stripping the royal family of most of its powers.

The resolution, which needs separate parliamentary legislation before it can become law, would make King Gyanendra, the scion of the Shah dynasty which has ruled Nepal since 1769, a mere figurehead.

Here's what the declaration, tabled by Prime Minister G P Koirala, and passed by a voice vote in Parliament, proposes:

But though Prime Minister G P Koirala declared that 'this proclamation represents the feelings of all the people,' and the resolution was passed overwhelmingly by the 205-member parliament, these proposed changes are likely to be legally challenged by the king on the grounds that they violate the current constitution.

More reports from Nepal | The resolution