Scientists were shocked, and the government ordered an investigation. Scientists concluded that the rain was red because winds had swept up dust from Arabia and dumped it on Kerala. But Dr Godfrey Louis, a Reader in Physics at the School of Pure and Applied Physics at the Mahatma Gandhi [Images] University in Kottayam, Kerala, was not convinced.

He diligently gathered rain samples and, after months of painstaking research, concluded: 'The red particles, which caused the red rain of Kerala, are of extraterrestrial origin.'

His colleagues -- other scientists and physicists -- frowned at the conclusion. But Dr Louis stuck to his theory. His scientific conclusions have now received international support. Dr Milton Wainwright of the micro-biology Department at Sheffield University in Britain has been examining some of the particles of the red rain samples that hit Kerala. And he has come out in support of Dr Louis' theory that the rains could belong to an alien life form. 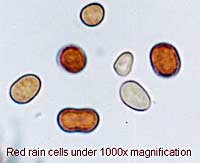 "I am indeed thrilled that my scientific conclusions have received international support and recognition," Dr Louis told rediff.com New Scientist Magazine, in its March cover story, has published the red rain phenomenon along with the doctor's theory.

How did he come to this conclusion, we asked. Dr Louis says the phenomenon first occurred at the place close to where he lives in Kerala. "The characteristics were very strange. Conventional explanations appeared totally inadequate. I started an investigation with limited resources and was greatly assisted by my research student A Santhosh Kumar," he says.

How did their investigations bring them to their interesting conclusion? "We arrived at it by analysing the various aspects associated with the phenomenon, like the geographical and time distribution pattern, and the nature of the particles," he says.

These are the findings:

But, what if these new scientific ideas are wrong? Dr Louis says that, if they are, he wants a better explanation for the phenomenon and the strange nature of the cells. "If these cells have a terrestrial origin, then it follows that they exist in huge quantities in some part of the Earth and are sure to have been noticed by some microbiologists. But there appears to be no such identification so far," he says.

Dr Louis' theory was initially ridiculed, but has now been accepted for research by international scientists like Dr Wainwright. His research has also been accepted for publication in the reputed international journal Astrophysics and Space Science. He is soon gearing up to publish the next set of results and conduct several collaborative studies to further unravel the mystery of the cells.