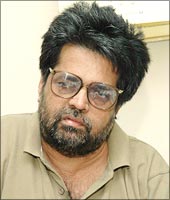 Professor P Radhakrishnan of the Madras Institute of Development Studies is a well-known social scientist. Some of the key areas of his research include affirmative action; agrarian problems; backward classes and reservations; backward class politics; caste system; untouchability; emancipation politics; globalisation and many others.

He tells rediff.com's Shobha Warrier how reservations in various forms came to be a part of Indian society and its ramifications in an exclusive interview.

When did reservations start in India?

It was actually started as a part of the patronage politics adopted by the British. As the administration of that time was monopolised by a particular group, there were demands from various groups, even with very little education, for representation.

Simultaneously, the British administration also looked into the representation of Muslims (it was known as representation then, not reservation) in public services and education. That was after the publication of the book Indian Mussalman by W W Hunter. So they were encouraging the Muslim community in some way or the other.

Any particular reason why the British administration stressed only on Muslims and not other communities? Divide and rule?

The Muslims were the rulers in India before the British came. They were also backward and not taking on English education. What is happening in north India was happening all over the country then.

This was one side. In south India, and also in Maharashtra, Brahmins monopolised the administration. In that context, the non-Brahmin movement started, and it was strong in the then Madras Presidency. The demand was for education and employment of non-Brahmins.

The death of meritocracy

It was Babasaheb Ambedkar who brought in the idea of reservations. He kept himself away from the Congress and worked on his own. In 1919, he appeared before the South Burroughs committee and made a series of remarks. He spoke of how divided Indian society was and what could happen if oppressed groups were left out.

So, he was the first leader who spoke in favour of reservations?

I would say, yes. When the Simon Commission came to India in 1928, it was boycotted by the Congress but the oppressed classes took it as an opportunity to present their case. They thought the Congress rule would be Brahmin rule, and it would be worse than British rule.

They made several demands such as, if India were to have a Constitution, there should be constitutional safeguards for the oppressed. And, that included reservations in public services. Ambedkar even specified the percentage.

Prime Minister, I have a question

At that time, why didn't they think of economic factors as the criterion for backwardness?

There was a lot of debate on the issue as some leaders wanted to have an economic criterion for reservation. But 90 per cent of the Indians were poor at that time. So, the argument was that reservation for all is reservation for none. It will not become an exception. So, they decided to club social backwardness and economic backwardness.

The original idea was to continue this reservation for just ten years. They thought things would change in that period.

Reservation which was meant for just ten years has been going on for nearly 60 years.

At Ground Zero of the quota protests

Another reason why everything went wrong was because the implementation did not go right. The system which existed during British rule is not there now. We have provisions in the Constitution but we don't have the mechanism to implement the programmes.

When did the idea of including Other Backward Classes in the reservation list originate?

The government issued a notice to the state governments that they can do what they want but reservation should preferably be on economic criteria. South India, because of the long history of movements, became the first to implement the recommendations.

'Education is the means of social mobility'

In Tamil Nadu, 87 to 88 per cent of the population come under the reservation bracket. Groups are included in the list arbitrarily by the politicians in power. In each group, there is a creamy layer and they grab the opportunities.

So, it is because of this 69 per cent reservation that in the south Indian states there were no protests against the Mandal Commission report as happened in the north?

There were only pro-reservation agitations in the south.

The middle class deserves what it is getting

Do Dalits in India feel cheated today because it is not they but the creamy layer of OBCs who are getting all the benefits of reservations?

Yes, that is a very important issue now. Nehru was indifferent to the reservations to OBCs. He was also against caste-based reservations while Ambedkar was for it; but Ambedkar also wanted to discontinue it after ten years.

'Middle class only bothers about itself'

The fact is, Dalits have not benefited much from reservations particularly because politicians are using the OBC category as a vote bank. Dalits are also a vote bank but they are small compared to the OBCs.

The recommendations made by the Mandal Commission are such that they dilute whatever facilities were given to Dalits. There is a long way for the Dalits to catch up with the advanced groups but politicians are not bothered.

There is a system in place for their well being but despite that, nothing much has been done.

Are Brahmins the Dalits of today?

You have to look at reservation at various levels; for Scheduled Castes and Scheduled Tribes on the one side and OBCs on the other. In the case of OBCs, many groups are advanced. They don't need reservations. Because of them, the benefits do not reach the really needy. And, there is no calculation by the government on the population of the OBCs and how much should be allotted to them.

Instead of OBCs, they should take only the MBCs (Most Backward Classes) and address their social problems.

Are politicians manipulating the entire issue of reservations and dividing the country and the student community?

Students do feel that politicians are trying to divide them. Today's politicians use reservations for garnering votes. So, there is a lot of anger in the student community.

As far as reservations are concerned, the government should have made an assessment of reservations in the last six decades. Then, if necessary, they should have come up with a better alternative.

Quota: A cure worse than the disease

Now, the issue is in safe hands because the Supreme Court has intervened. It is something similar to what happened during Mandal. It is a pleasure to read the judgments. You see a lot of collective wisdom in their work.

My feeling is that there will be a parallel exercise on education also. Now, we have that exercise only on job reservations.

'Nobody wants to hear us'

The youth of today are restless and full of resentment. Is it not dangerous?

'What more do the upper castes want?'

It is not dangerous. It is good. In a democracy, protests have to come out in some form or the other. I am impressed with the way they have organised the protests. It is all high-tech in tune with the globalised world.

A lot of rage, a little Rang De

In France [Images], the student community protested against the labour laws and won. In Athens, students are protesting but here in India, the protesting students were silenced. Is it right?

It is not right to silence students but the Supreme Court has intervened and they were given an assurance. I would not approve of the government silencing the students but the Supreme Court did it after giving them an assurance. The court did it in the public interest because the government was not suffering, the patients were. I don't think that amounts to silencing the students.

France is a developed country and this incident shows we are still a developing democracy. Yes, the question is, how can the State suppress students who are agitating for certain legitimate demands? But the students in India did not yield to the pressures of the State but listened to the wisdom of the judiciary. That is a very important issue. They seem to have a lot of faith in the judiciary.

I wrote that in the context of Union Human Resources Development Minister Arjun Singh's [Images] move to bring about the amendment. It is a great education muddle because there was a great opportunity for the government to reform the education system using directives of the Supreme Court.

No educational system in a large country like India can survive and improve without public-private partnership.

Students are bound to lose both ways, so also the State. It is in that context that I called the situation the great education muddle.