July 31, 2006
In 1979, Philip Roth, one of America's greatest living writers, wrote a novel called The Ghost Writer. It introduced readers to a character called Nathan Zuckerman, a 23-year-old writer in search of a suitable guide. Zuckerman comes into contact with famous novelist E I Lonoff, spends a weekend at his home, and comes to realize that his reclusive idol is far from the man he thought him to be.

As you begin to read That Summer in Paris, Dawesar's third novel, you find lines from The Ghost Writer as an epigraph, setting the tone: 'When you admire a writer, you become curious. You look for his secret. The clues to his puzzle...'

The novel is about a writer, 75-year old Nobel laureate Prem Rustum, his famous friends, relationships with women, and his art. On one of his first visits to a dating Web site, Rustum finds a 'twenty-something aspiring novelist' called Maya who adores his work. He responds, they meet, and he follows her to Paris in the hope that she will be his last great love affair.

The book uses the relationship between Prem and Maya -- and between Prem and another celebrated writer called Pascal Boutin -- to manoeuvre through discussions about love, literature, ageing and death. There is incestuous as well as illicit sex within its pages, and a great many ideas about the nature of writing and the 'blueprint' of a work of literature. Prem begins to come to terms with his past, while Maya learns to separate the author from his work.

Eventually, like Zuckerman in Roth's novel, Maya finds that idols can be surprisingly human in their vulnerability.

That Summer in Paris bears the imprint of much labour. Just as Prem Rustum creates his fiction, you can see how Dawesar intersperses fact with dialogue to create what is, in effect, a novel of ideas. It is, in some ways, surprisingly different from her earlier work -- her debut Miniplanner (published in India as The Three of Us) and Babyji, which was named 'one of the 10 best books of fiction for 2005' by The Boston Phoenix.

Born in New Delhi in 1974, Dawesar moved to America when she was 17, later spending a number of years in Paris. She is familiar with the city -- as her novel insists on proving -- and has clearly spent a lot of time grappling with the same issues as her character, Prem Rustum.

The only problem with That Summer in Paris is its tendency to alienate those who aren't terribly familiar with art, poetry, the French language and literature.

Large portions of conversation between Prem and Maya tend to sound pretentious, what with Maya's insistence on mentioning poets like Rimbaud, Prem's angst when confronted with sculpture by Aristide Maillol, or his fondly using the Aristotelian word 'peripatetic' to describe his young companion. 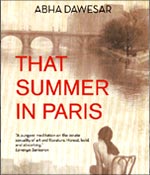 Still, after you roll your eyes and get past the tedious references liberally strewn on some pages, you are left with an extremely insightful novel that has a lot more going for it than against.

The themes may be heavy, but the writing is light, often playful. For instance, when Prem is upset with Maya, she notices he has forgotten -- or, rather, refused -- to offer her his sachet of sugar for her coffee. Or, in another instance, when Prem uses his celebrity status to coerce his agent.

Abha Dawesar has taken her time, but is finally beginning to live up to the promise she has always shown as a writer. Lindsay Pereira had a discussion with the author about her novel, forthcoming projects, and issues that keep her up at night.

The fluidity of sexual identity is an important theme in your work. Where does this interest come from -- is it academic, or an attempt on your part to understand the nature of desire?

I studied political philosophy in college and don't really see a difference between understanding human desire and an academic attempt at comprehending the human condition. They are both part of the same project.

Fiction and literature allow for an exploration that is different from a philosophic study but in the end, can inform us just as much as academic attempts. I am motivated by understanding various aspects of the human condition.

Kiran Nagarkar: 'Most of our writing is abysmal'

Going by your writing, unconventional relationships appear to be a given. The Three of Us involved a 24-year old boy's relationship with his boss, as well as the boss' wife. Babyji was about the bond between a young girl and her maidservant. Is the exploration of a conventional affair simply unappealing to you?

One of my ongoing projects is about a seemingly conventional affair. It is an exploration of how nothing is really conventional. All people are quirky and, though many couples may live lives that are conformist, what is happening below the surface is often complicated.

This project has been fraught with all sorts of interruptions since I have worked on two other novels while working on it; so it's anyone's guess when I will actually complete it.

Relationships are often mirrors of situations in the real world, which have no connection to romance (for example, power or weakness or individual identity) and I always learn about larger issues when writing these stories.

What would you say is the biggest difference the Internet has made to the way Indians now address the topic of sexuality?

Our society is somewhat riddled by outward appearance and constraints. The private domain of an average individual is restricted. The Internet (along with SMS) has been able to provide a sort of private channel of communication that people cannot otherwise have due to lack of private time and space.

This is a double-edged sword though because, with the rise in individual liberty and aspirations, traditional relationships (not just marital ones) are bound to suffer, at least for a certain period of time, as people explore their deeply personal needs.

Your fiction has moved from studies of small voices to encompass larger, more universal themes. That Summer in Paris is really your first 'novel of ideas'. Did that happen simply because you are older and more comfortable with the craft of writing, or because you wanted to grapple with larger issues?

I would disagree. Babyji has a lot of subtext. While there is no direct pontificating (it would be inappropriate for a first person narrative in the voice of a young girl), the characters personify and represent various equations of domination and power (among other things).

In my first novel, because I wrote it just after graduating, I think I was tired of dry academic prose and wanted to encapsulate ideas as much as possible within the story. I wanted it to be racy so it reflected the spirit of New York.

My new book is coming from a different space; the character of Rustum, who is old, makes it possible to have discussions on myriad issues. His camaraderie with Pascal makes a lot of dialogue possible on art, literature and ageing. Once again, in a sense, I have done the same thing as with my other novels -- chosen characters that could discuss the issues of their age.

Is Prem Rustum modelled on any author in particular? There are references to a number of works by Philip Roth, for instance. Are you a 'worshipper at the altar' of Roth?

Rustum is not modelled on any real person, because part of the enormous fun of writing is to create someone who doesn't exist and make him come alive for myself. Reality is a stifling constraint for me in terms of my writing, which is why I am a writer of fiction.

I have enjoyed Roth's writing tremendously in the past few years, but alongside that of Marguerite Duras, who I have also read in some depth. Of late, my reading has flitted from (Jose) Saramago to (Witold) Gombrowicz to (Saul) Bellow.

As a writer, I always find inspiration in other writing, but also in art. If I had to write a book about ultimate admiration, however, the only person I could think of modelling it on is the Platonic Socrates -- Socrates as he appears in some of Plato's dialogues.

Jerry Pinto: 'You cannot think of another Helen...'

As a young author of Indian origin, what are the kinds of issues you are occupied with today -- the things you stay up at night worrying about?

Violence around us. In the eighties and nineties, I was really a lot more optimistic about world politics and the eventual convergence of humanity toward certain common goals that would unite us. The utter impossibility of that is now clear.

As a species, our instinct for domination is an animal drive that is reflected in gender relations, religious conflict and national wars -- as it always was. But we have modern technology at our disposal, which makes the stakes very high.

Despite its somewhat unromantic side, science gives me hope, because the scientific paradigm encourages, even necessitates, cooperation across traditional boundaries. But, it comes with its own set of disenchantments.

I found it interesting that your web site featured photographs of paintings at the Musee d'Orsay in Paris and a number of other locations to which references are made in your book. It makes the experience a lot richer for the reader. Do you intend to work on similar marriages between art forms in future?

Yes, but not necessarily in terms of photographs. For my next book, which is about a young boy, I am more interested in a set of simple sketches. For the ongoing never-ending project I mentioned earlier, I am interested in some other form of collaborative art -- I am not sure what, yet.

Altaf Tyrewala: No God in sight

In a recent interview, you talked about India being in the throes of some sort of sexual revolution. What exactly did you mean?

As I was saying in response to your earlier question, with the middle-class growing and an increasing number of women becoming financially independent, there has been a marked increase in seeking personal fulfilment in relationships. I don't think this was a preoccupation for an earlier generation that really followed or tried to follow a set-down path.

I also think we will, as a culture, survive some of the ills of modernisation that other societies have handled badly. However, we can expect to see some upheaval along the way.

How do Indian readers usually react to your work, considering we are usually too reticent about sexuality to even admit to being homophobic?

I usually only hear from people who have been open-minded enough to pick up and read my books! It's hard to really know what the other side is thinking.

Is there any Indian writer abroad who has attracted your attention lately? Someone whose work you would like to recommend?

I wish I could, because I have always enjoyed reading Indian writing in English. But my own reading for the past few years has been heavily centred on my writing projects, which involve young boys, French characters, and science.

One great online resource for South-Asian literature is Desilit, which provides links to other lists of writing by South-Asian writers, including books for children.