That Ian Anderson's wit can cut you down to size is evident from his All Too Frequently Asked Questions note to journalists, where he emulates a routine interview.

Sample this answer to the question 'Do you have Family? A wife? Children? Where do you live?' 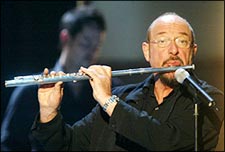 Ian Anderson: 'I enjoy the company and love of my wife of 23 years, Shona, two children, James and Gael, both at University, five cats, two dogs and some horses and chickens. We live in an eighteenth century English country house with a recording studio, 400 acres of wheat, barley and trees about 100 miles west of London [Images]. Disgusting isn't it? Want to swap? Thought so.'

So, in the second part of his interview with the Jethro Tull frontman, talented guitarist and Features Editor Sumit Bhattacharya treads carefully with his questions till rock's most famous flautist wraps up the telephone conversation with a genial, "Thank you for your time and attention."

When you tour a country do you consciously take the time out to watch people and observe the culture or is it just fly in, give interviews, play and fly out?

Sometimes, regrettably, it is fly in, give a few interviews, play a couple of shows and fly out. But in that brief time, as a working musician, you are interfacing with people both in the audience and the people around you -- the people in the media, the people you are working with on a more pedantic level, the crew, people in the venue� If you keep your ears and eyes open you still learn a lot about a country when you are there working with people.

I think the danger is as a tourist if you come in, then you are either going to remain in your little beachside bubble or you are going to be transported around the five essential things a tourist must do. You are transported in your little bubble with your tour guide who carefully edits out the bad bits and makes sure you receive the good bits. And that isn't necessarily the most productive of experiences. Nothing wrong with it, but it's not going to perhaps give you as much as I think I get because I'm there in a working capacity.

I'm there to become involved with in a very direct and sometimes quite emotional way. So I think I learn more when I come to work and do concerts than I would as a tourist.

Coming to music, you had said in an interview that Hotel California was 'stolen' from a Jethro Tull song.

Well I have never made that allegation.

I have pointed out that other people have told me that. And I think they wouldn't use the word 'stolen' -- that's a little over-ambitious, a little over-egging the reality. I know The Eagles played with Jethro Tull when they first started. They were actually our support band in 1972. And I believe at that time we may well have been playing that song -- my song which they said Hotel California was like (Hums the tune, which sounds the same as On a dark desert highway, cool wind in my hair). We used to know, it was called. And the thing is Hotel California shares something of the same melody but definitely the same chord sequence.

I have always said -- in good humour and joking spirit -- 'Hey, I wish I had written Hotel California. Well maybe I did!'

People hear, it's not deliberate plagiarism. They hear something, and quite often accidentally -- or sometimes intentionally -- will take elements of somebody else's work and incorporate it into their own.

But I take that as a compliment, not as an insult, or having something stolen from me.

There are only 12 notes in the Western musical scale. The chances are in your lifetime as a songwriter and musician you're going to find yourself picking out of those 12 notes -- a few of them in the same order that somebody else did.

As you can imagine, it's getting harder and harder for people to write original-sounding music as we go on. We tend to be rather boringly recreating and reusing ideas that have been from the past 50 years of music.

So contemporary pop and rock music is very often incredibly familiar-sounding to old codgers like me who think, 'Oh, I think I've heard that before.'

It doesn't necessarily mean someone's stolen something. As long as I can remember, there have been lots of cases where things have sounded uncannily like something else, but we shouldn't get our knickers in a twist. 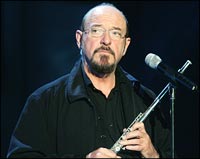 In your All Too Frequently Asked Questions section, you've said music never really changes. So would you say there is no new frontier possible in music anymore?

Well we only have two ears, you know. We have physical constraints -- we have two ears and a certain range of sounds and noises that we find physiologically acceptable; they are not unpleasant noises.

There are lots of noises that actually just make us screw our faces up and we don't like them because they are too loud or too shrill� They are never going to be good musical noises. Music tends to be a little sweeter on the ear.

So we are bound by a physiological condition. Homo Sapiens has a brain and certain receptors that limit what we can call music. Unless we grow more ears or bigger ears or different kinds of ears we are not going to find that we can expand terribly upon the number of sounds that we call musical.

What contemporary musicians have to work with is their own imaginations -- rather more importantly than new technology or new instruments or new skills. Your imagination is the most powerful instrument you have. And that's the one you need to use mostly, even if you're not perhaps the greatest technical expert of your instrument in the world. Doesn't mean you can't write great songs.

I think that's an important thing to remember. And all the computers and all the software written for the computers and contemporary synthesised music they will not make you a great musician. They will just make it easier for you to get a result � but not necessarily a great result.

Is that why experimenting with genres becomes almost a must for musicians who want to keep evolving?

I think you should have open ears to other kinds of music and other cultures. The music comes not only just from musicians who dwell in a musical world. Sometimes the music comes out of aspects of culture that make you perhaps have to think a little more carefully about what you're doing.

There's a lot of music that comes from religious celebration, lot of music comes from other forms of celebration that perhaps have a cultural reference that is alien to us or the way we hear the music. So you have to be a little careful that you're not accidentally slipping into some musical expression that may have connotations to other people that you don't intend.

It would be difficult for me, for example, if I was particularly fond of singing what, when I was a child, were called 'Negro spirituals' -- these days politely termed 'gospel music'. If that was my forte, you know if I had just loved the music, I would have to stop and think, 'Wait a minute. I'm singing something here that is actually about usually rather evangelical Christian music. Is that what I want to do?' And the answer is 'No I don't.' So I kind of steer clear of stuff that is going to sound like gospel music (laughs).

You have to be a little aware of those things, you know. You don't want to tread on the toes of other people, or pretend to be, or come across as being something you don't really intend. Pure, abstract music sometimes has to be considered.

For me to sing black music would be, I always thought, rather absurd. So when I was a teenager listening to black-American blues, it was never really my desire to try and make a living doing black-American blues. Primarily because I wasn't black, and secondly I wasn't American. Thirdly and perhaps more importantly, I couldn't really lay claim.

As a white middle class English boy I could never learn those experiences that gave rise to that music. It's just not something that you can take on mentally from afar. If you haven't been born and grown up with that, it's not in your genes. By all means, take something of a pure musical nature from it, but don't try to convince yourself that you're a real blues musician. I always find that a little absurd. And I'm uneasy when I hear white people playing, concentrating solely on a musical format that they can never really justifiably lay claim to as their own.

But is it always that conscious a decision?

It's not conscious. But when you're asked to rationalise it, when you're asked to intellectualise it -- as obviously I am by journalists, or I might do myself in some ruminating mood, then I'll think it through. But most of the time it's reacting to a piece of music that you're just excited by and moved by and you take a little from it, you learn something from it. But hopefully without plagiarising and hopefully without getting yourself confused as to the implications of some of that music in a more cultural or religious sense.

Where do you love performing the most? And please don't say India because you're due here.

India, honestly, wouldn't be at the top of my list because it is a tough place to play. Not just from the point of view of being there and playing but actually getting there and getting the permission to play there and finding people who can organise concerts for you.

Because it's a tough nut to crack, that's why so few bands play in India. It is really, really hard to put on shows there, and to get there and the economics of it are not really favourable. Because it's expensive to get there and expensive to be there and you don't actually make that much money when you are there by Western standards. So it certainly wouldn't be top of most people's list.

But it's a challenge; it's fascinating and very rewarding once you actually get there.