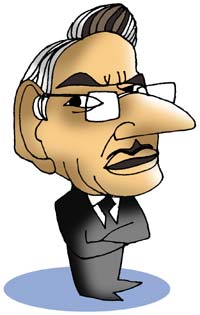 Who will India's next home minister be?

Now that the prime minister himself has spoken about the likelihood of a reshuffle after this weekend's Congress session in Hyderabad, there is a clamber for getting on board the ministerial bus.

Among the hopefuls is Congress spokesman Anand Sharma and Pune businessman Suresh Kalmadi.

The convener of the party's economic cell, Jairam Ramesh, is a strong contender as is Ambika Soni.

But the real interest lies in whether the so-called big three in the government will have their portfolios shuffled.

The biggest argument dictating a change of portfolios is Shivraj Patil's lack-lustre performance in the home ministry.

Known as 'protocol officer' among his colleagues because of his insistence on pulling rank, Patil (in the sketch above) has lent weight to the speculation that he might be accommodated in defence so the far more politically sensitive home ministry is handled by someone with the requisite intellectual and political muscle.

In that case, Pranab Mukherjee may be moved to external affairs and P Chidambaram to home, with finance going to a specialist inductee from the Rajya Sabha pool.

Unless the government is pressured again to defer implementation of the court order, several politicians, former bureaucrats and media-associated persons will have to forgo subsidised housing at the end of the month.

Even though he has been paying the market rent of nearly Rs 200,000 for retaining the bungalow, Yadav is reluctant to let go of it.

In the case of journalists, quite a few retired many years ago, while some have never merited the title.

At least one occupant of a house in the media pool had rather dubious journalistic credentials, while another opened a PR-cum-ad agency nearly two decades ago but continues to stay on.

One of the suspects arrested in connection with the phone tapping of Samajwadi Party leader Amar Singh is known to be an old pro in these matters in Delhi's business circles.

With his office in Connaught Place, he has been making his services available to the highest bidder.

Given the nature of his work, he has maintained excellent relations with various official intelligence agencies, including the Intelligence Bureau and Central Bureau of Investigation.

The exchange of information has been mutually beneficial. That would explain why he is being treated with kid gloves while in detention.

It is more or less certain that the RSS leadership has concluded that Sanjay Joshi is innocent, a victim of a frame-up by a former pracharak whose relations with a woman are the cause of salacious gossip in his home state.

The former pracharak, it is argued, arranged through a Delhi-based television channel to have the spurious CDs circulated on the eve of the recent BJP meet in Mumbai.

Now, because the RSS leadership is convinced of Joshi's innocence, he may soon be rehabilitated, much to the chagrin of the former 'pracharak' who had come to consider him a threat in the BJP. 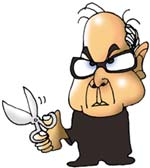 It is wrong to say that Defence Minister Pranab Mukherjee, in the unusual role of chief censor, did not prescribe any cuts in the forthcoming Aamir Khan [Images] movie, Rang De Basanti [Images]. He did.

As Aamir had no choice, these were duly carried out. Of the four, the vital one Khan was reluctant to enforce pertained to a scroll that runs on screen at the end of the film, listing the names of pilots who died in scores of MiG accidents over the years.

The minister endorsed the view of service chiefs who previewed the film with him that the scroll of honour would have a demoralising effect on defence personnel.

Keen not to disturb the film's scheduled release later this month, Aamir gave in without a fight.

Keen observers of the political scene are struck by the subtle shift in the BJP's response to the government's unilateral move to de-freeze Bofors suspect Ottavio Quattorocchi's bank accounts in London [Images].

When the scandal first hit the headlines in the late 1980s, the party was shrill in its charge that Quattorocchi was fronting for Sonia Gandhi [Images] and her Italian relatives, which was why he was able to swing the deal in favour of the Swedish gun-maker.

The reason for a muted BJP response is not difficult to fathom. The party itself became vulnerable during the six years it wielded power in New Delhi.

Now many skeletons lie not-so-hidden in the cupboards of its leaders.