Spirituality transcends religion and culture. Whatever angle you look at it from, whatever religious colour or tint you give 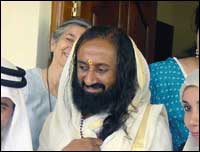 it, the experience is essentially from the same tradition.' Sri Sri Ravi Shankar, founder of the Art of Loving Foundation, which celebrates its 25th anniversary this year, believes that his organisation does not adhere to any one religion.

In his continuing conversation with Editor Saisuresh Sivaswamy and Nikhil Lakshman, His Holiness discusses the desire for spirituality and how certain people use spirituality for ulterior motives. The third segment of a five-part interview:

Part I: 'The overwhelming problem is terrorism'

Your followers say you have made ancient practices like yoga, meditation etc simpler and thus made it more accessible. How do you look at what you have done through the Art of Living Foundation?

We need to look at the scientific angle to our spiritualism, knowledge. Without dogma, without presumptions. And with honour and respect. That is what we have done.

On one hand we are honouring the sacred traditions, at the same time we are not being prejudiced or dogmatic about anything. There are certain things in our practices that are not so scientific or authorised by our shastras, scriptures, then we move away from them. That really appeals to people.

Will you call the Art of Living Foundation an organisation that has its moorings in Hinduism? Or does it transcend Hinduism?

Spirituality transcends religion and culture. The greatest spiritual truths have been given through the foundations of Vedanta, yoga etc. Today the whole world is saying it, whether it is Sufism or the new mystic experience. They derive from ancient yoga -- the Vedanta system.

In fact, everybody proclaims truth is only one. Whatever angle you look at it from, what religious colour or tint you give it, is different, but the experience is essentially from the same tradition.

Francois Gautier wrote a column on rediff.com where he made an impassioned plea for all spiritual gurus to come together and take Hinduism forward. Would you be part of such a movement?

Everybody is doing their own way for the betterment of human life. Our contexts are different, our methods are different, but there is no conflict. It is not coming from a space of fear, knowledge (that) religion or spirituality is in danger.

We are not moving from that sense of fear or insecurity, or to protect something. People need spirituality. That is why many different organisations are there. I don't think there's any conflict.

There seems to be as many spiritual gurus in India as there are Indians. Is that a good thing?

Why not? That's okay. India has always been renowned for diversity and difference of opinion. Harmony in diversity.

But people should not misuse the trust people have. Certain people are misusing the trust our population has in the ancient tradition of knowledge. And that is unfortunate. They are using spirituality for their own ulterior motives.

Would you care to name these people?

In the name of god, healing and spirituality people are taken for a ride. One reads in the newspapers constantly of Indians killing Indians over religion, it could be over a mosque, temple, church, any place of worship.

What do you think can be done to prevent such a situation? Why are Indians intent on killing each other?

I don't know if it is religion, social injustice or caste violence. Any form of violence comes from a sense of frustration and a lack of knowledge of how to handle it. Education in human rights teaches you how to handle violence.

We need to bring people closer, together, not keep them apart in caste, community etc. Politics is playing a very big role in keeping communities apart in terms of religion etc. That is a very dangerous thing for the unity of this country. There should be justice and equality.

Are you against what politicians of the Right call minority appeasement?

Appeasement is only short-term, you know, for political reasons. It is not in good taste, it is not good for the people in the long term, for the nation.

The Art of Living Blog

A few days before the Gujarat riots you told our newspaper India Abroad that a Hindu cannot be a fundamentalist. In the light of the subsequent violence, do you still hold the same view?

See, fundamentalism in one religion will cast a shadow over the other religion as well. You can't expect any one religion to not have fundamentalists if it is in the other one. If you see what happened in Bangkok, even in Buddhism, the most peace-loving religion in the world, they had to rise up in arms.

In Bangkok, they had to revolt in many areas because a sense of insecurity comes in different communities. So people get into this sort of fundamentalism and such attitude. The only remedy is to lift people up to a spiritual level from their religious identity.

Today there are fringe elements almost in every religion.

Part IV: 'Knowledge should be free for all'

Don't miss the next segment of our exclusive interview with Sri Sri Ravi Shankar tomorrow!