December 06, 2006
During a war, there are just four possibilities a soldier faces.

One, victorious and safe. Two: wounded. Three: killed in action. And four, a Prisoner of War.

It was my fate to face the fourth.

December 5, 1971. Six Gorkha soldiers and I were on a reconnaissance patrol on the western border in Punjab, along the Ravi river, when the Pakistani army launched a sudden attack through that area. We were literally caught between a rock and a hard place as we were initially shelled by Pakistani guns, and later, as they overran the small border pocket, by Indian artillery.

Thankfully, neither side hit us, and less than 48 hours later, the active war ended for me and my six men.

My ordeal, however, had just begun.

They say memories of stress and extreme danger remain with us forever. Thirty-five years have passed, yet the memories of that time are as fresh in my mind as if it all took place yesterday.

Almost immediately I was evacuated to the Pakistani army's General Headquarters in Rawalpindi, possibly because I was the only officer they had captured so far. 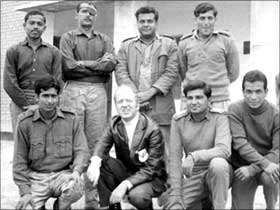 My interrogators soon realised that I was useless as a source of information. With just three years of military service, I was far too junior to be privy to strategic secrets. Besides, an infantryman's view of the war is at best a worm's eye view, limited to a radius of four to five kilometres from his position.

In your own area of operation, small trees, a few mud huts, a few feet high mound of earth are all of vital importance. But this tactical information, specially in the plains, is of no earthly use to the enemy.

In addition, I had just come to the battalion after finishing a training course in Mhow, and was thus even more clueless about the larger picture. All this went in my favour, and that is possibly why I had a relatively easy time during the interrogation and survived to tell the tale.

But the fear factor was very much present in the shape of the gallant Indian Air Force.

For every sunrise, sunset and midnight, Rawalpindi was subjected to IAF air raids. The cell in which I was lodged had an anti-aircraft gun located right on top, and the entire complex would vibrate from its recoil as it fired at the attacking aircraft.

The first time this happened at midnight, I immediately woke up and put on my boots, ready to escape in case a bomb fell on the cell. After a while it became a routine affair, and I stopped reacting that way. Luckily for me, there were no direct hits on the interrogation centre.

In fact, the constant bombing raids did wonders for my morale, even as it decimated that of the Pakistanis'. Every time an air raid took place, I could hear the sentries hurling choicest Punjabi abuses at the aircraft, shaking their fists in frustration.

The 1971 war: The Road to Dhaka | Should India have helped liberate Bangladesh?

Within a fortnight I was shifted to Rawalpindi jail and lodged in the maximum security cells meant for condemned prisoners. To prevent prisoners from committing suicide, these cells had high ceilings and nothing inside. By now the air raids had stopped, and I could guess that the war was over.

While I was in solitary confinement in my cell, I would often hear noises from other prison barracks. Every now and then the prisoners there would shout slogans like 'Pakistan Murdabad', 'Indira Gandhi Zindabad' and 'General Arora Zindabad.'

Who were these people?

Finally, after repeated queries, a sentry told me they were 'those **** Baluchis'. Apparently, during the war, there were processions and protests in Baluchistan against Pakistani rule, and many Baluch leaders were jailed. Is the situation much different today?

One day, a major (as I deduced from his shoulder patches) from the Pakistani army's General Headquarters paid me an unexpected visit. His week-old stubble and bleary eyes spoke of immense stress and sleepless nights. He looked at me grimly and asked if I had seen Rawalpindi.

I had been blindfolded during my journey and later confined to my cell, I replied. All of a sudden, he blurted out: 'Don't worry, one day you will come here as a conqueror and you can see it to your heart's content!'

I was flabbergasted. This was the first indication that we had indeed won the war.

Even 35 years after the event, I can recall the scene vividly. For non-military folk, a major from the GHQ operations branch was a big shot. Even in our own army, an officer of a major's rank used to head the entire internal security section till the 1980s.

Close to December 31, I heard a massive procession passing by outside, shouting slogans like 'Quaid-e-Azam Bhutto Zindabad.'

An hour later, I heard the same procession again, but the slogans this time were different. 'Hamara Naya Sardar Bhutto Zindabad' (Victory to our new President Bhutto).

I told my sentry that there had been a coup in his country, and they had a new president.

It was much later that I learnt that the old Rawalpindi jail where I was housed was adjacent to the president's palace. I also came to know later that Zulfiqar Ali Bhutto was kept in those very cells for condemned prisoners before being hanged by Zia-ul Haq in 1979. Benazir Bhutto [Images] during her premiership ordered the demolition of the old jail, and there is a public park in its place now.

By now the atmosphere in the jail had become a lot less tense. A Pakistani army officer told me the story of the coup. How when Zulfiqar Ali Bhutto confronted General Yahya Khan with a resignation letter, he refused. How Yahya's aide-de-camp took out his pistol and threatened Yahya, who then signed the resignation, literally at gunpoint.

In February, I was shifted to a proper prisoner of war camp in Lyallpur (now Faisalabad), where I joined five other Indian army officers.