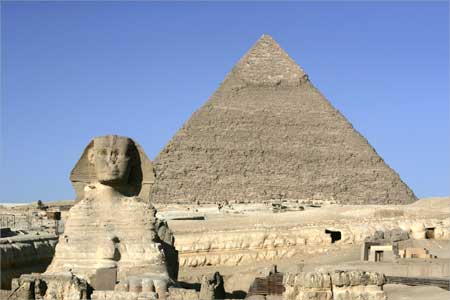 The ancient Egyptians built their great Pyramids by pouring concrete into blocks high on the site rather than hauling up giant stones, according to a new Franco-American study, The Times, London [Images] reported.

The research, by materials scientists, adds fuel to a theory that the pharaohs' craftsmen had enough skill and materials at hand to cast the two-tonne limestone blocks that dress the Cheops and other Pyramids. Despite mounting support from scientists, Egyptologists have rejected the concrete claim, first made in the late 1970s by Joseph Davidovits, a French chemist.

The stones, say the historians and archeologists, were all carved from nearby quarries, heaved up huge ramps and set in place by armies of workers. Some dissenters say that levers or pulleys were used, even though the wheel had not been invented at that time, the paper reported.

Until recently it was hard for geologists to distinguish between natural limestone and the kind that would have been made by reconstituting liquefied lime.  But according to Professor Gilles Hug, of the French National Aerospace Research Agency (Onera), and Professor Michel Barsoum, of Drexel University in Philadelphia, the covering of the great Pyramids at Giza consists of two types of stone: one from the quarries and one man-made.

"There's no way around it. The chemistry is well and truly different," Professor Hug told Science et Vie magazine. Their study is being published this month in the Journal of the American Ceramic Society. The pair used X-rays, a plasma torch and electron microscopes to compare small fragments from pyramids with stone from the Toura and Maadi quarries. They found "traces of a rapid chemical reaction which did not allow natural crystalisation. The reaction would be inexplicable if the stones were quarried, but perfectly comprehensible if one accepts that they were cast like concrete."

The pair believe that the concrete method was used only for the stones on the higher levels of the Pyramids. There are some 2.5 million stone blocks on the Cheops Pyramid. The 10-tonne granite blocks at their heart were also natural, they say. The professors agree with the "Davidovits theory" that soft limestone was quarried on the damp south side of the Giza Plateau. This was then dissolved in large, Nile-fed pools until it became a watery slurry.

Lime from fireplace ash and salt were mixed in with it. The water evaporated, leaving a moist, clay-like mixture. This wet "concrete" would have been carried to the site and packed into wooden moulds where it would set hard in a few days. Davidovits and his team at the Geopolymer Institute at Saint-Quentin tested the method recently, producing a large block of concrete limestone in ten days.

The concrete theorists also point out differences in density of the pyramid stones, which have a higher mass near the bottom and bubbles near the top, like old-style cement blocks. Opponents of the theory dispute the scientific evidence. They also say that the diverse shapes of the stones show that moulds were not used. They add that a huge amount of limestone chalk and burnt wood would have been needed to make the concrete, while the Egyptians had the manpower to hoist all the natural stone they wanted, the paper said.