Michael Peschardt, one of BBC's senior foreign correspondents, launched a new 13-part series on BBC World in April. Peschardt's People will give viewers a chance to take a look at the lives of some of the most famous and infamous people in the Asia-Pacific region. 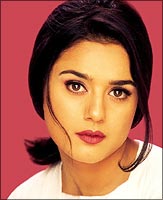 On April 22, his interview with actress Preity Zinta [Images] was telecast in which she spoke about her celebrity and what she wants in the new and changing India.

Excerpts from the interview:

I've only been in this Bollywood studio, I think from half an hour and I've already been offered a job!

Excellent. You see that's why we make so many movies. We have work for everybody.

Yes, even me. Quite strange.

You see in India, most of the people are not educated. They don't all go to school. So they really look up to films. So it's important to give them films that are entertaining as well as a bit educative, you know, progressive. Not just one of the run of the mill films because there is a lot of awareness today. There are a lot of television channels today. You have access to HBO, Star Movies, everything you know. So, when that is there, the audiences are changing, the audiences are very particular. They don't want the same stuff that you were churning out and giving to them ten years ago.

When you say an educational message, what sort of thing do you mean by that?

You know, let's say doing a film on HIV.

If you do a film on HIV, I mean you could make a documentary on HIV and nobody would really look at it. But if you have a film with big stars, people will go and see that film. And looking at that film they'll know that Oh! if a hero can catch HIV, so can I. You know there are a lot of things. You have to kind of cushion it and cocoon it around glamour and everything.

Yes. So what I am saying is just simple things, small things like you know we make films on corruption, we make films on the political infrastructure of the country. It's just a way to put it across to the people. Though at the end of the day we are not doing it to be good human beings, we are doing it to make money but�

I've noticed you are interested in current affairs and you sometimes write articles about things for the BBC. What sort of things do you want to bring up from that?

So you were completely unaware?

Yes, I opened the door and there was no hotel. Everything was just flying around the place. Trees, they had jet skis on them and the tar from the road had been uprooted and there were bodies all over the place. It was quite ugly.

I don't know how this place is but I suppose there has been in the past a tendency for big disasters that happened in India and perhaps the rest of the world was ok? Natural disasters and several tragedies tend to happen here. There are a lot of people dying on the road for instance.

Exactly. That's because the value for life is much less here than anywhere in the West.

Priety Zinta sticks to her stand in Bharat Shah case

Well, I've tried to understand that too, I can't but, I think it's just the value for life and till 9/11 happened, I mean half of the world didn't really know how it was to live. India's always had Kashmir, we have always had problems in Kashmir, we've always had people dying in Kashmir, but it had to take something like a 9/11 to happen in New York for the West to actually understand. Because I remember I was in America at that time and I remember that they were saying that 'Oh! this doesn't happen in America, this only happens in Beirut'. So they were so shocked that something like this was happening. It was very, very sad. But the good thing about the West is that when 9/11 happened you could see the people bonding, you could see kind of everybody coming together�

Is that bonding is not happening all the time in India?

I think it already exists in India. People are more friendly, they are more outgoing. I mean, I can go to any of my friend's house anytime, unannounced and even if she is not there her mother is going to take care of me� she'll feed me, she'll be like are you alright and if I don't have a car her brother is going to come and drop me. In the West if you have to go and meet someone, you have to call them because everybody is busy, you have to take an appointment. So it's a whole different cultural thing I believe.

You have very strong views about the startling rate of change in India.

It's very tough to change the mindset of a country if you have a lot of old people. These people are already conditioned in the way of thinking, in the way of living. So it's a great that we have a young country but I hope that things change in India faster because when you have a lot of young people, the changes that you want can happen much faster.

I wonder, in terms of the overall image of India, whether you think the rest of the world has actually woken up to how India has changed or is changing?

Well, I think, the rest of the world is waking up to India because our economy is changing. I mean I don't have the exact percent but I think we have an 8.35 percent growth rate and it is fabulous. Today, India is one of the few countries where people are looking to the West and they know that this is the country that is growing and you can go and invest in there. Plus our cinema, the audiences have changed for our cinema. Earlier on it was just Indians that lived abroad. Today there are Indians, there are people from Pakistan, Bangladesh, Africa, from the Middle-East, from Malaysia. So the audiences have changed completely. There are lot more people watching Indian films and people like Indian films because they are very strong on the family quotient. Somewhere we are kind of exporting our culture with our films.

What sort of changes do you want here?

Well, a better infrastructure in the country, a better government. I mean we have a great country. I'm not complaining but I think simple things like infrastructure, simple things that are required in this country, so that India would not be a Third World country anymore. See basically, young people are restless by nature you know. They are restless, they want change and they would try to do this and hopefully it's going to happen.

Do you get a sense that young Indians are restless like that?

Most definitely, most definitely. The youth, anywhere in the world is always restless. They always want to cover those two steps faster than their fathers or their forefathers. Their way of thinking is different and India has changed drastically over the last five or seven years.

Are there going to be changes in that because that restlessness, that want for change is obviously a very good thing but there can be problems with it?

Yes, but I think that is why we need great leadership, we need a great government. Right now our government is almost like a headless enemy you know because we have so many parties that if a particular issue is brought up it goes from one party to the other and they keep passing the parcel on, unlike let's say Britain where you have a dual party system, where if one party does something, the other party is there to check it. Here we have so many parties that it just keeps going round and round and round and then people say 'this too shall pass'.

How is that going to manipulate?

Well, I don't know how, but I think first you start with baby steps and then they get bigger. But there is a huge change even in our political infrastructure. Now you can actually see a lot of young people coming in, and obviously young people coming in have seen the world, they have traveled around, they have been educated in western countries. So they know the difference in cultures, they know the difference�okay, they know that India is ten steps behind right now, we need to take them.

A lot of people from the old way of thinking, they have their old set ways. They believe anything western is wrong. And I don't think that. I think we can learn a lot from the western practicalities. The way they think is amazing. But we should still retain our family values, our concept of family because I think, that is our strong point.

So you think the younger people are more acceptable of or more prone to believing that the West is a good influence?

Well, definitely they would believe that the West is a good influence because they have travelled there, they have been there. They know that a guy who is not very rich, but he still pays his taxes, makes x amount of money, gets benefits from the government. They have a social security system to bank upon. While in India, I mean, you could just die on the street and people would come and pick you up, but that's it. It's a really very big problem, you just can't talk about it but I am sure things are changing you know. I hope.