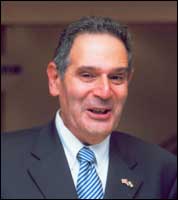 Dr Irwin Itzkovitch, assistant deputy minister of natural resources Canada [Images] (NRCan) was in Chennai last month as the head a delegation of senior representatives of NRCan, academia and Canadian companies from the geosciences and engineering sectors.

The group participated in a symposium on disaster management and mitigation technologies organised in the background of the tsunami that struck the Tamil Nadu coast in December last year.

As Canada is well known for its geological and geospace expertise, Dr Itzkovitch said his country was willing to work in partnership with any country in need of the expertise so that the impact of natural disasters could be minimised.

"The Canadian government believes that the best aid is to impart knowledge and teach people on disasters," he told Special Contributing Correspondent Shobha Warrier.

What were the reasons behind having a disaster management sector under your ministry? Was it because your country had been affected by natural disasters quite often?

Definitely. In the last 100 years, Canada has been affected tremendously by natural disasters. That is why we have disaster management within the earth sciences sector. It is the responsibility of the Canadian government to look after and monitor and mitigate landslides and volcanoes. That is the mandate of the sector.

In addition, my department looks after forest fires. Like India, we are on an earthquake zone. We have an earthquake almost every third day, if not every second day.

Another responsibility of my department is to give inputs to minimise loss of lives from natural disasters.

How do you prepare yourself and your people for various natural disasters?

Like in India, the first responders are at the community level and the prevention level. But the federal government has created an agency called Public Security and Emergency Preparedness, Canada, reporting directly to the deputy prime minister. The department which is equivalent to the US's Homeland Security has 52,000 employees and a budget of $ 4.9 billion.

The agency responds to disasters at the request of provinces. This agency has an overall coordination role.

You said involving the community is the most important thing in managing a natural disaster. In what way do are they involved?

There is no question in anybody's mind that people who get affected are at the community level. So, one has to sensitise the community and the citizens in each community, or each village in the case of India, to the potential for a disaster and what to do with respect to the situation. We do it through education; educating politicians at the ministerial level and people directly at the community level.

So, training, education and sensitisation have a lot to do in the event of a disaster.

We also have an earthquake monitoring system that we run for Canada. We have a direct line, and people report in immediately. So, our first line of defence is when people inform us when they feel a shake. They know they should report if they feel something. This is the only way we can protect human lives from the impact of natural disasters.

So, we try to minimise the social impact of deaths, injuries, etc by educating and training people at the community level. To minimise the economic impact by understanding the cause and effects.

For example, in Canada buildings are built to withstand damage from known natural disasters. You cannot build a building in Canada if it's not compliant with the code. The inspectors ensure that building codes are maintained.

I am very impressed with the way Japan [Images] manages natural disasters. In Japan, imparting of knowledge is done from the prime minister down. Every few months, they have an earthquake and a tsunami drill, like we have a fire drill, and the drill is led by the prime minister and his cabinet.

So, the community knows when there is a disaster, they have to go away from the disaster as opposed to run and look at it.

You said in your speech that it is the developing world that loses more lives and money than the developed world...

Part and parcel (of disaster management) is imparting knowledge. Part and parcel is building codes. The buildings are not necessarily built to the same standards. That's because there needs to be an enforcement methodology.

Is it also not because there are more people living in the developing world that the losses are more?

Definitely. I am from a country of 33 million people. And Chennai has a population of six-and-half million. To put it in perspective for Canada, the city of Chennai is bigger than every single Canadian province with the exception of three.

You talked about the transfer of knowledge and technology at the community level. Why were so many lives lost and so many buildings affected when Hurricane Katrina lashed the coast of one of the most developed countries?

Well, in the case of Hurricane Katrina it was again mainly destruction of property. That can be replaced; human lives cannot. Human lives were lost in Katrina because people for whatever reasons didn't want to leave.

That's the question. How do you educate 100 per cent of the population? When you live in a democratic country like India, can you force people to leave? We in India, the US and Canada have the same issue; we believe in democracy, we believe in informing people of what needs to be done. At the end of the day, people have the right to be wrong.