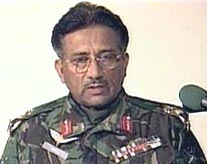 Pakistan President Pervez Musharraf [Images] believes that extremists helping the earthquake victims in Pakistan occupied Kashmir should not be stopped, and that aid from any source, including Israel, is welcome. He spoke to CNN.

The difference between India and Pakistan

CNN: Well now back to Pakistan where the death toll from an earthquake almost two weeks ago continues to climb dramatically. The UN says hundreds of millions of dollars in aid are still needed to help the survivors.

Pervez Musharraf: I don't feel 100 percent confident when I say that the casualty figures have risen to 48,000. I presume there will be more, because we haven't cleared the rubble. We haven't -- the people living in those mountains.

From the helicopter, one sees that there are many houses which have collapsed. Now where are those people, because we know are dead, and then there are people who are missing? I would say certainly it's more than 50,000.

The rescue phase effectively is over at this point. And you have delineated a grand vision for the reconstruction of the area and the rehabilitation of its people. But good intentions, as history dictates, are not enough, effectively.

In many areas, including this one. How do you ensure that the millions of dollars that's being pumped in from the international community and from Pakistan isn't siphoned off and reaches the people that needs it most?

I think I totally agree with you, the important thing is intentions are not enough, certainly. But I am a strong believer in two more things. Number one, a strategy. First thing to be done is to work out a strategy of how to address the issue. And then put up and man the organisation. An effective, well thought out organization to meet that -- to execute the strategy.

Having done that, then comes the morality and the tactics of implementing. And now having said that, we have done all that through the establishment of the earthquake reconstruction and rehabilitation authority, which I am chairing. I will chair it. I will spearhead it.

'The govt is playing the role of parent'

On the issue of assistance and relief, there are accounts that some of the Islamic relief agencies have had their resources effectively stopped, according to rules, post 9/11 terror rules, and money laundering rules. Is that true? Can you tell us anything about that?

No, there are many extremist organizations who we have banned and there are some who are on the watch list. And now I know that there are some who are active on the Kashmir side. I know in the Jalim Valley some are active. But I have checked up that those who are active are not the ones who are banned. Firstly, that should be understood. They are on watch, therefore.  But, however, I would say at this time everyone is motivated to do something for the people. I am not going to deny anyone who is doing something for the people to stop them from doing that.

But how concerned are you about the potential for active militancy and recruitment in areas where perhaps militants have got in earlier than the authorities to help out?

Are you effectively moving troops off those borders? Are you -- where they are on critical missions, effectively? Have you moved significant numbers of those troops into the effected area?

Are you going to tell me how many troops you have?

We have a really big army. We've got about 520,000 people. We have abundant troops to be moved, more if required.

And given the sensitivity of the area and the fact that you are a nuclear state, are your nuclear weapons secure at this point?

In the spirit of the ongoing peace process with India, you've accepted aid from India and allowed Kashmiris on both sides of the line of control to travel between family members. Does this or could this ultimately lead to a solution to the Kashmir problem?

Maybe, yes. We go towards -- move towards some kind of a � if the people come in contact, let people generate some kind of a solution for themselves.

Human trafficking in the quake's aftermath

You've also accepted aid from Israel. Ultimately you had initiated relations with the Israelis through your speech to the US Jewish Congress just a month or so ago, and you shook hands with Ariel Sharon at the UN. What are your motivations for your relationship with Israel?

Actually, Ariel Sharon shook hands with me. OK. Or we both shook hands together. OK. On -- yes, I did say that if the Jewish Congress wants to donate funds for our reconstruction, we'll accept it. If Israel wants to help us financially, we'll accept it. I think this is such a thing that my priority goes to the people of Pakistan, those people who have suffered.

End of a honeymoon?

The reconstruction effort is monumental. The main issue there is of fund collection, money, financing, and it can come from any source, we'll be grateful. If it comes from the Jewish community, we'll be grateful. So I have no hesitation. And I'm very glad that the people of Pakistan, nobody spoke against it, really.

Complete coverage: The quake and after

Reprinted with permission from CNN