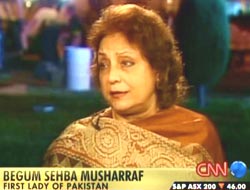 The October 8 earthquake not only killed thousands of people, many of them children, it also destroyed the educational facilities in Pakistan occupied Kashmir.

In an exclusive interview to CNN, the first lady of Pakistan, Begum Sehba Musharraf discussed the relief efforts being undertaken by the Pakistani government for the children affected by the recent earthquake. Begum Musharraf spoke using a translator.

Becky Anderson, CNN: I am now joined by the wife of Pakistan's president, Sehba Musharraf, a mother herself, a grandmother herself and a former teacher. We thank you very much indeed for joining us today.

Sehba Musharraf: Thank you very much.

Just give us some sense of the effect this earthquake has had on Pakistan and indeed these people.

As a mother, I honestly feel that whenever I visualise the agony and the suffering of those children who saw the roofs caving in on them when they were in the schools -- they're far away from their parents -- and the torment of the mothers, it really -- my heart really tears open at the very thought of what they must have gone through. And as a Pakistani, I wish this tragedy had never ever been visited upon us. It's really too heartbreaking.

So many of those affected are children. The organisation of the relief effort has been huge. There has been criticism of that -- there was an awful lot of criticism about the organization of the whole effort at the beginning. How do you respond to that at this stage?

Well, you realise that this has been in a somewhat inaccessible area to begin with -- it's at the foothills of the Himalayas that the earthquake basically hit. And we of course were on the further side of it. So reaching there by any other transport other than the road -- there was no other means. There was no rail, no airplanes flying in. Mostly helicopters could only operate. And initially the reports that came in took a while also in getting to us.

Human trafficking in the quake's aftermath

You're a mother, with two kids of your own -- they're grown up now, of course. You are a grandmother as well. Just how does Pakistan go about prioritising the needs of its children, and indeed the children of the region going forward?

The government of Pakistan is trying to play the role of a substitute parent right now, because whosoever has been located and has been brought to some sort of facility for first aid and for medical help, they are trying to look after them, identify them, get their data and coordinate it, or correlate it with somebody back home, so that they can locate the parents and then look after them, set up something for them for the future. And right now we are focusing on their medical help, on their counselling -- also to some extent, they've trained some counselors to look after their emotional needs as well. And in the future, they hope that we will be able to build up their schools and the hospitals, everything --

Let's talk about schools. In one region alone � just one region -- some 8,000 schools have been destroyed. Now in this part of the world, education is as important to your children as it is to those around the world. What's being done to effort the speedy reconstruction, the rebuild, and the effective rebuild of those schools?

We have strategised it. My husband -- the relief fund set up in the name of my husband is prioritising all this -- to build up the infrastructure, the roads, the hospitals, the schools, the telecommunication network -- as well as providing them some sort of a roof over their heads. Some speedy form of construction in which the people can go back to their usual settlements and families can come together again.

Reproduced with permission from CNN