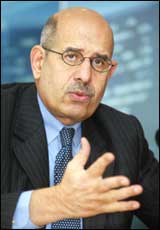 Dr Mohamed ElBaradei needs no introduction in any part of the world today. He has just won the Nobel Peace Prize not only for himself, but also for the International Atomic Energy Agency, which he has been heading for the last eight years. He has just been elected for a third term in recognition of his forthrightness, his impartiality, his honesty and his ability.

Thank you very much for agreeing to speak to us today. First of all let me congratulate you on the award of the Nobel Peace Prize.

Thank you very much, Sreeni, for your kind words.

Well, we were expecting you to get the Nobel even last year, since you were nominated last year also. Now that you have been awarded the Peace Prize, what is your reaction?

Well, it is a great sense of satisfaction, Sreeni. I think in many ways I feel that our effort for the last years to put some rationality to the irrational arms race, the nuclear arms race, has been vindicated. I think the fact is that we needed the visibility, the credibility for us to continue to face the many challenges.

You have plenty of those challenges.

Yes absolutely. Ranging from DPRK, the Korean issue, to the Iran issue� We have plenty of them. And I think it also recognizes the importance of multilateralism; the recognition, I think, a message, that all these issues can be resolved only through the multilateral approach. What we need is the broadest international co-operation and so my colleagues and I are quite elated and absolutely moved. But we also believe there is a great responsibility on our shoulders; there is high expectation.

Yes. I recall you stated that the Nobel Prize [Images] will inspire you to do even more work with devotion.

That is correct. People do not realize that we live in an imperfect world. The human and financial support we have is less than perfect for us to fulfill our mandate. The international community is not always united on these matters. With all these handicaps, I think, to be recognized not only for our achievements, but also for our efforts, gives our colleagues and me a good deal of satisfaction. You have been a part of it yourself.

Thank you. It has been my privilege to be associated with the IAEA. Well, there has been a lot of writing on the Nobel Prize in India and abroad.

Yes. I have seen that.

I have myself written on it for the Indian newspapers. One of the points that struck me was that the Nobel Prize had brought not only you and the IAEA to the centre stage, but also the atom itself. As you know, there have been doubts about the safety of nuclear power and its peaceful uses. Finally, the focus is on the whole issue of the place of nuclear energy. I know that you have proposals to promote nuclear energy for peaceful purposes. Do you agree with that assessment?

I think so. For the first time now, the importance of utilizing nuclear energy for peaceful purposes is also part of the recognition by the Nobel Committee, which is a sea change, I should say. From the time of Chernobyl, as you know, there was grave concern about the safety of nuclear activity for peaceful purposes. I think we have come a long way since. The Committee has recognised that for us to reap the benefits of nuclear energy, we have to keep our eye on the ball, to make sure that every nuclear activity is maintained at a high level of safety. This is an opportunity, but also a challenge at the same time.

'Energy is our most crucial need'

And the technical cooperation, I think, is an important part of your activities.

Absolutely. Technical cooperation, to me, is at the centre stage of what we do. I have seen some of your writings on that. You are absolutely correct. This is why our Agency is a player in providing x-ray machines to developing countries, providing the tools to have clean water and in increasing agricultural productivity. Our development role, to me, is the most satisfying role. We are not just policemen; we are also a development agency.

Indeed, the balance in the Agency that you support.

Your point was that you had not had the time to complete the inspection in Iraq.

Yes. Exactly. Again one of the first to call me to congratulate me was�..

Condoleezza Rice [Images], the US secretary of state.

Yes. We just have too many challenges ahead of us. We just cannot look backward. There was honest disagreement, but we need to look forward and not backward at all.

I am sure that the United States shares the joy over the fact that you and the Agency have been honoured.

Now let us turn to the recent Indian vote in the IAEA Board. I know that you will not want to comment on the Indian vote. But it has become a controversy in India. And there is an expectation that India may succeed in keeping the Iran issue within the IAEA, even tough we voted for the EU resolution. Much depends on what you are going to tell the Board in November. India will have to then take a position. There is tremendous domestic political pressure on the government not to appear to be voting against Iran. What are the prospects, you think, from your perspective, at this point in time?

I cannot, of course, comment on any country's vote. But, Sreeni, two things. One, the message that came from the Board is a clear message to Iran that the international community is getting impatient with the level and degree of (Iran's) cooperation with the Agency�.

Revealed: What Iran did for India and why it is hurt

And the lack of clarity?

Yes, the lack of clarity and the need to accelerate the cooperation. And, I think, on that everybody agreed. And everybody also agreed, those who abstained, voted against or in favour, that nobody wants to see Iran developing a nuclear weapon. So there is a full understanding on the broad picture. The question is, there is some disagreement on the tactics as to whether to refer the matter to the Security Council or to keep it within the confines of the Agency.

I think and I very much hope that we will not, the Board will not, refer the matter to the Security Council. I think I see some progress coming. The team that came back from Teheran over the weekend has indicated that they are moving on some of the outstanding issues.

I think there is a lot of effort by many countries, Russia [Images], China and probably yourself, to try to get back Iranians and the Europeans to the negotiating table, which, ultimately is the only way to resolve the issue. Whether we go to the Security Council and back or not, the end result is that on security issues the parties can only finally sit on the negotiating table, put their grievances on the table and find a solution that is acceptable to all.

So I am hoping that we can avoid escalating the situation in November, but that very much depends on Iran's co-operation. So the ball is in Iran's court. I hope that they will extend all co-operation in the interest of the international community, but primarily in Iran's own interest.

We in India wish you the very best to resolve this issue. For the first time, perhaps, Vienna and the IAEA are very much in focus in public opinion in India and we have a stake in your success.

Well, Mohamed let me ask you a final question. I know you are a keen golfer. I remember the many rounds of golf we played together in Vienna. How has the Nobel Prize impacted on your golf game?

Well, Sreeni, it is only a negative impact as I don't have much time to play golf anymore. But since I have lost my best golf companion, that is yourself, I shall wait till you come back and then we can have time to go together to the golf course.

Fumbling away our advantages

Thank you very much, Mohamed. It was very kind of you to talk to us today. Perhaps, this is the first time that you are talking to the Indian media after you won the Nobel Prize.

That is correct. Thank you, Sreeni. And give my best regards to everybody in India.

T P Sreenivasan, who has served as Indian ambassador to the United Nations and governor for India at the International Atomic Energy Agency, Vienna, spoke to Dr Mohamed ElBaradei on the phone days after he won the Nobel Peace Prize for 2005. This interview was first aired by Asianet, Thiruvananthapuram.