Her many studies include a research on Gandhi during the Salt Satyagraha and a study on the situation of children in State care in Gujarat.

Along with thinker Achyut Yagnik, she has co-authored The Shaping of Modern Gujarat: Plurality, Hindutva and Beyond (Penguin India) which aims as debunking many myths about Gujarat.

In an exclusive e-mailed interview to Managing Editor (National Affairs) Sheela Bhatt, Sheth says the book is a social and cultural history of Gujarat spanning the nineteenth and twentieth centuries. It explores the development of the mercantile ethos in the region, the 'encounter' with Islam, the coming of the British, the freedom struggle and Gandhi and development patterns after Independence. The book also tries to explore the conditions which led to the growth and development of powerful Hindu nationalism in Gujarat in the late twentieth century.

Can you please highlight the fundamental factors that shaped modern Gujarat? 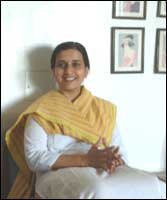 Many factors have shaped modern Gujarat. The long interaction -- over millennia -- with groups from Central Asia, West Asia and East Africa -- their diverse cultures have been absorbed into Gujarati society.

The conflicts generated by these interactions have also played their own part in shaping society. The state's long coastline and strategic position in the South Asian subcontinent put the region at the intersection of the silk and spice routes and contributed to the mercantile ethos which persists to this day.

British rule introduced modern industry technology and transformed the education system and created a new generation which laid the foundation for the freedom movement. The alchemy between these developments propelled Gujarat onwards beyond Independence and led to the Gujarat we see today.

'Gujarat culture' is essentially known as a 'merchant culture'. Why is it so? Is it a factually correct image?

The mercantile ethos is powerful and pervasive and is not restricted only to the Baniya sections of Gujarati society. Many other social groups -- Brahmins, Rajputs, Patidars and other communities, including Parsis and Muslims -- have absorbed this spirit of entrepreneurship over the centuries leading to a mercantile culture.

The violence which took place in 2002 was both a continuation of communal riots which have occurred in this state since King Siddharaj Solanki's times in the twelfth century as well as a departure. Communal riots have always been complex phenomena where a combination of political, religious, social, economic aspects and issues of governance come together and explode in violence.

It was true in Siddharaj's time and it is true for 2002. Siddharaj put a determined end to the violence, identified and speedily punished the perpetrators. We are yet to see that happen in the recent incidents.

Could you explain the approach you adopted for the book? How have Achyutbhai and you divided the chapters and how does it help readers?

Our approach was essentially thematic and less chronological in the strict sense of the term. We tried to identify what we believed to be the overarching themes which have shaped the Gujarati people and which have decisively influenced the turn of events over the past 200 years and whose echoes can be perceived today. The idea was to help readers explore their present as well as provoke them into reflecting about it.

As we know most of Gujarat was unaffected by the 2002 riots. In that case how do you analyse the image of Gujarat as a communal state, a saffron state?

In 2002, there was definitely a geography of violence and a geography of peace. While north and central Gujarat was overwhelmed by violence, Kutch, Saurashtra and South Gujarat were relatively calm and incident free.

There was a political angle to this spatial distribution of violence as well as a cultural and economic one.

Kutch and Saurashtra still have a large number of communities which are knit closely across religions and have a shared 'pir' and 'bhakti' tradition. Where economic alliances between communities were strong, violence was averted.

Yet it is also true that communalisation of society is widespread, specially among the middle classes, and how this group addresses the diversity of Gujarati society will prove to be decisive in coming times.

Can you help us understand why we find Gujaratis so religious? Why do so many kathakars (preachers) flourish in the state? 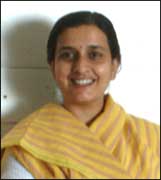 In the last few decades Hindu sects have flourished in Gujarat and among Gujaratis who live abroad. Rapid industrialisation and urbanisation as well as living in foreign lands, have weakened traditional bonds and identities.

Do you agree with the view that Gujarat is a successful laboratory of the Rashtriya Swayamsevak Sangh? Does it worry you when you think of the future of Gujarat?

It is true that the Sangh Parivar has enjoyed a great following in Gujarat in the past two decades. But chinks are visible in this seemingly ever-expanding success. Already, there are growing signs of dissidence and differences between various branches of the Sangh Parivar.

In some areas, this margin was even narrower. The future of Gujarat really depends on which political group converts this margin to its advantage. One must also remember that the call for the economic boycott of Muslims after the events of 2002 was unsuccessful.

How do you see the future of Gujarat as far as social harmony goes? Are you hopeful for Gujarat with Chief Minister Narendra Modi's [Images] presence so well-entrenched?

I think our earlier answer would go some way in answering this query. While a few individuals may appear to dominate events at a particular time, it is equally true that these individuals are facing internal challenges.

At the same time, deep religious and social divisions in society are also a reality. Hindu nationalism is experiencing an upsurge now and we believe that it is being powered by the economic and political ambitions of the middle class. It is likely that they would support the Sangh Parivar as long as these needs are met.

Lastly, could you share with us some lesser known but amazing aspects of modern Gujarat that you came across while writing this book?

One of the most amazing aspects of Gujarat is that even in the most turbulent times, incredible Gujaratis have raised their voice -- there was Ranchhodlal Chhotalal who established the first textile mill in the face of opposition and setbacks.

Dadabhai Naoroji who spoke up against British policies. Sayajirao Gaekwad, who introduced free and compulsory primary education for all in his kingdom of Baroda and, of course, Gandhi whose contribution was so vital.

There were fearless, visionary writers -- Dalpatram, Narmad. There were many women too -- Bhikhaji Cama, Vidyagauri Nilkanth, Anasuya Sarabhai, Kamlaben Patel. All these individuals, in there own ways, played a decisive part in questioning, influencing and shaping their times.

Just before we end our chat could you tell us some unfathomable facts or trends which you have written about but found perplexing about Gujarati society?

One of the most unfathomable aspects of Gujarati society is the utter lack of reflection about the horrific violence of 2002, the complete poverty of debate about what led to such gross acts within Gujarati society and what its implications are for the norms and values of future generations.

This absence is marked -- both in everyday conversations and in the local media. This phenomenon has happened despite the strong Jain influence and the Bhakti tradition in Gujarati society.

Buy The Shaping of Modern Gujarat: Plurality, Hindutva and Beyond at Rediff Shopping today!