Naxalites on Sunday night stormed Jehanabad district, 45 kilometres from Patna killing at least 12 people and triggering a fierce gun-battle with the police.

Durga Rajak, the sentry posted at the entrance of the jail, and Bade Sharma, a suspected activist of the Ranvir Sena, a private militia of upper caste land owners, were gunned down by CPI (Maoist) guerrillas who attacked the jail located in the heart of the town. 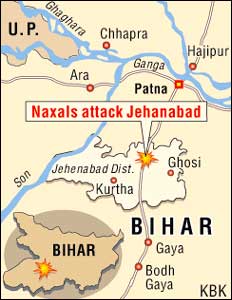 Warder Krishna Chandra Prasad, havildar Hareram Yadav and an employee of the jail Naresh Kumar, were injured in the attack.

The Naxalites were in police uniform.

The police lines were attacked around 2100 IST to prevent any reinforcement from reaching the prison authorities, the sources said.

The ultras launched simultaneous attacks on the jail and police lines located in the heart of the town, Superintendent of Police Sunil Kumar said.

The entire area reverberated with sounds of gunfire that continued for about two hours as police offered resistance at the gates of the jail and near the district collectorate.

Official sources said nearly half of the jail's over 650 inmates were missing and they were either believed to have been 'rescued' by the Naxalites or managed to flee.

Dreaded Ajay Kanu, state secretary of CPI (Maoist), was believed to be among the escapees. Kanu was arrested in 2003 and was recently shifted from Beur Central Jail in Patna.

He said Director-General of Police of Jharkhand has been requested to seal the state's borders.

All police stations, particularly those in Naxalite-hit districts, have been put on high alert, he added.

State's Director-General of Police A R Sinha said in Patna that he too had received information that several inmates had either been kidnapped or they had escaped.

The Naxalites also looted 16 rifles and a large quantity of ammunition from the jail campus, the sources said.

A few members of the public were also reported to have been injured in bomb explosions by the ultras but no immediate confirmation was available.

Pamphlets left by ultras at the jail said 'Operation Jailbreak' was deliberately coincided with the great November 13 Russian revolution to 'rescue our comrades and to award death sentence to select Ranvir Sena activists' lodged in the jail.

The Naxalites, who despite having called a boycott of Bihar assembly elections chose to lie low, are locked in an internecine conflict with the Ranvir Sena, a private militia of upper cast land owners in Jehanabad, Gaya and Bhojpur districts resulting in hundreds of deaths on both sides over the last few years.

State's Home Secretary H C Sirohi said attempt by the underground militants to loot the armoury in the police lines was foiled.

Contingents of special taskforce of Bihar Police and central paramilitary forces have been rushed to Jehanabad from Patna and Gaya districts but their advance is slow due to the apprehension that Naxalites might have 'heavily mined' the roads leading to the south Bihar town.