November 08, 2005
Shyam Saran, India's foreign secretary, spoke to rediff.com columnist Ambassador T P Sreenivasan on his speech at the Institute of Defence Studies and Analysis. The interview was aired by the Asianet television channel.

To throw further light on the foreign secretary's IDSA speech, we have none other than the foreign secretary himself on the line. Mr Shyam Saran is one of the most brilliant officers of the Indian Foreign Service. He stood first in the Civil Services examination in 1970 and served with distinction in many places. He was the Indian ambassador/high commissioner to Mauritius, Myanmar, Indonesia and Nepal before he became foreign secretary last year. More than anything else, he is a good friend I have learnt to admire over the years.

Shyam I just told our viewers about your speech at the IDSA. I thought that the point you made was that a country like India does not change its policies overnight.

There is a historic basis for what we do. But at the same time, you indicated some changes. Could you elaborate for us a little as to what these changes are, or what are the nuances?

Well, as I mentioned in the speech, India has now, thanks to its recent economic achievements, its scientific and technological achievements, has reached a level of engagement with the rest of the world, which is quite different in scale from what it was earlier. 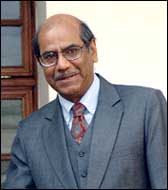 And our requirements are new.

...which necessitated some changes, or rather concessions?

Well, I would not call it concessions because what we are essentially trying to do is to persuade our partners that, given our very impeccable record in terms of handling sensitive technology, we should be looked upon as a partner country. We should not be looked upon as a target country.

Yes. But we used to speak more about disarmament, when you and I were together at the United Nations. Now we are not shy about speaking of non-proliferation. How has this change taken place?

Well, again, I think, I would rather draw your attention to the fact that I referred right in the beginning of my speech to the importance that we attach to nuclear disarmament.

In fact, I stated that we continue to believe that the best non-proliferation measure is really the total elimination of nuclear weapons altogether.

And we are ready to eliminate our own weapons.

Exactly. We are not for the perpetuation of the division between nuclear haves and nuclear have-nots. We are prepared to participate actively in the negotiations for a multilateral treaty, which would eliminate all nuclear weapons, just as we have done with another category of weapons of mass destruction, chemical weapons. That is clear enough.

So there should be no apprehension that somehow India, when it is talking about nuclear non-proliferation, is abandoning disarmament.

Well, as a result of the new agreement with the United States, we seem to have gained in terms of the kind of technology and equipment that we will get. But what has the United States gained from this agreement?

Well, the United States is today looking upon India as a country, which is developing very rapidly and, therefore, in terms of any cross cutting issues that they are looking at, whether it is the trading system, issues of environment, issues of health, for example, HIV/AIDS, even things like disaster management, India is seen today as an indispensable partner.

'Bush impressed with our experiments in democracy'

And they want India to be in the mainstream of things.Yes. I think so. The US is looking upon India -- particularly if you look at the entire arc of instability stretching from the Middle East, right down to the Far East -- here is a country which is a great factor of stability. I would not say this only for the United States. It makes sense for other important players in the world also to engage India as a partner.

In fact, that is what has happened. If you look at Europe, it today has a strategic partnership with India and it has followed that up with a very detailed Action Plan for co-operation between the two sides. So it is a reciprocal thing, which is happening.

OK, Shyam. You just mentioned Europe. And that reminded me of our vote in Vienna, where we supported the EU resolution. Of course the EU resolution says definitely that the Iran case should be referred to the Security Council. But that is not the end of the road, as Dr Mohamed ElBaradei told me in a similar programme. And with the new influence we have gained in the EU with this vote, as a supporter of their basic objective, would we be able to bring this matter back to the IAEA, even if the matter is referred to the Security Council? Is that your line of action?

Well, number one. What the previous vote did was to say that this was something which could be referred to the Security Council, but allowed time to see whether a reasonable compromise could be worked out.

It appears that some people have missed the point that a reference to the Security Council is not the end of the road.

No, it is not. But we have, even while voting for that resolution, if you look at our explanation of vote, it clearly set out the Indian position that we do not believe that this is a case which should go to the Security Council.

We have said we would prefer this is sorted out within the IAEA itself and we favour a diplomatic solution, a solution through dialogue.

And since the vote was taken, our effort has been to engage closely with the European three, we have spoken about this to the Russians, to the Chinese and we have had contacts with the Iranians themselves. So our effort is to use whatever influence we have and whatever we can do with our friendly relations with all the major actors to try and see whether this matter remains within the IAEA and it is amicably resolved.

I think that the analogy being used is that of Iraq. That is not the only analogy available. North Korea and Libya were also referred to the Security Council, not to start a war. That is a procedure that the IAEA Statute requires. It does not necessarily mean that the IAEA cannot continue the discussions. The reference does not mean war automatically.

Any confrontation which would arise in our neighbourhood is obviously not in India's interest.

Nor is it in our interest to have another nuclear weapon State in our neighbourhood.

Exactly. We have clearly stated that we do not support any horizontal proliferation, just as we do not support any vertical proliferation. But what needs to be appreciated is that, as you mentioned, there is certain continuity in our policy which needs adjustments in the exigencies of the international situation as it evolves. And I think the positions that we are taking are in the best interests of India.

Well, Shyam, thank you very much. Best of luck. I know you have a challenging time, but I have no doubt that you will emerge successful, as usual.