In her book, Going to School in India, Lisa Heydlauff steers away from the stereotypical rural government school -- a locked building lacking of books and with truant teachers -- and focuses on the positive movements in India.

Among her protagonists are 13-year-old Devki, who feeds cows and walks several kilometres to fetch water in the day and attends school at night, and Haider, whose friends arrive in time every day to push his wheelchair to school, a kilometre away.

Amid a riot of colors, Heydlauff, who was born in England [Images] and educated in the US and Canada [Images], celebrates school that could be a solitary tent in the middle of a cracked-mud desert, the shade of a mango tree, or a stationary bus.

Heydlauff, who has lived in New Delhi for seven years, was in New York recently to launch the book.

At two public schools in New York, she met wide-eyed fourth- and fifth-graders eager to tell her what they feel about Going to School. Heydlauff also made time to answer some questions from rediff India Abroad Special Correspondent Monika Joshi.

What were some of the interesting questions you were asked?

The children had a lot of observations about what was different and what's the same about going to school in America, in New York City, as opposed to India. 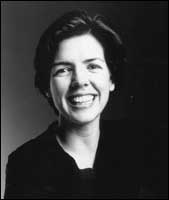 There was a little boy from Bangladesh who said he's never been to India, but he thinks India must be very much like Bangladesh. And that in Bangladesh there are 10,000 rickshaws. I said, 'Great.' But what kind of rickshaws are they? Tell us all about it. It was really sweet for him to be able to say something he could relate to. He was speaking in front of 300 of his classmates, so he kind of became a hero.

There was another girl who had been born in Mumbai. She got up and talked a lot about Ganesh.

Did you read from the book?

I told the children about the different stories in the book because they had read them � like the story behind Haider. Haider is the boy who gets to school in his wheelchair in West Bengal. When we went there, we made a film about him. He had said he'd like a red wheelchair with a horn and comfortable seatbacks. We then went back to the network in Mumbai and told them the story, not thinking anything. And they decided to buy him the red wheelchair.

They got it on eBay, and got it delivered to him in Calcutta. He did not know they were coming. Apparently, the week before, his wheelchair had broken.

I was telling them stories like that � where the stories in the book have gone now, what are the children doing, and what the stories mean.

How did the children get to read the book?

They read it because of Charlesbridge, the publisher who does direct sales to schools. Each class had a copy of the book.

What took you to India?

An idea took me to India. When I was in university, I looked at a book called Women, the Press and Partition. I did not read the book but I thought India must be a place where words come alive. After university, I moved to London [Images] and taught for a year.

While I could teach my class of seven year olds about Mexico because I had been there, I could not teach them about India, and as I searched for books for us to explore together, at that time I only found the Lonely Planet.

One day, Oliver, a little boy in my class asked, 'What is it like to go to school in India?' And I told him that if I ever went to India, I would let him know.

What was your goal in writing Going to School?

My goal was to show that there are wonderful, positive movements happening in India.

I had lived in India for several years before I really thought about beginning Going to School. I realised there was lots of media (coverage) about what did not work. But what about (that which) did work? I believe inspiration can change the world. And, as I traveled more, I felt positive stories about education could be told in a celebratory, transcendent way that showed that school could be fun, relevant to children's lives. And that communities, organisations, governments and individuals could change the way children go to school, if they believe in possibilities -- if they try.

How long did the book take?

It took nine months to travel and additionally another two years to publish the book.

How many schools did you visit?

I think we must have visited over 1,000 schools.

How were specific schools chosen?

Schools were chosen by visiting to see if we could indeed tell a story.

Could the story be told in a photograph? Are there activities that take place outside of the classroom that are relevant to children's lives in that place?

Are the children animated, excited, inspired? Does the story tell itself?

At that time we found stories with a lot of help from our friends who gave us good directions, from local NGOs and NGO networks to word-of-mouth, from UNICEF to friends who had traveled a great deal.

You present an upbeat, vibrant picture of school. How realistic is it?

I think we've never tended to be representative.

What has happened since the book was launched?

The book is sold out in India, and mini-books have been made in West Bengal, and are going to be made in Karnataka and Orissa.

In each state, about half-a-million books are going to be printed, which will reach 5 million children in each state.

We have made eight mini-films, eight to 10 minutes long, each celebrating a day in school in India. They are being supported by POGO, the second-highest viewed children's channel in India.

What feedback did you receive in India?

We're in the middle of a very large project, called Girl Stars, which is supported by UNICEF. It's creating icons of everyday women and girls who have, by going to school, changed their lives and their communities' lives.

Every story will have a book, a poster and a movie and a song.

We're doing it in the Hindi belt of Uttar Pradesh, Bihar, Rajasthan, Jharkhand and Madhya Pradesh. It will be launched middle of next year.

Who are these Girl Stars?

A young girl who is a priest in Rajasthan (and it's a big thing because she wears trousers).

Another girl, a Muslim in Bihar, comes to government school, and she has just taken a loan for her own egg shop.

Our thing with Girl Stars is basically what one million girls do, not one in a million. Not as one girl in isolation as an independent, strong woman, but as part of a larger community where everyone has to work together to help things change.

Who are your partners in Going to School?

To begin the project, it was the Bharti Foundation. Now, in America, it's the Global Fund for Children as well as Charlesbridge. Global Fund also supports our mini books in Hindi back in India. We are supported by Indian Airlines, by POGO, and now for Girl Stars, by UNICEF.

We're trying to find ways for the movies to go to different places. Maybe Children's BBC in London is the way. We're working on sending them to America. We are doing Girl Stars, and if that works, in five more states, then stage 2 in five other states and five more states in stage 3. We are also starting 'Be an Entrepreneur,' which is to tell 50 entrepreneurial stories to children -- stories that just might change the world.

Finding entrepreneurial innovations and inventions going on in India. The idea is what 1 million children can do, not one in a million. It's something like waste management, and pollution. How do you make money and change the world?

What stories will you tell?

There is a young man in Madhya Pradesh, who has been cleaning up his village, and inspired other people to help him do that. He has now somehow got the municipality, or the local government to pay him for his services. We are making things like that into allegorical, iconic tales. There is this woman who has been making chilies for exports. Someone else has developed a smokeless chullah.

Did you find it difficult adjusting in India � infrastructure problems and everyday struggles?

There are infrastructure challenges, but there are incredible personal relationships to make up for those things. You have a relationship with everybody. Our printer comes and smiles and has tea, and always delivers a few days late. But we know that, so we ask him to do it two days earlier than we need it. You just learn what you need to do.

Are you planning to stay on?

I think so. I've been there for seven years. My work is in India.

As long as we are able to work and make great media for kids, I would love to be there.

What would you have done had you not gone to India?

I'd be probably be looking for a way to come to India (laughs). I had grown up in different places around the world, and I just wanted something else. I didn't have the words to describe what that was. But I think in some way, I found that.