Sukanya Verma looks at the baap-beti equations depicted on the screen. 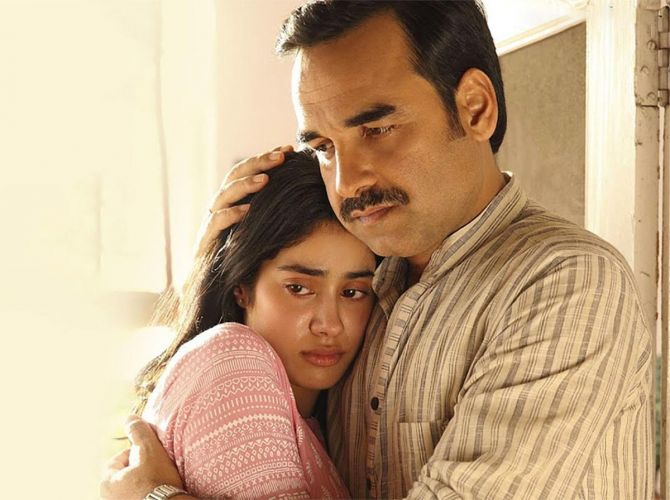 He is her hero.

She is his baby.

The bond between dads and daughters is strong and special.

In anticipation of the film to drop on Netflix on August 12, Sukanya Verma looks at the baap-beti equations depicted on the screen so far.

A far cry from Kahani's coldblooded Bob Biswas, Saswata Chatterjee cuts quite a picture of paternal love towards his ailing teenage daughter Sanjana Sanghi, teaching her a move or two, in the official remake of A Fault in Our Stars. 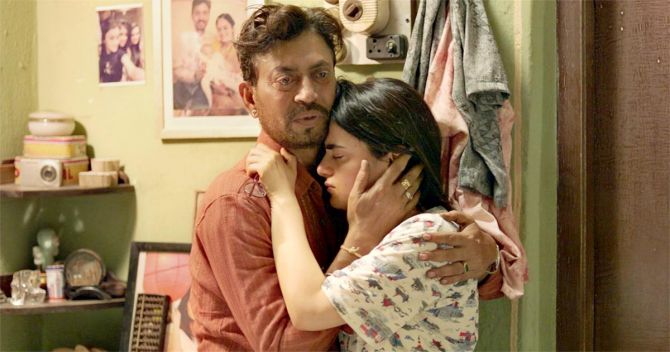 Irrfan's ability to immerse himself into any emotion is the reason to watch his doting dad going to crazy lengths to secure an admission for his daughter, played by the lovely Radhika Madan, in a London school.

The trauma of going bald as a schoolgirl and the helplessness of a middle-class father over it is poignantly expressed in the combined sensitivity displayed by an excellent Vipin Sharma and Shweta Tripathi. 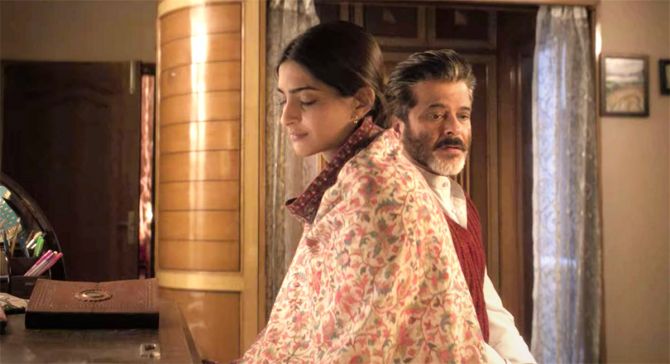 Connections are formed and growing up looks inevitable in the belated coming-of-age of Jawaani Jaaneman. 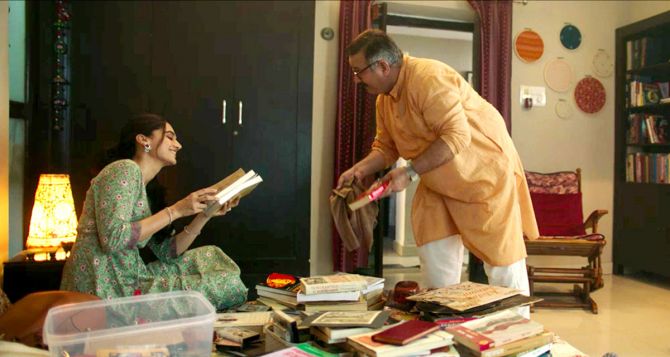 The best dads will stand by you through thick and thin and empower you against patriarchy. It is as Taapsee finds out during her lowest phase in Kumud Mishra's sympathetic and sensible father and his matter-of-fact counsel. 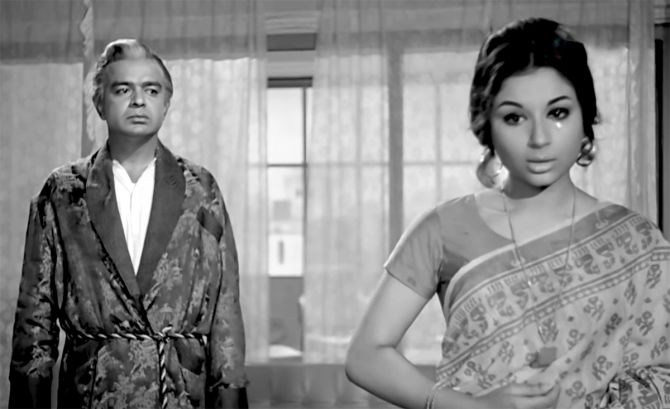 In Hrishikesh Mukherjee's sensitive drama, a father (Tarun Bose) resents his daughter (Sharmila Tagore) after losing his wife during childbirth.

His cold treatment fuels her guilt until she comes of age and finds courage in an enlightened young man's (Dharmendra) philosophy and poetry. 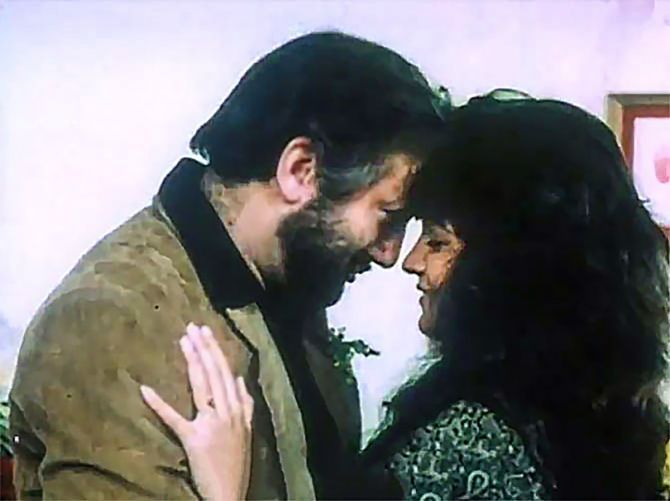 Inspired by director Mahesh Bhatt's own battle with alcoholism, Daddy tells the story of a teenage girl's (Pooja Bhatt) dedicated efforts to get her drunkard father, a faded ghazal singer (Anupam Kher), rid of his addiction. 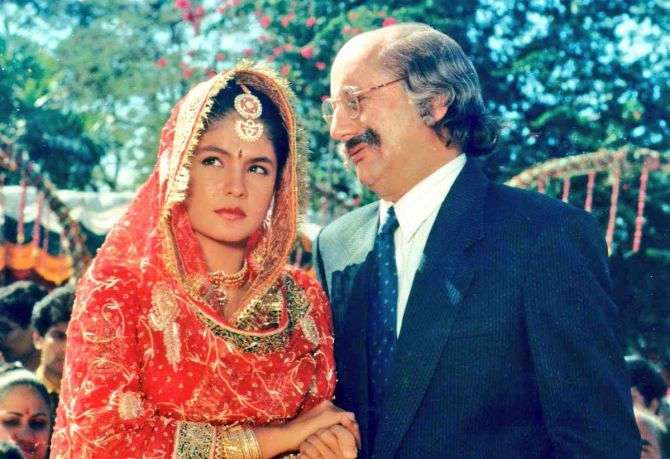 Anupam Kher and Pooja Bhatt's endearing chemistry is at work again as they slip in the role of indulgent papa and pampered princess who row and reconcile over the latter's love interests.

Amitabh Bachchan's constipation woes and brash candour, Deepika Padukone's harried expressions and extraordinary patience define the bittersweet nature of their father-daughter bond and the journey they embark on in Piku. 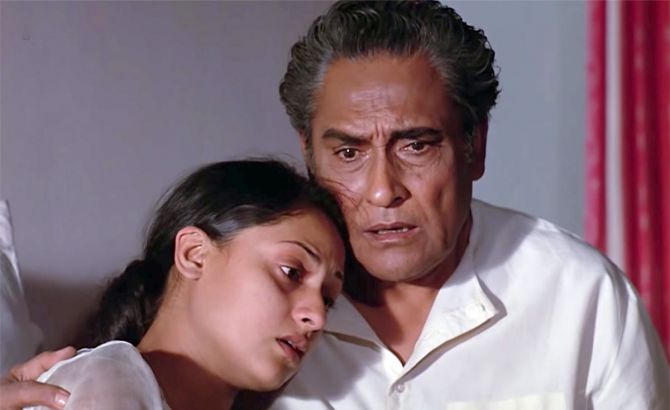 A loving father is forced to keep a smiling face for the sake of his dying daughter in the heartrending Mili. It's not easy, but he tries.

Two of Hindi cinema's most natural acts, Ashok Kumar and Jaya Bachchan, paint the screen in all shades of sentiment as they experience life at its liveliest and most lethal. 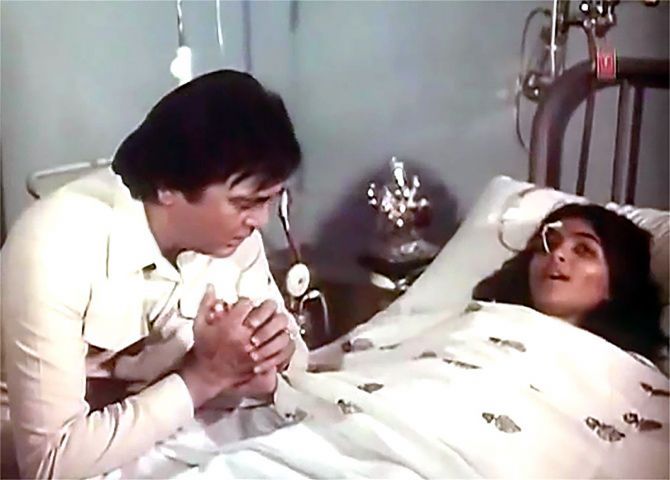 The irony of being in the profession of saving lives and feeling helpless when your daughter is diagnosed of a deadly disease is played out to tear-jerking effect in Sunil Dutt and Khushboo's Dard Ka Rishta. 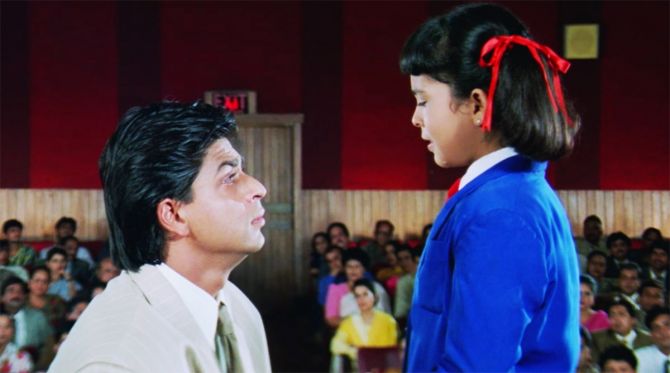 Being a single parent can be daunting unless you're a dapper, doting Papa like Kuch Kuch Hota Hai's Shah Rukh Khan to the precocious Sana Saeed.

He will do anything to please the apple of his eye.

From landing at a summer camp at the sound of her sneeze to break up his best friend's wedding because she'd like a new mommy. 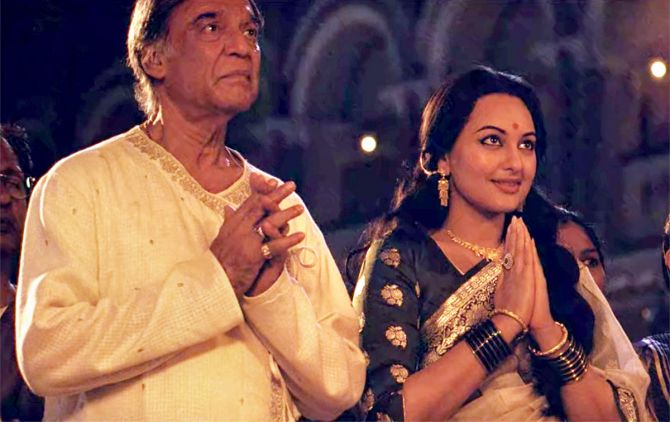 When Sonakshi Sinha's asthma acts up, a warm Barun Chanda tells her the story of a king whose immortality is locked inside a parrot. If the bird dies, so does he.

Bottom-line, she's his life. If she hurts, so will he. And that's exactly what happens few reels later. 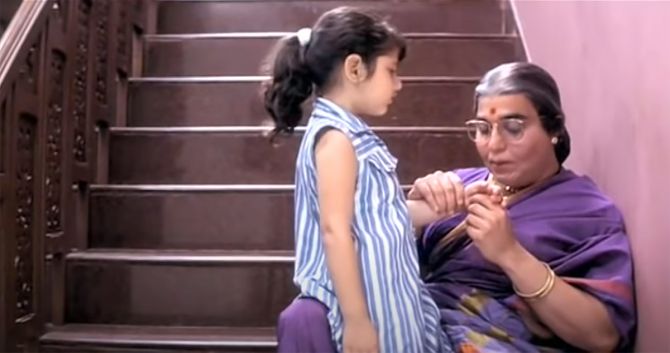 Kamal Haasan takes a leaf out of Mrs Doubtfire's book and masquerades as a middle-aged nanny at his ex-wife's to be close to their daughter -- that's baby Fatima Sana Shaikh in the eternally droll Chachi 420.

The little moppet straightaway recognises daddy under all that prosthetic but happily plays along. 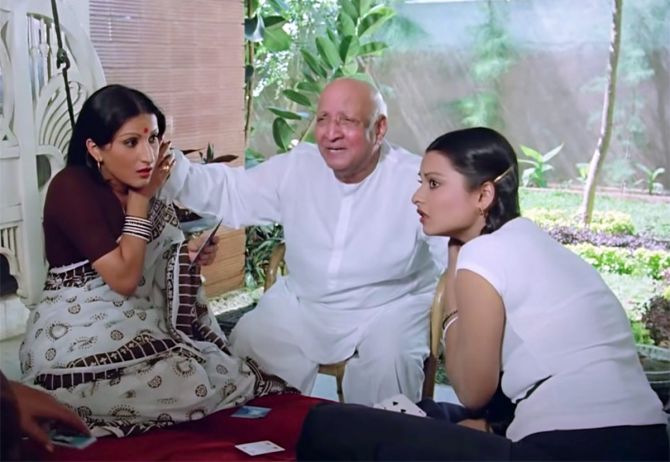 One glimpse of David and his vivacious betis, Rekha and Aradhana, in their living room playing cards or exchanging kaafiyas is enough to tell us about their adorable camaraderie and deep affection. Nirmal Anand, you bet! 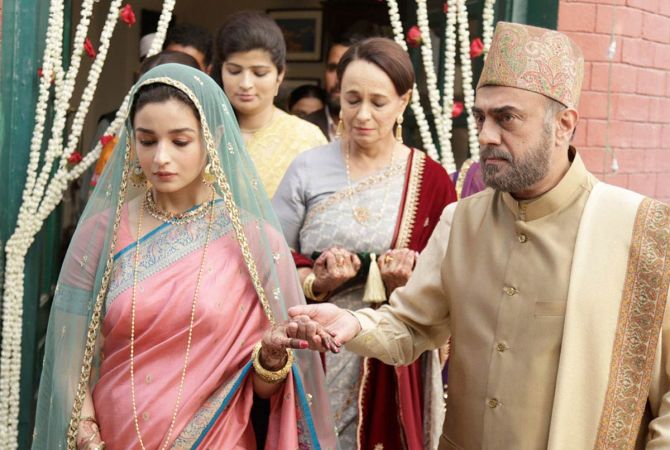 And so when a man learns he's dying, he passes on his spying legacy to his college-going daughter through a political marriage across the border. She quietly embraces this 'watan ke aage kuch nahi' ideology, no questions asked. As the concerned albeit overprotective daddy of a successful career woman, played by Sonam Kapoor, Rishi Kapoor leaves no stone unturned to ensure her future husband measures up to her in every way in the tradition of typical rom-com dads. 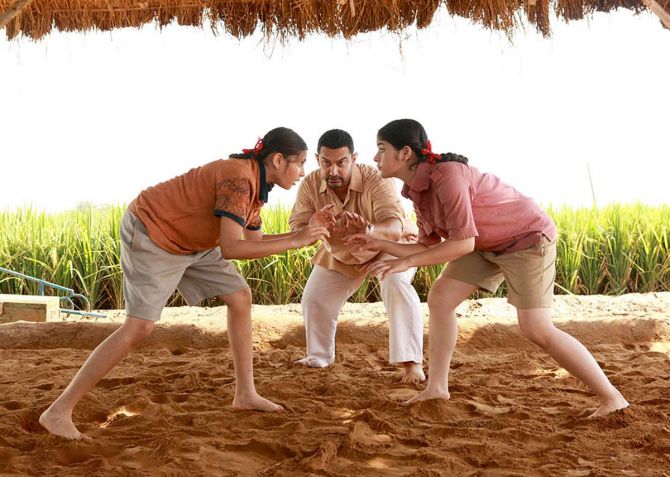 Aamir Khan's hanikarak bapu makes life hell for his daughters to achieve his dream of winning gold for India in wrestling.

From forcing them to give up junk food to making them slog hard in the ring, the demanding daddy of Fatima Sana Shaikh and Sanya Malhotra, inspired by the real-life Phogats, will stop at nothing. 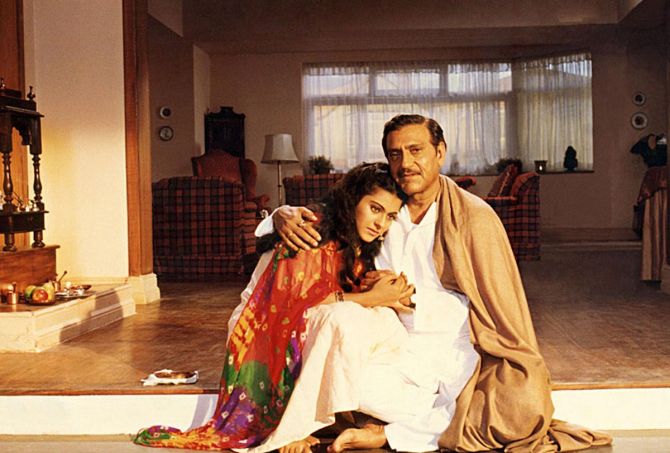 As the strict, conservative NRI father of two girls, Amrish Puri is a picture of shuddh desi authority and seriousness.

Under that hard, unrelenting exterior though is a caring father who agrees to let his daughter go on a Europe vacation and, eventually, to 'je le apni zindagi.'

All through the quirky Hasee Toh Phasee, Parineeti Chopra hopes to seek her disgruntled father's validation.

She has stolen from him and regrets it. He's had a heart attack because of it but misses her.

When they finally reunite after seven years, it's 'aww' in big, bold letters.

Nana Patekar and Manisha Koirala capture the repercussions of a father's handicap and bitterness on his gifted daughter as they threaten to pull her away from her one passion -- music. Except he cares more than he lets on. 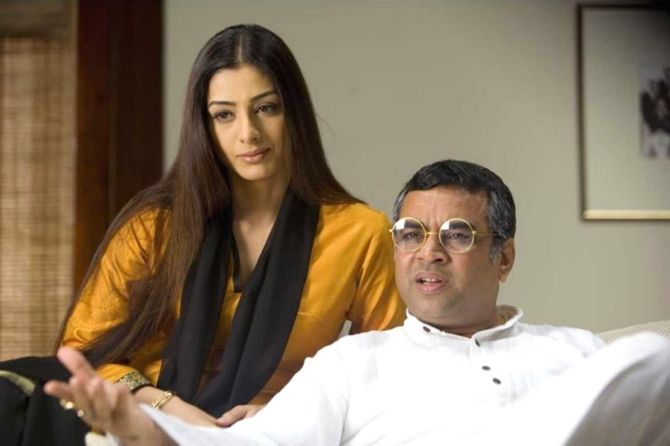 Few dads will be elated to learn their daughter is dating a man older than him. Paresh Rawal, too, is not exactly on cloud nine when Tabu brings Amitabh Bachchan home and does everything to rub in the budhapa. 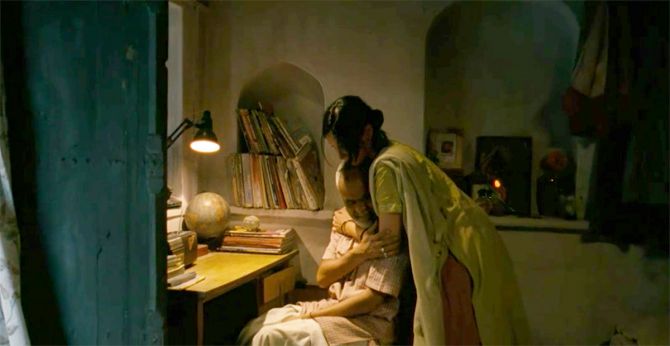 The quintessential daddy's girl, Maya Sarao finds both sympathy and support in Sanjay Mishra's heartfelt, dinner-feeding Bauji after her selection of husband is met with disapproval. She's equally receptive of her father's mood and his respective lows.

How far can a father go to protect his child even when they are in the wrong? Ask Gupt.

So Paresh Rawal not only conceals her medical condition but also takes the blame for his psychotic serial killer daughter Kajol's deeds because he loves her too much to see her behind bars.

From combing lice out of reel daughter Aditi Rao Hydari's hair to wrecking havoc on her assaulters, Sanjay Dutt takes his daddy duties with law-breaking urgency in the vendetta potboiler Bhoomi. 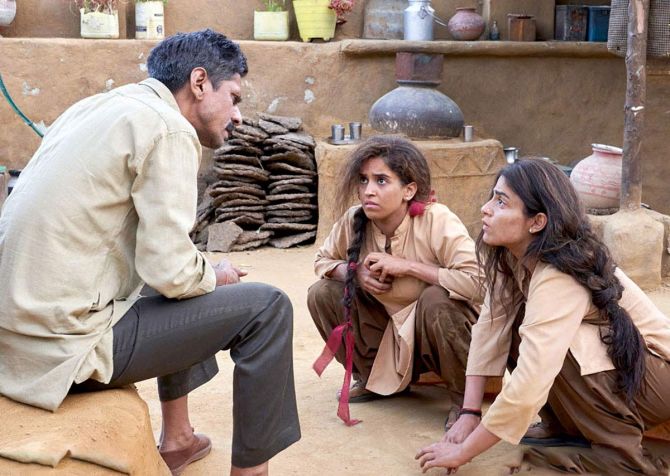 As the impoverished single father of two sparring daughters (Sanya Malhotra, Radhika Madan) in Vishal Bhardwaj's madcap movie, Vijay Raaz spends all his screen time making peace, marrying them off, realising the futility of his actions until the climatic masterstroke.

Killing two birds in one stone, it reconciles the sisters and realise their affection for their poor father. 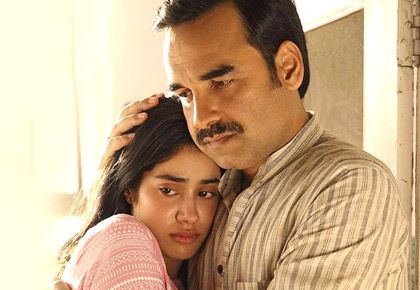 Lessons from Bollywood: What to wear in bed! 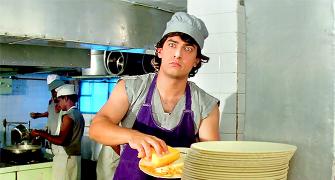 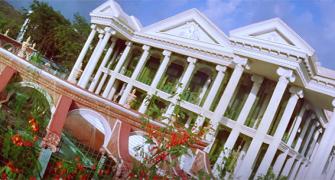 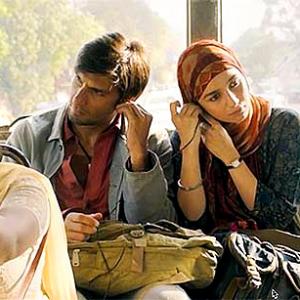 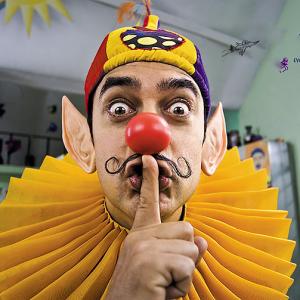