Aseem Chhabra brings you the Best of the 72nd Berlinale.

While the COVID-19 situation in Europe was uncertain, the organisers of Berlinale made the tough decision of physically holding the film festival, but with a lot of restrictions, including 50 percent theatre occupancy.

They also cut back on the press screenings by four days, making the festival a week-long affair.

Despite that, I had to make the difficult choice of skipping traveling to Berlin.

Instead, I watched quite a few Berlinale films online, a terrific crop of new cinema from around the world.

But the films I watched kept me engaged with the festival.

Many of these films will start to travel to other festivals and perhaps also stream online.

My list of the 10 best films I watched during the 72nd Berlinale, sitting at home in India. 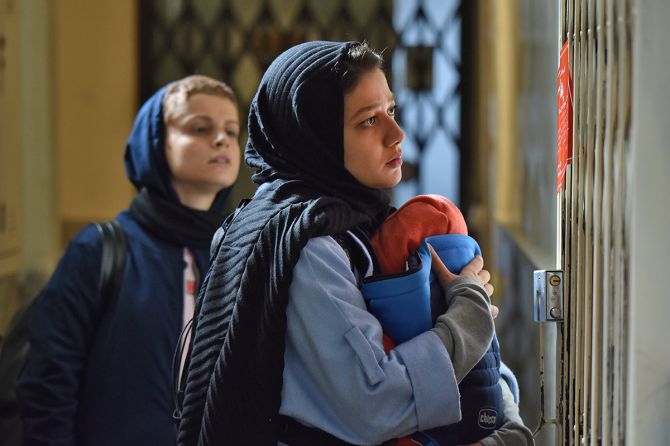 Until Tomorrow (or Ta Farda in Persian) examines how unforgiving and conservative Iranian society is, with no room to accommodate for errors that people make.

Fereshteh is a strong, independent Iranian woman. When she discovers she is pregnant, carrying her boyfriend's child, she decides not to abort the baby.

Instead, she chooses to raise the child on her own in Tehran, the city as it exists today.

Fereshteh has not told her parents about the baby, but one day, they announce they are arriving from another city and plan to spend a night with her.

Until Tomorrow shows us Fereshteh's desperation to find someone she can leave the child with for one night until her parents leave the next day.

The film is part of a recent trend in Iranian cinema, where the narrative places the protagonists in difficult situations; usually, the result of religious and social pressures.

Such films make us very uncomfortable since we wish we can help the characters and solve their problems, even as they become more and more complicated. 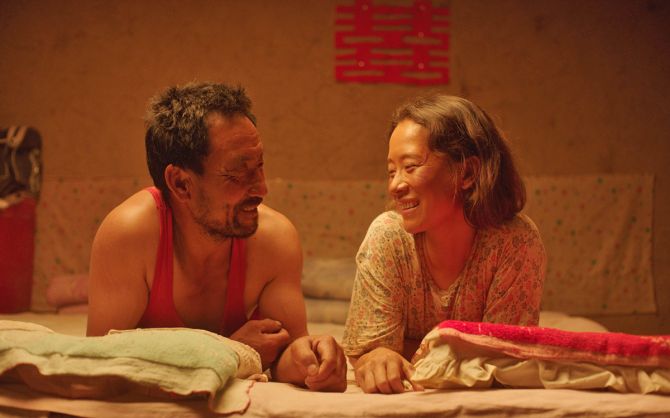 Youtie Ma and Guiying Cao are two middle-aged people, who have been cast aside by their families in rural China.

Guiying has had a difficult life since she was often beaten as a child, which led to her losing control of her bladder muscles.

One day, the families decide to arrange Ma and Cao's marriage.

The two meek people go along with the traditional arrangement, but as time passes, they start to care for each other and fall in love.

They work very hard, planting wheat, corn, potatoes, harvesting and taking the produce to the market.

They invest money in getting eggs that hatch into chicks, meanwhile also caring for their donkey and pigs.

But despite the daily struggles, one thing remains clear: The love of Ma and Cao, and the dignity with which they live. 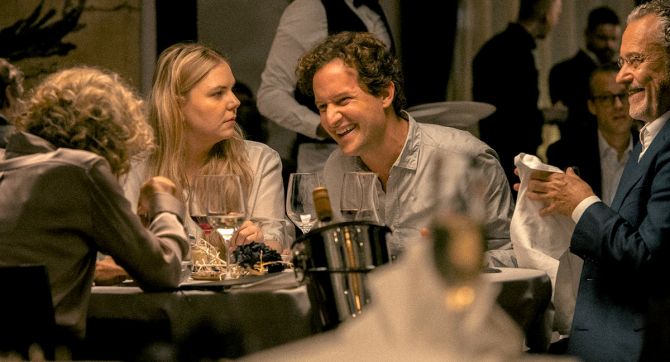 Julius is a tall, handsome man who works as a security guard in a museum. He has friends and seems happy and confident.

But underneath this normalcy, we get a sense that all is not okay with Julius and perhaps he is living in parallel universes.

Julius (played with a lot of finesse by Moritz von Treuenfels) has made a habit of concocting stories about his personal life, work and his past.

And he seems to sail through by winning the sympathy of people he meets.

Along the way, he borrows stories, personal details and occurrences from people he meets and makes them his own.

In Axiom, Director Jöns Jönsson creates a compelling portrait of a pathological liar, a man in crisis even as he manages to escape getting caught.

The film makes one feel very uncomfortable since it is a terrifying portrait of man with mental health problems.

He deceives the world in so many ways that he himself is not aware of what is true and what is fiction. 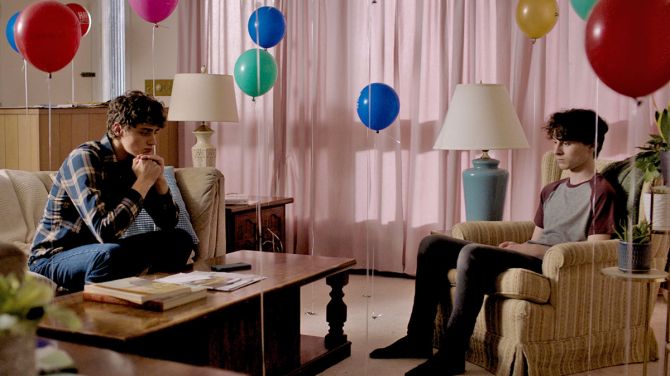 In Stay Awake, Director Jamie Sisley shares personal details about his childhood and teenage years when he and his brother had to cope with their mother's addiction to prescription drugs.

Set in a small town in Virginia, Stay Awake is the story of two brothers Derek (19) and Ethan (17), who are trying to stay afloat, barely coping with their own struggles -- girlfriend problems, sexuality issues, applying for colleges, acting career -- while constantly being pulled down by their mother's debilitating prescription drug abuse.

Unlike other films about addiction that examine the narrative from the point of view of the victims of drug abuse, Stay Awake focuses on the caretakers -- the two young sons, whose lives are turned upside down as they have to be constantly watching over their mother, often taking her to the hospital.

Stay Awake is a beautifully made film.

We relate with the characters, wish the best for them, especially as things often go out of control.

No wonder Stay Awake received a special mention from the Generations+ jury at Berlinale. It was the only American film to receive an award at this year's festival.

No U Turn (Nigeria) 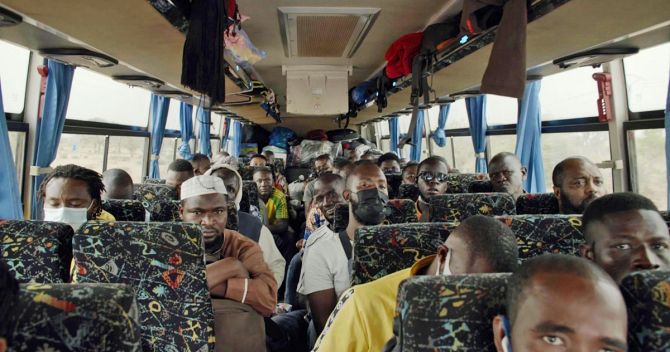 When Nigerian film-maker Ike Nnaebue was in his early 20s, he made a trip from Nigeria to Benin, Mali, Mauritania and then to Morocco.

Like many young Nigerians, his plan was to cross the Mediterranean Sea and somehow reach Europe.

The plan got derailed but now, 21 years later, Nnaebue makes the same trip and as a documentary film-maker, he captures the hopes and disappointments of young Nigerians who are still making that journey.

No U Turn is a fascinating documentary, where Nnaebue travels through the underbelly of these African countries, all struggling economically.

He meets a range of Nigerians: Young men and women, many who stopped on the way and did not attempt to complete the treacherous journey.

He interviews his subjects, not judging them, but trying to understand their situations and compulsions.

There are language challenges: Nigerians speak English, while most of the other countries are former French colonies.

Yet many Nigerians hold back, waiting to earn enough money and then perhaps return home.

No U Turn received a well-deserved special mention in the Berlinale Documentary Award category. 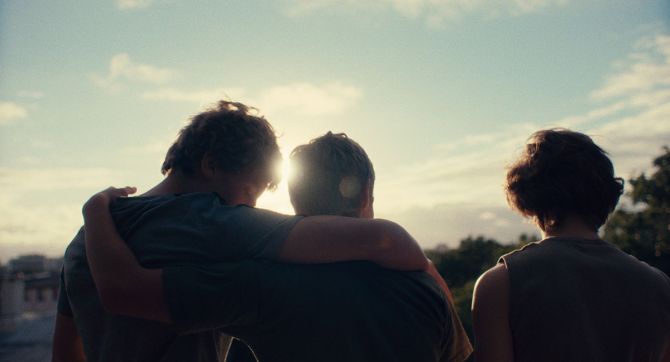 In Beautiful Beings, Icelandic Director Guðmundur Arnar Guðmundsson weaves a coming-of-age narrative around a group of working-class teenagers, whose lives are intertwined with effects of drugs, alcohol, bullying, gangs and early sign of sexual fluidity.

The four main characters are friends from school and include Balli, a shy boy, whose mother has drug addiction and his abusing stepfather is in jail, at least for the first half of the film.

Konni is a chubby kid who has a sweet face but a violent streak as he often goes into rage and gets involved in brawls.

Siggi goes along with rest, never asserting his personality.

Addi is the calmest of the lot whose parents are separated and mother is into spiritualism.

The routine lives of the teenagers take a sharp turn when Balli's stepfather is released from jail.

There are tough decisions the teenagers make which eventually challenge their friendships.

But throughout the film, Guðmundsson guides his characters and ensures that they do not stray too far and lose their moral compass.

Rosa (Lina Siciliano) has a vague memory of her mother's death when she was young, and she is haunted by that imagery.

As a child and now an adult, she has been under the care of her grandmother and an overbearing, abusive uncle.

Set in a picturesque southern Italian village, Una Femmina -- A Code of Silence has a beautiful glow.

But the film is a riveting account of a family with dark secrets and the presence of mafia and how the villagers, including Rosa's family, are accepting of crime and violence in their daily lives.

First-time Director Francesco Costabile has made a powerful film about a fearless, young woman, who will go to any length to free herself from controls of her family and traditional Italian set-up. 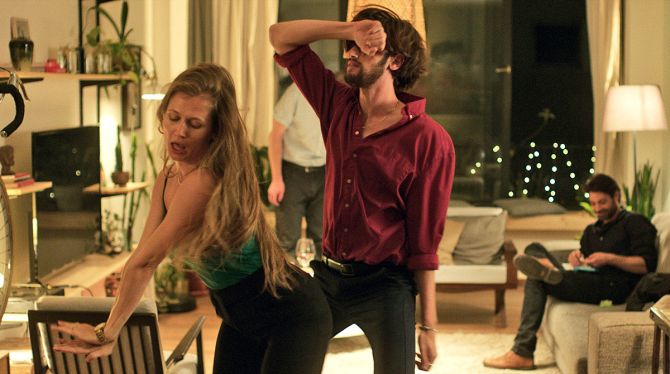 Ben (Shlomi Bertonov) is a seemingly liberal Israeli gay man living in a large sunny apartment with his partner Raz (Ariel Wolf) in an immigrant neighborhood in South Tel Aviv.

The two plan to have a baby through a surrogate mother.

But Ben's mind is distracted.

One night from his window, he sees police beating up an Eritrean immigrant. Ben's own prejudice start to show as he begins to resent the presence of refugees in his neighborhood.

But Ben also feels guilty, partly because of his privileged position and that impacts his relationship with Raz.

Concerned Citizen is a piercing exploration of the divisions within the Israeli society dealing with occupied territories and also the African refugees amidst them.

Ironically, the same Israeli society appears progressive when it comes to rights of some other minorities, especially the LGBT community. 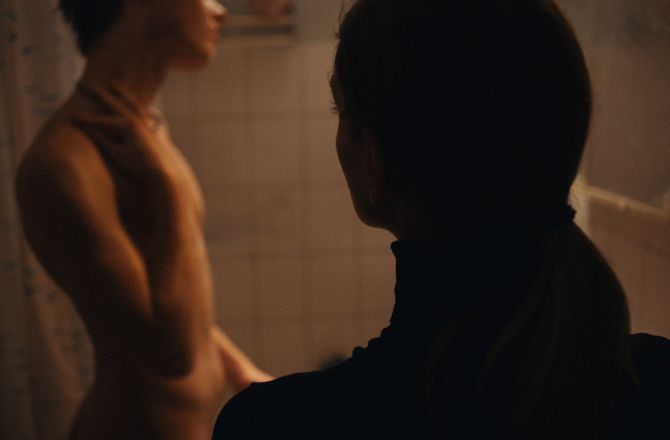 Incest, specially the uncomfortable sexual relationship between a mother and son, is a taboo subject in most parts of the world.

But a few European film-makers have tackled the topic with care and nuanced touches.

Louis Malle made Murmur of the Heart (1971) in France and Bernardo Bertolucci directed Luna (1979), a story about an American actress in Italy with a teenage son who has drug addiction.

Now we can add Grand Jete to this small selection of films.

Nadja (Sarah Nevada Grether) was a teenager when she had her son Mario (Emil von Schönfels).

But Nadja wanted to focus on her dancing career and so she left the boy with her mother.

Nadja is immediately drawn to her son, but not as a mother. She is physically attracted to the young man.

Like Malle's and Bertolucci's films, Grand Jete will make some viewers quite uncomfortable. But Director Isabelle Stever handles the subject very sensitively, not judging her characters.

That makes Grand Jete a disturbing but compelling watch. 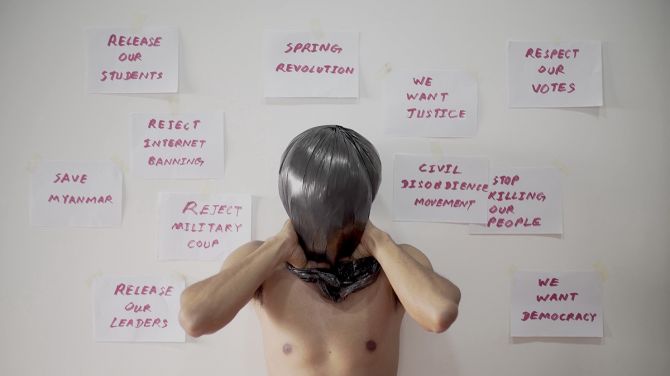 Politicians and activists were put behind bars and foreign media was shut out.

Little news came out of the Southeast Asian country.

But now, thanks to the brave efforts of the country's activists and citizen journalists, documentary evidence has been compiled which shows that people are not taking the repression quietly.

Myanmar Diaries is a collection of home videos, shot from within apartments and on the streets showing citizen protests in Myanmar.

There are personal documents, heartbreaking stories -- a teenager discovers that she is pregnant but finds it hard to tell her boyfriend, who is leaving the city to join a group of revolutionaries; a middle-aged woman begs young policemen to quit their jobs, reminding them that they are old enough to be her sons.

The project was put together by a group calling itself Myanmar Film Collective.

There are no individual credits at the end of the film.

The Myanmarese film-makers preferred to remain anonymous, while non-Myanmarese who worked on the film declined taking credits out of solidarity with the locals.

Myanmar Diaries is a rare, intense look at a country in crisis and no wonder, it won the Best Documentary Award at this year's Berlinale. 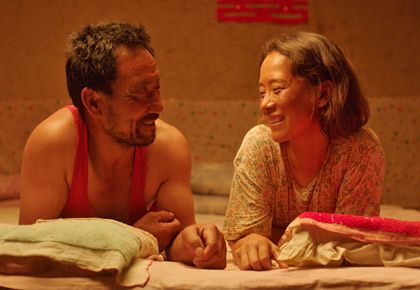 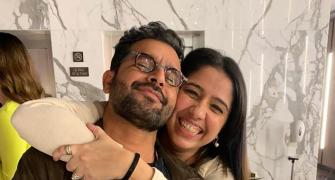 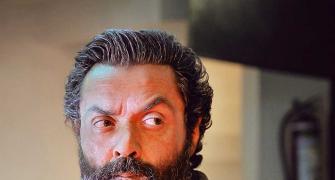 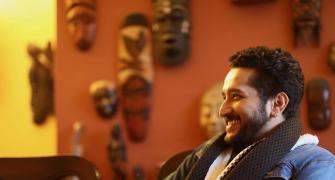 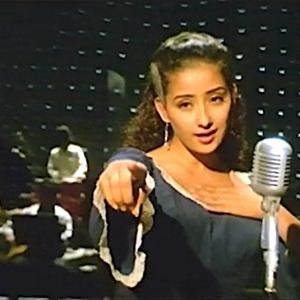 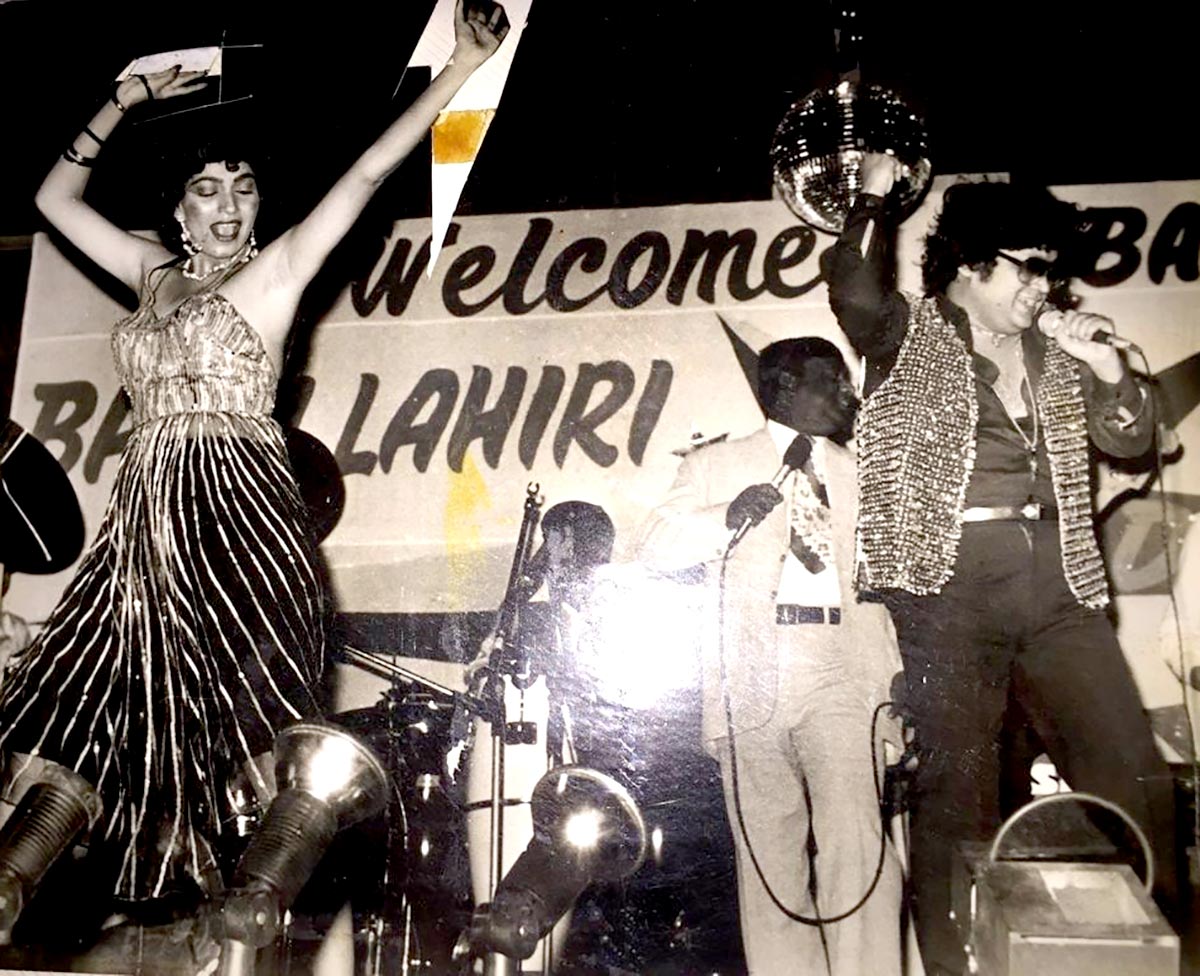