After working on Mr India and Sagar, Partho Sen-Gupta left to study filmmaking in France at 26. He returns with the dark and moody Sunrise. 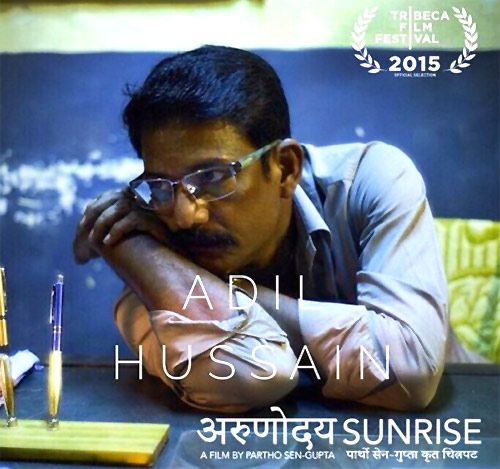 Partho Sen-Gupta worked as an art director on major Bollywood films in the 1980s before he went to France to study direction.

His second film Sunrise took a while to make because of financing issues. Sunrise had its world premiere at the Busan International Film Festival in South Korea.

A dark moody film in Marathi, Sunrise stars Adil Hussain and Tannishtha Chatterjee as a Maharashtrian couple dealing with the loss of their young daughter.

The child may be missing or dead, but the film looks at the mental framework of the parents and how they cope with the loss.

Sunrise had its world premiere at the Tribeca Film Festival. Sen-Gupta was in New York for the festival. He spoke to Aseem Chhabra for Rediff.com after the New York premiere.

I loved the neo-noir look of the film.

Yes it is homage to film noir. Critics have referred to it as neo-noir. I think neo-noir pushes the characteristics of the noir genre, where the bad guy is shown from the beginning. I have made him into a shadow, which is a noir characteristic, but the shadow will always be of the bad guy.

A lot of what you show in the film -- the shadow and the actions, it's never clear if it is really happening or if it is in the guy's head.

Absolutely. For me the story is of a couple who have had a loss. It's probably been seven or eight years. The man has been fighting his own battles of masculinity, his being a man, a policeman and a father, and yet he could not protect his child and he cannot find her.

The wife in her own way has locked herself in her imaginary world, imagining things. So they live this fragmented life. But when he comes home he is a caring, loving partner -- makes tea for her, bathes her.

The police station is real, but the moment he leaves that setting it perhaps becomes imaginary. This happens in classic settings where there is a hero and his daughter has been taken away to the villain's castle. And he goes there to save his daughter or the princess.

So it is a classic structure but I play with it whether it is real or not.

There is actually the villain's castle in the film -- the brothel where you have the young girls locked up.

That is real. This is something I researched -- that it is horrible that these kids live in Mumbai brothels, but they don't leave. They have seen one girl trying to leave and she gets beaten up and then out of fear they don't leave.

It is always the fear instilled in the young children by the adults and they do not leave.

I liked the look of the film because of the choices you made. You spoke after the screening that the monsoon just started when you began shooting, because the shoot got delayed. And you shot the film mostly at night, except for in the beginning and end.

I understand noir works in the darkness. But what kind of planning you did for the look of the film?

There were accidents upon accidents, but as a director you have to exploit those chance happenings.

My DoP (Director of Photography) Jean-Marc Ferriere is French, but he lives in Rio and his visa got delayed by two weeks.

When he arrived, the rains had already started. So I said let us just use the rain. We decided to shoot mostly at night, because everyone sleeps during the day in any case.

But would you shoot through the night?

Actually we could shoot only very little every night. We would have to stop by 4 am. Because in Mumbai there are crows and they start cawing at four in the morning.

We'd do some of the scenes where we did not need the sound -- like car shots -- around that time. But we couldn't do any scenes with the sound at that hour.

It was very tight and we had to shoot very fast.

That's how we worked very fast with Adil. He was fantastic. I didn't have to say anything to him because we had rehearsed for about 15 days before. We would look at each other and communicate with our eyes.

And he is a very intelligent actor.

Yes he is. Tannishtha, I had worked with before in Hawa Aane Dey and she recommended Adil to me. I had told her that her role was going to be small, but she was okay with that.

Adil hadn't done any films then.

When did you start working on this project?

We started working on it in 2008 and Adil was new to films at that time.

So all his work including Life of Pi happened after that?

I don't like the Indian style of acting. And he was thrilled for those reasons.

When did you shoot the film? And why did the delay happen?

We shot it in 2013. The delay happened because NFDC (the National Film Development Corporation) took a long time for the contract to be signed and the money to be allocated to us. NFDC is a 50 per cent partner in the project. Part of the money came from France. So the film is a French-Indian co-production.

How did the French connection happen?

I had gone to school in France and the French producer was known to me.

You live in India now?

I live in Sydney, because my partner has a job there.

What took you to Australia?

My partner is a sociologist and she works at a university there.

I was looking at your bio. You worked in Bollywood films.

In 1989, I was hired on a French film. I then started learning French at the Alliance Francaise and that led to work with the French consulate. I got a chance to go to France for a short course. Then I got a four-year scholarship to study film direction in France.

I was 26 and I left my art direction career to spend four years in France.

I directed five shorts there. I made my first feature in 2001. That's Hawa Aane De.

That film never opened in India.

There were political issues and the censors asked the film to be cut and that would have made it a short film.