News
Business
Movies
Sports
Cricket
Get Ahead
Money Tips
Shopping
Sign in  |  Create a Rediffmail account
Rediff.com  » Movies » Everything you wanted to know about Jayalalitha, actress

Long before she became a political legend, there was Jayalalitha, the actress. 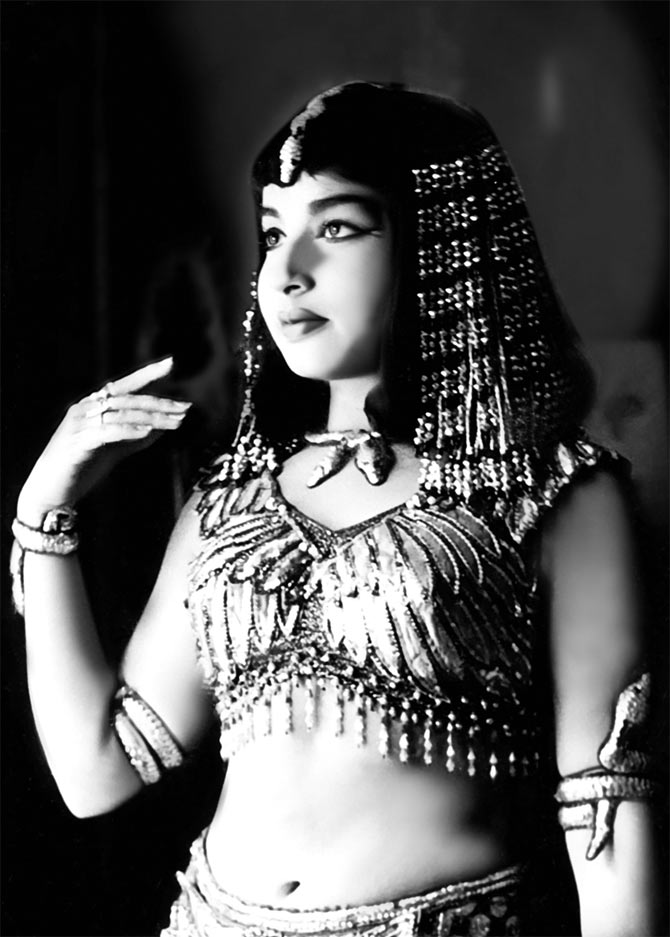 Born on February 24, 1948 in a family that served Maharaja Jayachamarajendra Wodeyar of Mysore, she was named Komalavalli at birth.

She lost her father when she was just two, and her mother started working in films to support the family.

Though reluctant to work in films initially, she took the cinema world by storm.

Within a few years, she had worked in all southern languages, and with cinema legends M G Ramachandran, Sivaji Ganesan, N T Rama Rao, Krishna and Gemini Ganeshan.

At a time when heroines appeared demurely clad in saris on screen, Jayalalitha started the trend of wearing short-sleeved dresses, skirts and tight pants. 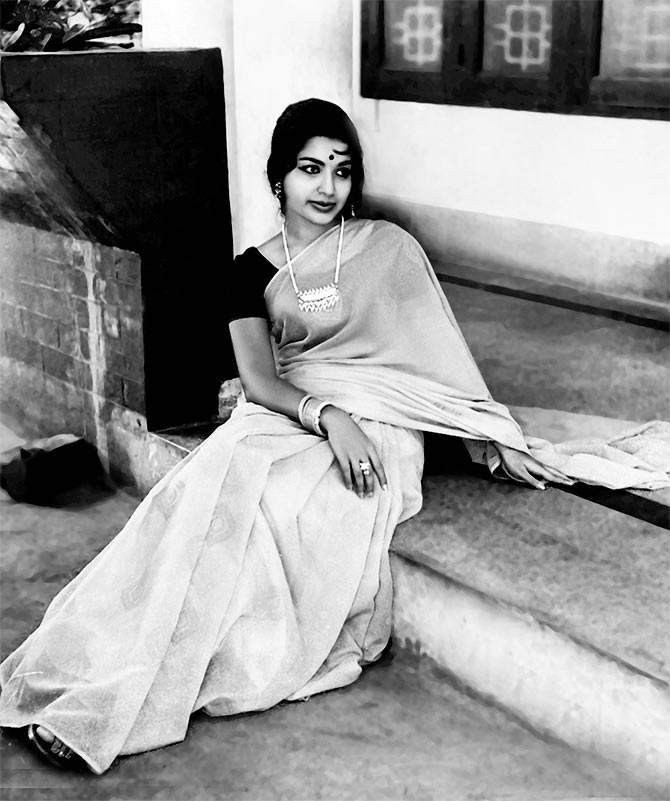 Jayalalitha's first film was an English language film, Epistle, which released in 1961 when she was only 13.

The film was directed and produced by Shankar Giri, whose father V V Giri later became President of India.

In 1964, when still in school, she played the lead in her first Kannada film, Chinnada Gombe.

The film was shot during her summer vacation, as she did not want to miss school. An exemplary student, Jayalalitha studied at the Bishop Cotton Girls High School in Bangalore before moving to Chennai where she attended the Church Park Presentation Convent. 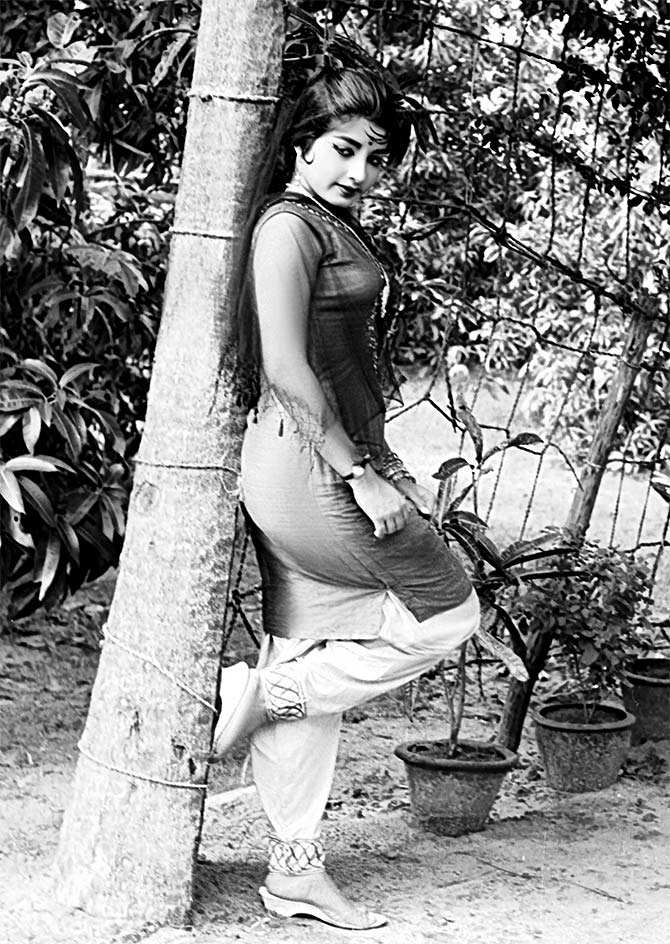 An excellent dancer, Jayalalitha was trained in Bharata Natyam, but was equally proficient in Mohini Attam, Kathak and Manipuri.

In 1972, the Tamil Nadu government honoured Jayalalitha with the Kalaimamani Award, which is given by the Tamil Nadu Iyal Isai Nataka Manram for excellence in art, dance and drama. 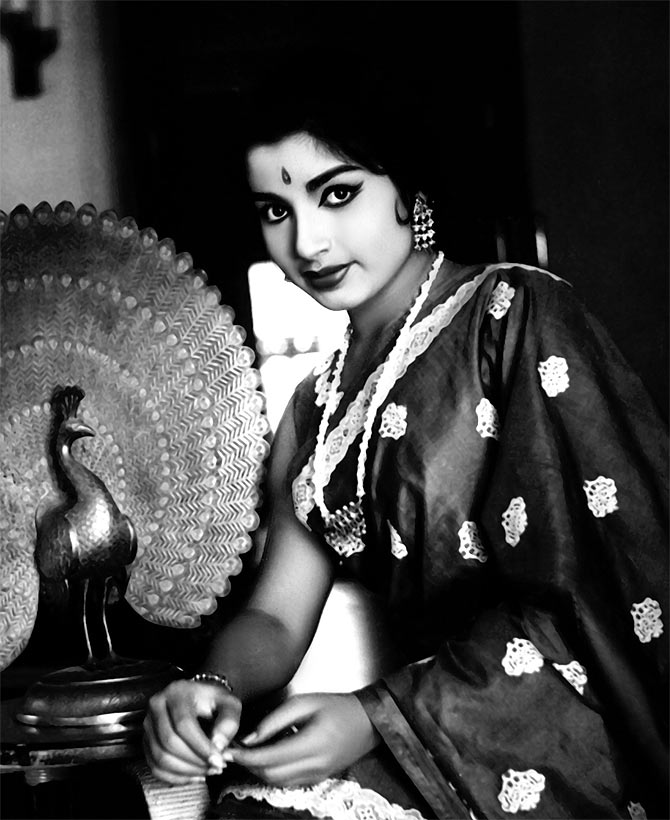 The magic of Jayalalitha and MGR

Jayalalitha made her debut in Tamil cinema with Vennira Aadai, in which she played a schizophrenic widow.

She received rave reviews for her performance, but it was Aayirathil Oruvan (1965) opposite Tamil superstar M G Ramachandran that changed her life.

Jayalalitha was just 17 while MGR, at 48, was already a legend, with some 80 films to his credit.

The two actors created magic on screen. They became a rage overnight. Aayirathil Oruvan is considered one of their best films ever.

Directed and produced by the legendry B R Panthulu, the film is about pirates, slavery, and the independence of labourers.

Jayalalitha's charm and charisma as a beautiful princess complemented MGR's serious character in the film, making it far more appealing. 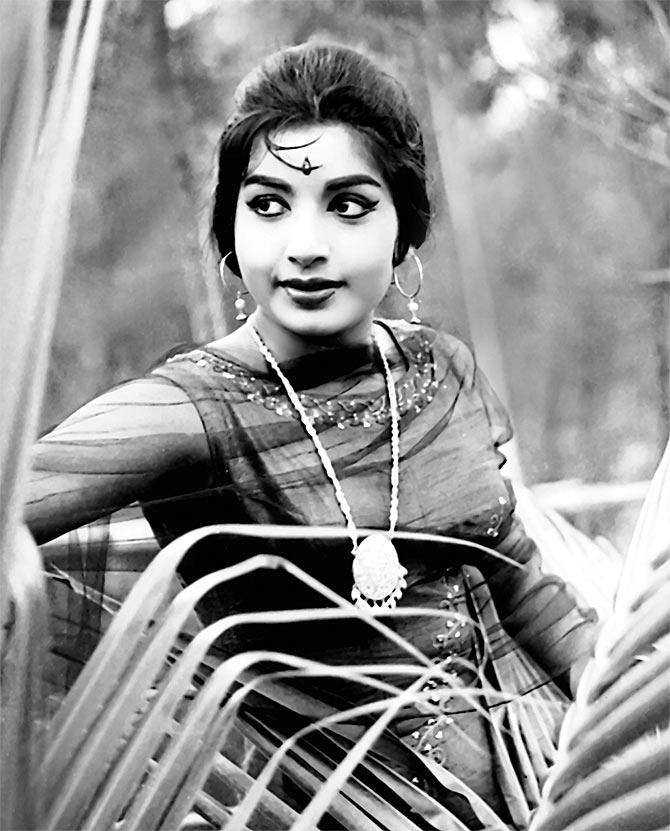 Adimai Penn was originally shot with B Saroja Devi in the female lead, but after her marriage halfway through the film, her scenes were deleted and Jayalalitha was cast in a dual role.

Adimai Penn broke many records. For the first time in Tamil film history, a movie had 400 housefull shows in four theatres in then Madras.

Jayalalitha plays a peasant and a queen, two very different characters which she carried off with equal conviction. 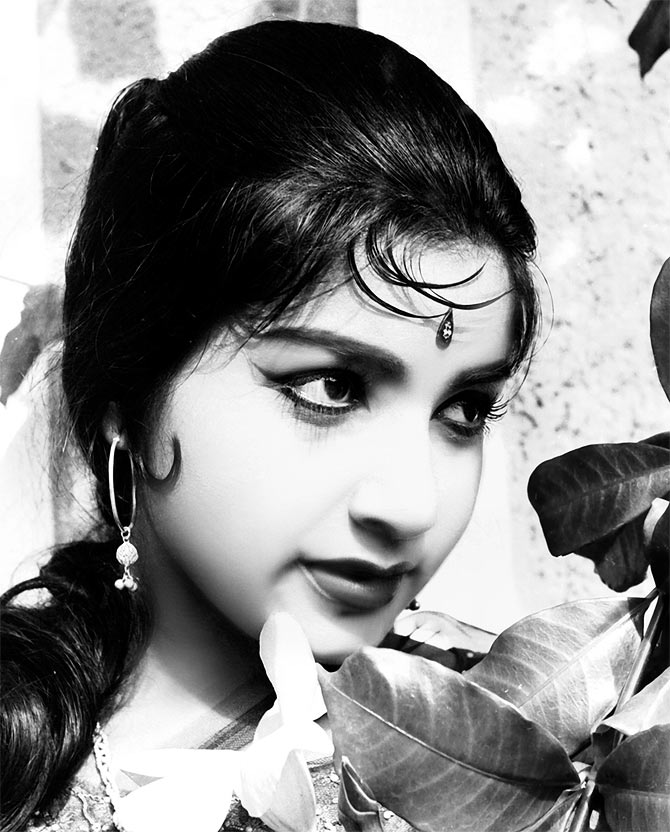 Jayalalitha worked with Sivaji Ganesan in 17 films, of which 15 were declared golden jubilee hits.

Motor Sundaram Pillai (1966) was their first film together. Jayalalitha played his daughter in the film.

In Galatta Kalyanam, which released in 1968, she was paired opposite Sivaji.

Galatta Kalyanam, a romantic comedy, was directed by C V Rajendran. Jayalalitha delighted audiences with her flair for comedy.

It was this film that created a fan following for Jayalalitha and Sivaji Ganesan, and made them one of the most sought after pairs in Tamil cinema. 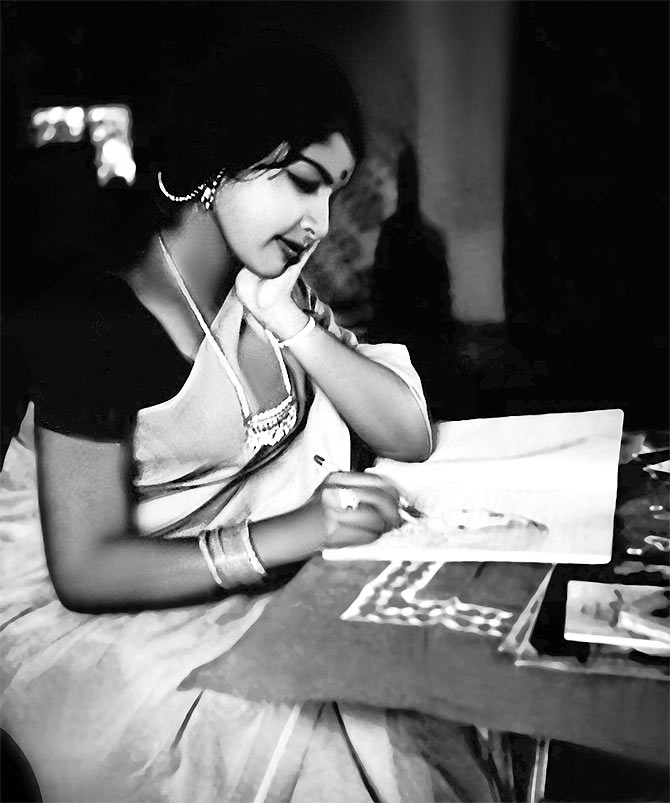 Jayalalitha made her Hindi film debut in 1968 with Izzat co-starring Dharmendra and Tanuja.

She plays a spunky Adivasi belle, Jhumki, in love with Dharmendra, who is far above her socially.

Her feisty role earned her much appreciation and also showcased her dancing talent. But she did not make another Hindi film. 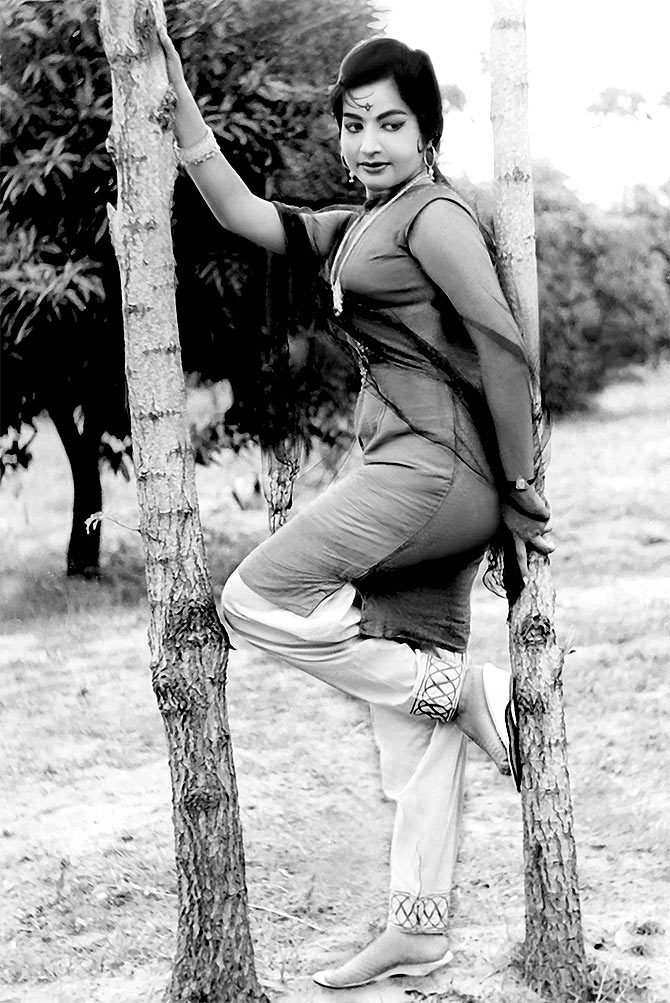 Goodachari 116, the first spy film in Telugu, starring Jayalalitha and superstar Krishna, became such a smash hit that many sequels were made in later years.

In this James Bond style film, Jayalalitha played a vamp-like character. She was at the beginning of her career, and Goodachari 116 brought her recognition.

Jayalalitha played the dual roles of Devi Sathyabhama and Chandrasena while N T Rama Rao essayed the role of Lord Krishna and Lord Rama. There are about 38 songs and shlokas in the film. 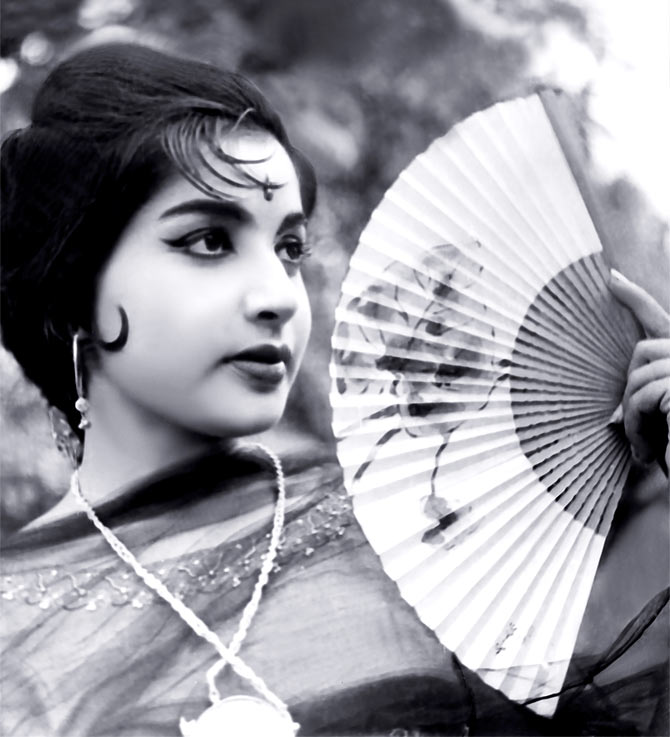 In 1992, when Jayalalitha was chief minister, she made a brief appearance in Neenga Nalla Irukkanum, in which she portrayed herself and was seen crusading for total prohibition in the state. The film bombed at the box office.

Nadhiyai Thedi Vandha Kadal, which released in 1980, is considered her final film as an actor.

Directed by B Lenin, it had Jayalalitha and Sarath Babu playing the lead roles.

Though it did not do very well at the box office, it was appreciated for its music.

This is the only Jayalalitha film with music by maestro Ilayaraja. 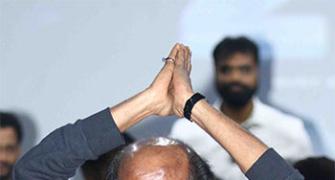 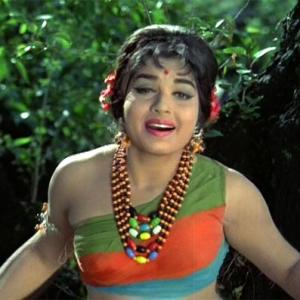