Mehendi ceremonies are an important prelude to Indian weddings.

Bollywood, of course, takes it notches higher and hosts elaborate ceremonies for their beautiful brides.

As Sonam Kapoor celebrated her mehendi ceremony on Sunday, May 8, we get into #Flashback mode, and look back at dazzling filmi mehendi events of the past. 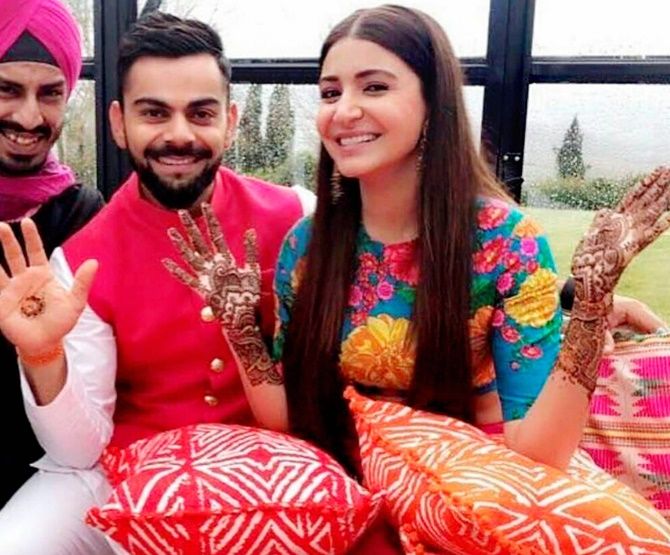 Anushka Sharma and Virat Kohli had a grand wedding in Italy, away from the prying media.

Anushkha chose bright colours for the mehendi ceremony, and Virat complemented her well. 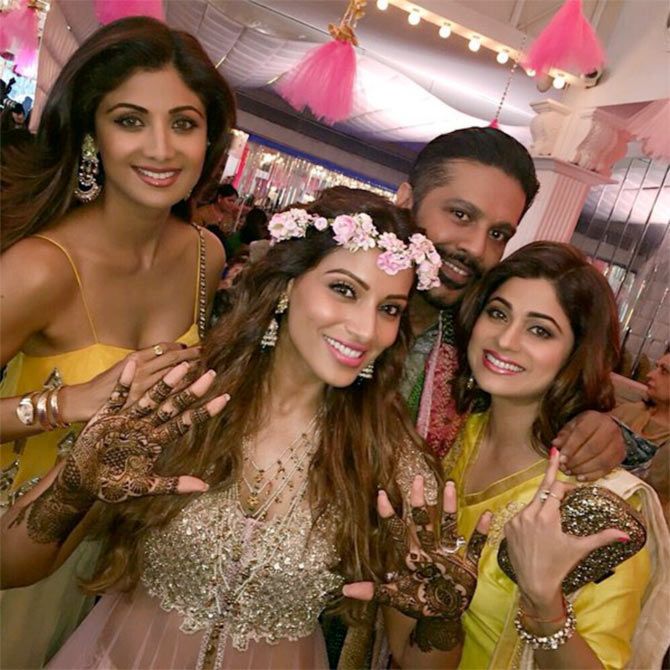 Just before her Bengali wedding to Karan Singh Grover, Bipasha Basu invited friends over for the mehendi ceremony.

Shilpa Shetty with sister Shamita Shetty and husband Raj Kundra (not in picture), Rocky S, Deanne Pandey and several others made sure to party with the bridal couple. 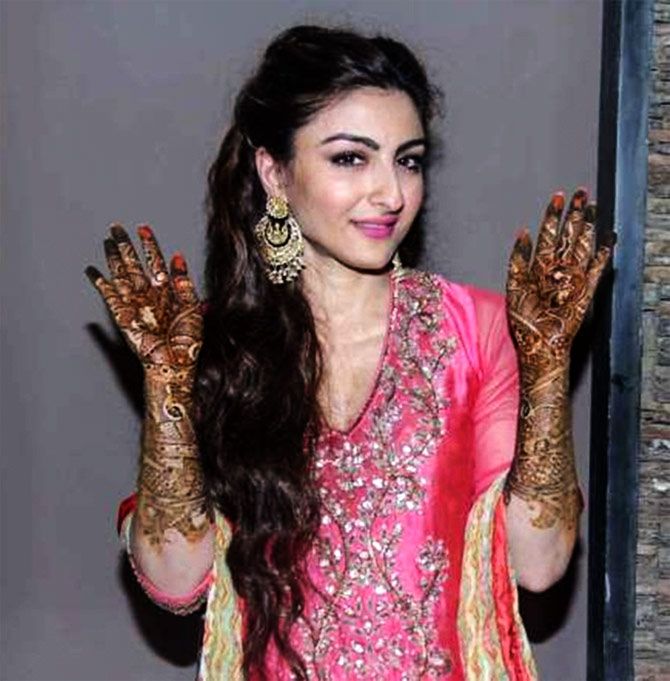 Like Bipasha, Soha Ali Khan's mehendi party was also held at her home. 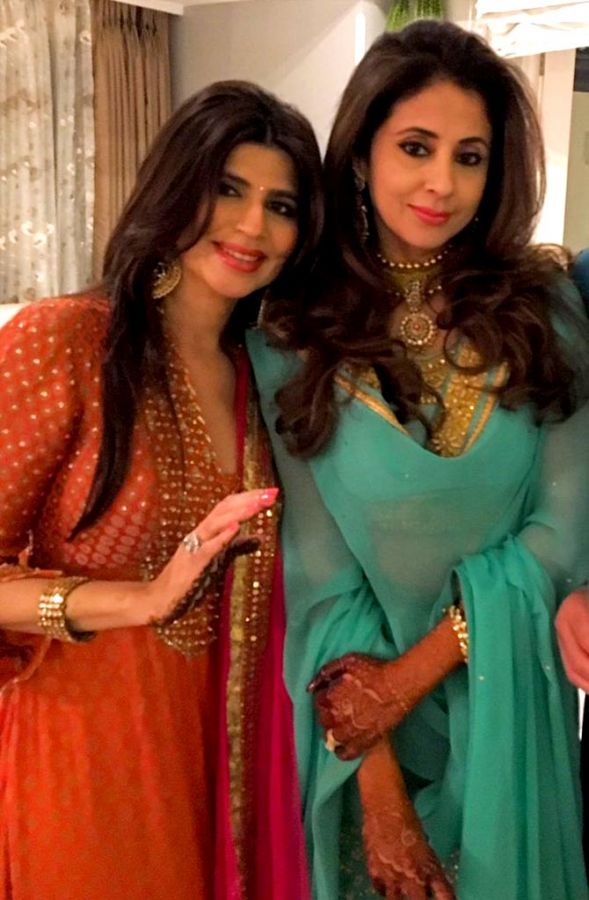 Urmila Matondkar had a quiet mehendi ceremony; Paulomi Sanghvi designed her jewellery for the day. 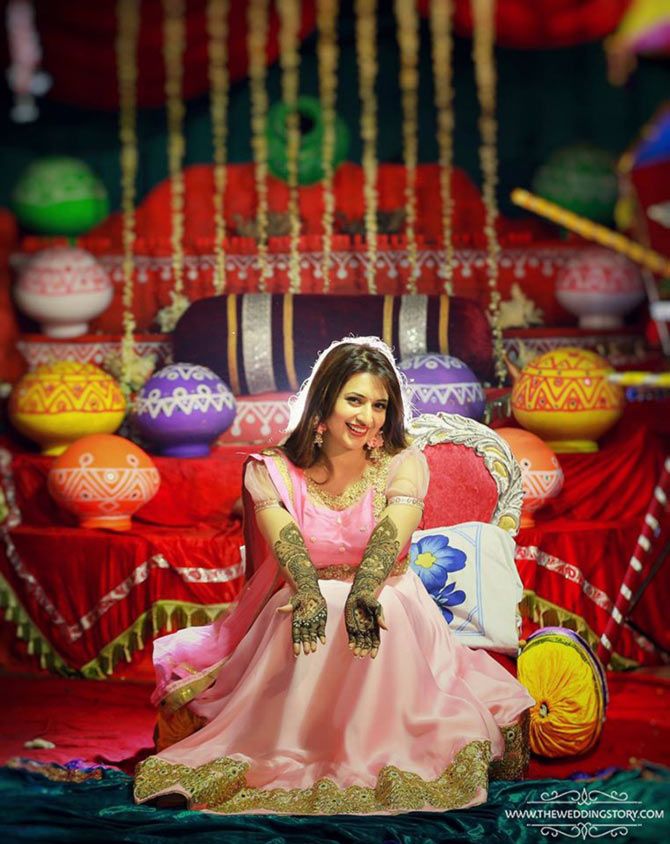 Television actress Divyanka Tripathi wed her Yeh Hai Mohabbatein co-star Vivek Dahiya in 2016, and the pictures were a treat! 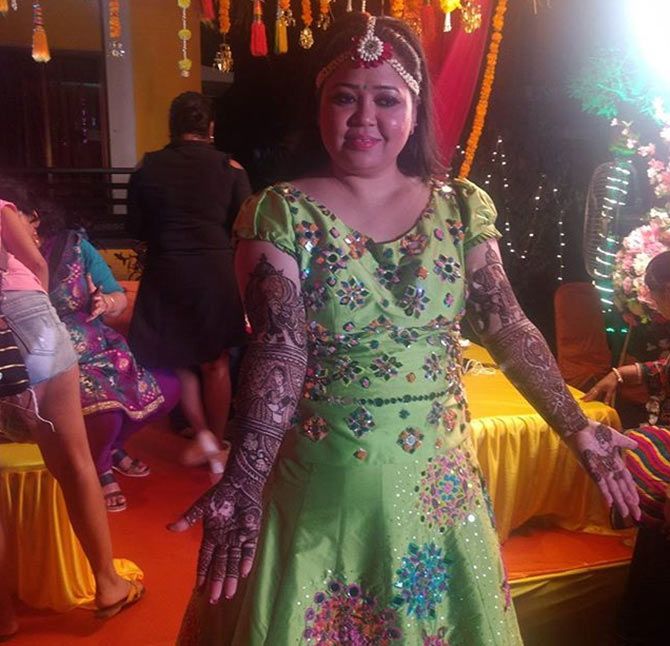 A day before the big day, Bharti chose the colour green to mark her mehendi ceremony. 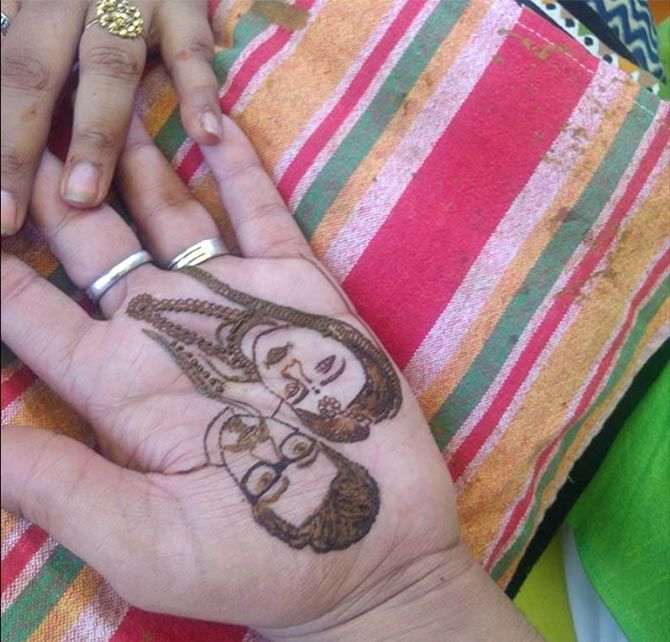 True to style, Bharti has a picture of herself and hubby-to-be Haarsh Limbachiyaa on her palm. 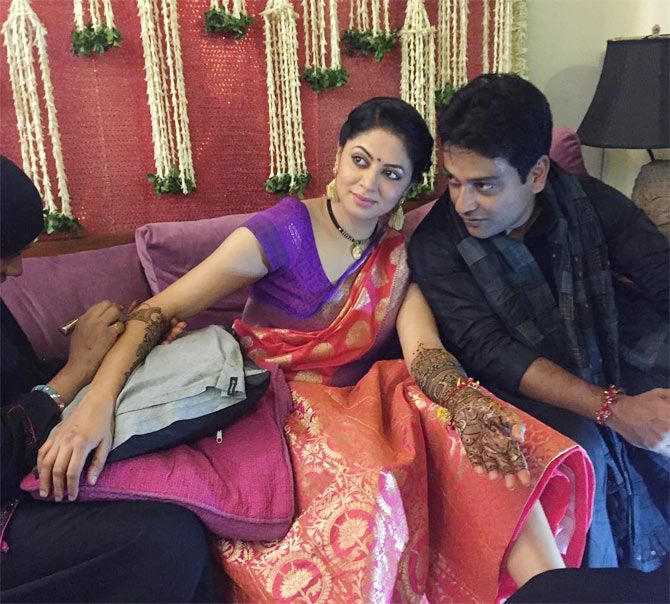 Television actress Kavita Kaushik, popular for her serial FIR, married Ronit Biswas and seemed to have as much fun as her guests at the mehendi ceremony. 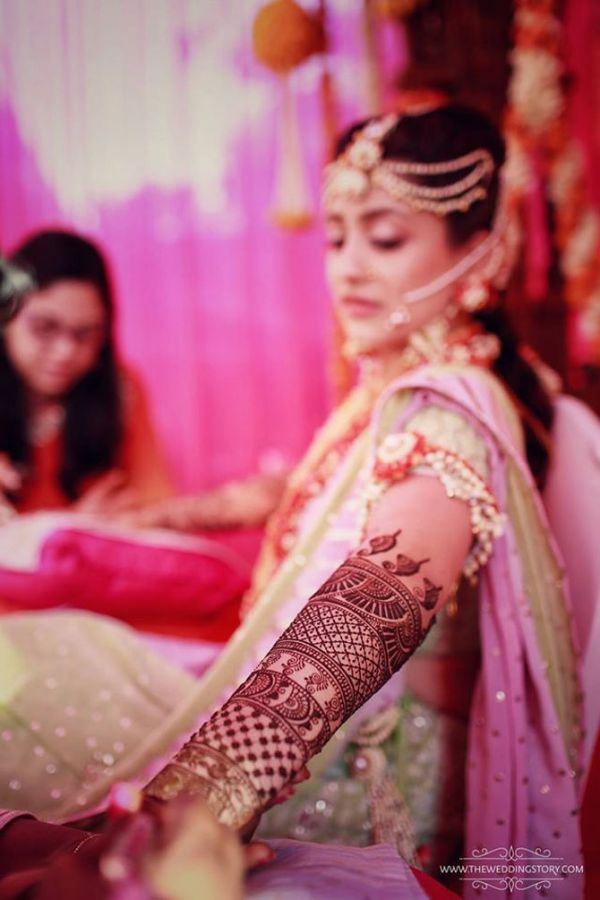 Neil Nitin Mukesh had a lavish destination wedding in Udaipur.

The mehendi ceremony had a lot of art and entertainment for the guests, from turban makers, who curated 45 different styles, to tarot card readers, to nail art and a live bangle making counter.

Bhiwai folk artists showed their artistry with fire and swords. There was a massage and champicentre. 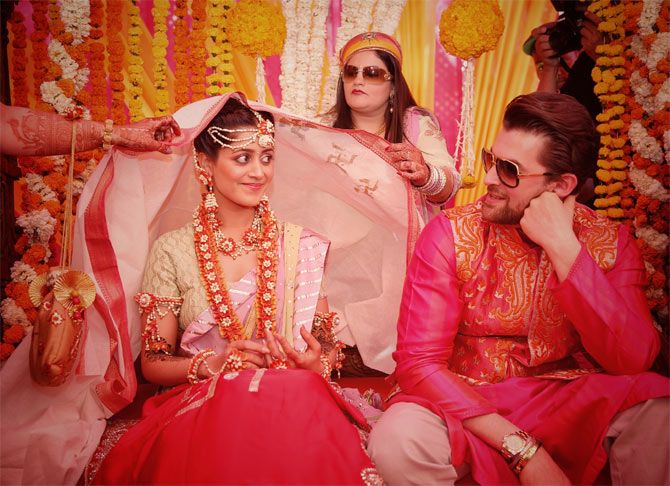 There may have been a lot of food and entertainment at the shaadi, but Neil may not have noticed. His eyes seemed to belong to his bride Rukmini. 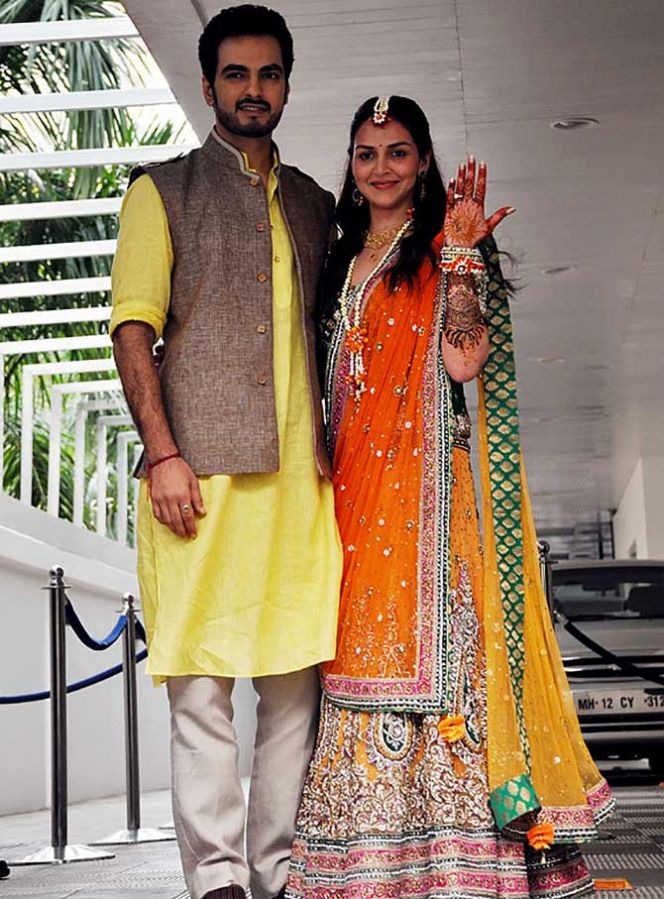 Esha Deol and Bharat Takhtani had a Kodak kinda moment when they posed at their mehendi ceremony. 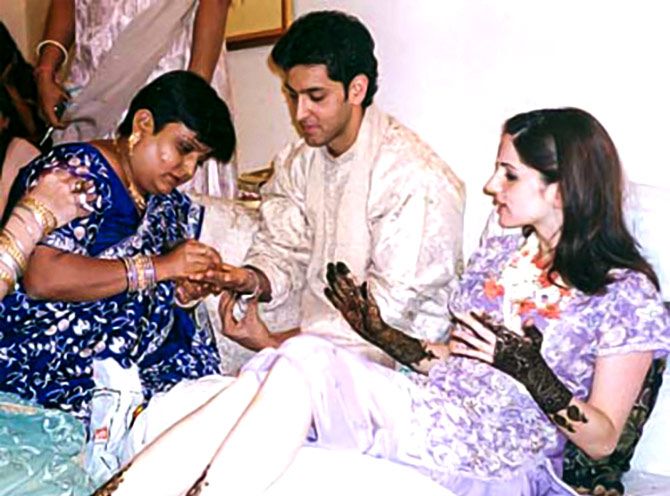 Years before these Bollywood weddings, stars had more informal ceremonies.

Here, Hrithik Roshan and Sussanne Khan get their mehendi in place by Veena Nagda, the reputed mehendi artist. 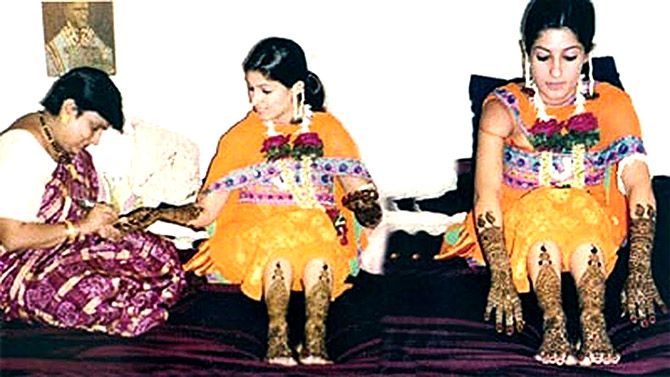 Veenaji, in fact, has done many Bollywood brides, including Twinkle Khanna. 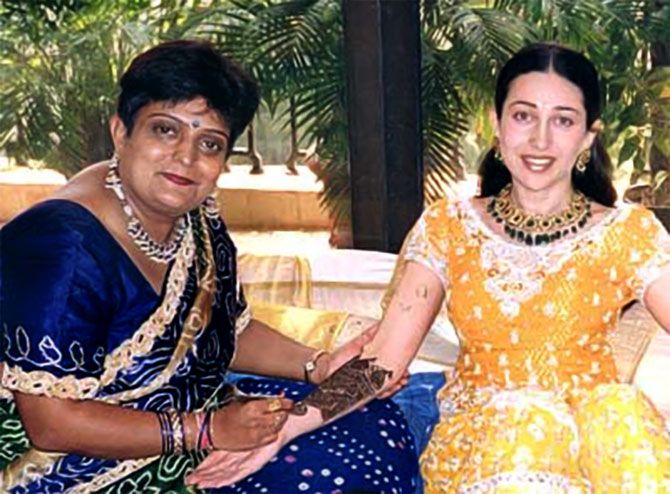 Do read Veenaji's interesting story about how she was called for Karisma Kapoor's mehendi ceremony. 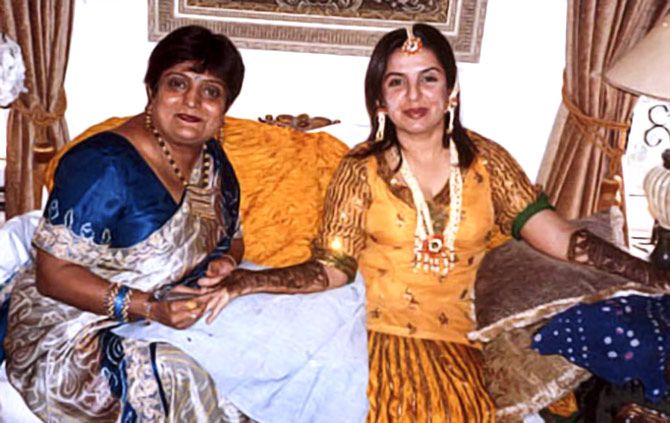 Farah Khan wears mehendi and a ghagra choli for the first -- and knowing Farah, only -- time in her life. 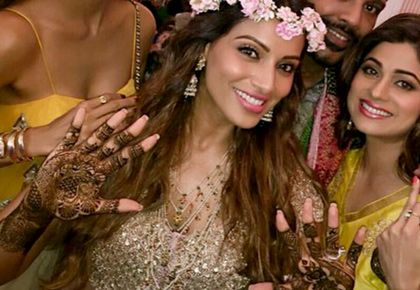