Shakespeare Wallah had been out of circulation for a long time, but a restored version of the film opened in New York on November 10.
It will travel after that to other cities in the US and hopefully, soon to India as well, says Aseem Chhabra, author of the bestseller Shashi Kapoor: The Householder, The Star. 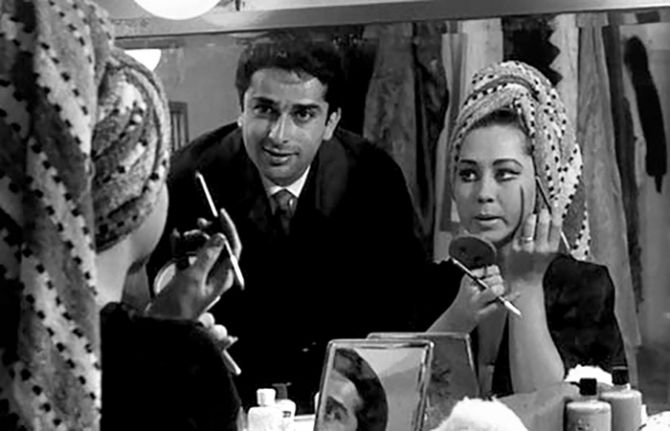 Towards the end of James Ivory's 1965 masterpiece Shakespeare Wallah, a handsome Shashi Kapoor (playing Sanju, a rich playboy), dressed in a tuxedo and black tie is sitting in a box seat in Shimla's Gaiety Theatre.

On stage, a group of traveling British actors are performing Shakespeare's Othello.

Suddenly a popular Hindi film actress, Manjula (played by the gorgeous New York-based Madhur Jaffrey) walks into the box seat area, and all eyes turn to her, disrupting the theatre performance.

At times Chekhovian in its content and style, Shakespeare Wallah ultimately projects the sad lives of the British actors desperately trying to keep Shakespeare alive in independent and changing India where audiences are more interested in commercial cinema and the movie stars. 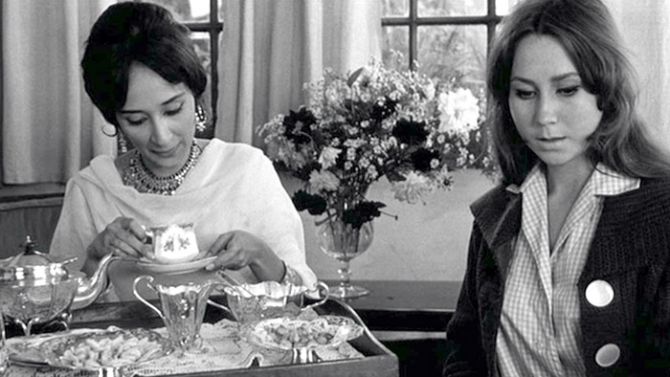 But more importantly, the film established the Merchant Ivory team -- led by Indian producer Ismail Merchant and American director James Ivory -- as bonafide independent filmmakers who over the next five decades gave the world some iconic, critically acclaimed films like Heat and Dust (also starring Shashi Kapoor, Madhur Jaffrey and Julie Christie plus Greta Scacchi), A Room With A View, Howards End and Muhafiz (In Custody), with Kapoor playing a tragic aging Urdu poet. 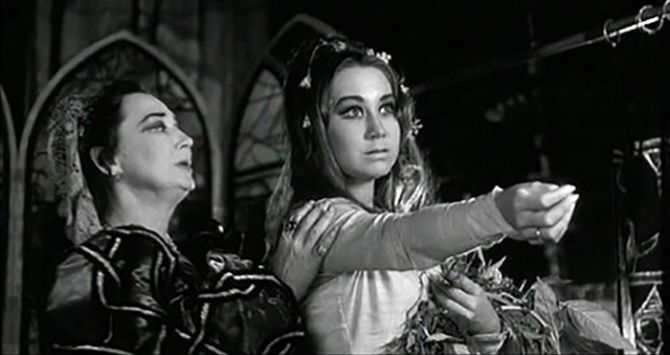 Shakespeare Wallah had been out of circulation for a long time, but a restored version of the film opened in New York on November 10. It will travel after that to other cities in the US and hopefully, soon to India as well.

Shakespeare Wallah is beautifully shot in black and white by Subrata Mitra best known for his work with Satyajit Ray -- from the Apu Trilogy to Devi, Mahanagar, Charulata and Nayak.

The Merchant Ivory team has scored a coup of sorts when they got Ray to compose the music for the film.

Four decades later, Wes Anderson would use some of these compositions in his India-focused dramedy, and a tribute to Ray, The Darjeeling Limited (2007). 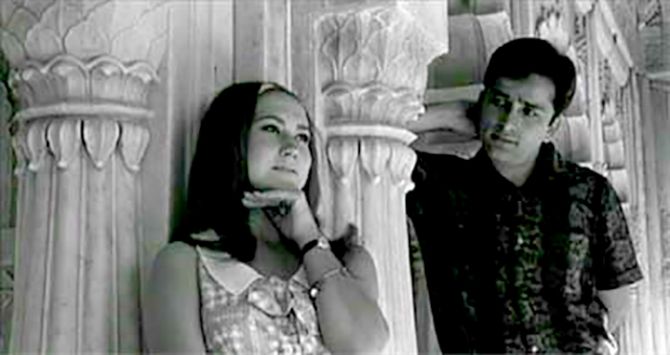 Ivory and Jhabvala first met Geoffrey Kendal and his wife Laura Liddell during the shoot of the first Merchant Ivory production, The Householder (1963). Their older daughter Jennifer was married to Shashi Kapoor (the lead actor in The Householder as well as Shakespeare Wallah).

Besides the Kendals (they played the married couple, Tony and Carla Buckingham), Ivory also cast their younger daughter Felicity as Lizie Buckingham.

Kapoor's Sanju flirts with Manjula, but as the film progresses he also falls in love with Lizzie.

Jennifer played a supporting role in Shakespeare Wallah too, making it a true family project.

Felicity Kendal was 17 at that time and was contracted to play the role for a small sum of Rs 75.

The Merchant Ivory team has always worked with tight budgets and was never known to pay big salaries to their actors.

In fact, Shashi Kapoor deferred his salary for Shakespeare Wallah and even for The Householder. He was eventually paid for the two films when he acted in his third production with the team, Bombay Talkie (1970). Years later, while speaking in an interview for the special features section of the Criterion Collection DVD of Shakespeare Wallah (released in 2004), Kapoor recalled: 'Because I had toured with Shakespeareana, I had been in close contact with the family... I had no idea that she would be so good.'

'This girl with no experience in the movies was terrific. She was so good that she would totally get involved in the character and forget her real self. Felicity Kendal was stealing the show. It was her film,' Kapoor said.

And there was the matter of some intimate kissing scenes between Kapoor and his sister-in-law.

In the same Criterion Collection interview, Kapoor said: 'I think it was the first film that I ever kissed in. It was a bit embarrassing for me and I realised that it would be very embarrassing for Felicity.' 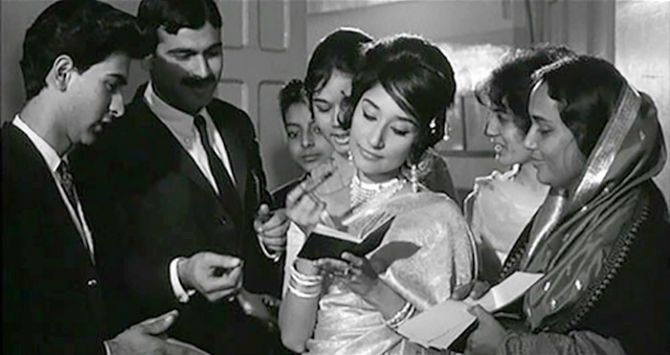 Madhur Jaffrey was a theatre actress and a close friend of Merchant and Ivory from the early 1960s.

In fact, the two partners were introduced to each other through Jaffrey's then husband, actor Saeed Jaffrey.

Shakespeare Wallah was Madhur's first film and she was thrilled to be working with Shashi Kapoor, who by then was already a star in the Hindi film industry.

Despite a lot of focus on the handsome Shashi Kapoor and the other young actors, the strongest performance in the film was given by Geoffrey Kendal.

In one of the core scenes, a distraught Kendal sits in his bedroom as he talks to his wife in real and reel life.

He recalls the days of his youth and the love he got from audiences in Britain. He talks about the initial warm reception his troupe received in India.

But now, there is hardly any interest in Shakespearean plays in India, he says.

'It's such a rejection,' he says, sounding heartbroken. 'Rejection of me, of everything I am, everything I have done. Why are we here, instead of Sheffield or Bristol or at least somewhere like that? Did I have to come all the way to India because I was not good enough for those places?' 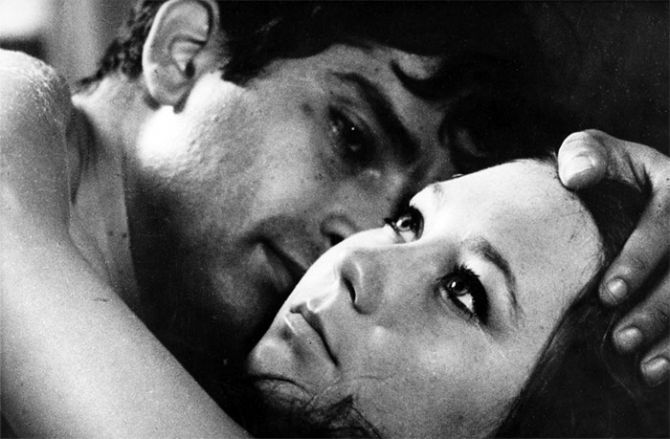 IMAGE: Shashi Kapoor remembered it was embarrassing to do intimate scenes with his sister-in-law in Shakespeare Wallah.

Critics in the US were quite pleased with the film.

Variety's critic appreciated the film's 'naive charm' and added: 'There is also a very confident performance by Shashi Kapoor, as the Indian playboy.'

The usually tough Bosley Crowther of The New York Times was kind to Shakespeare Wallah: 'Within the telling of this story (of the struggles and the last days of the traveling British theatre group), Mr Ivory and his almost perfect cast... have managed to convey a countless number of strong implications and subtle hints that quiver with irony, sadness and benign resignation to change.'