A cow that speaks, a question on patriarchy and the story of a 17th-century poet -- Sanskrit filmmakers are finding new ways to revive the 'dying' language. 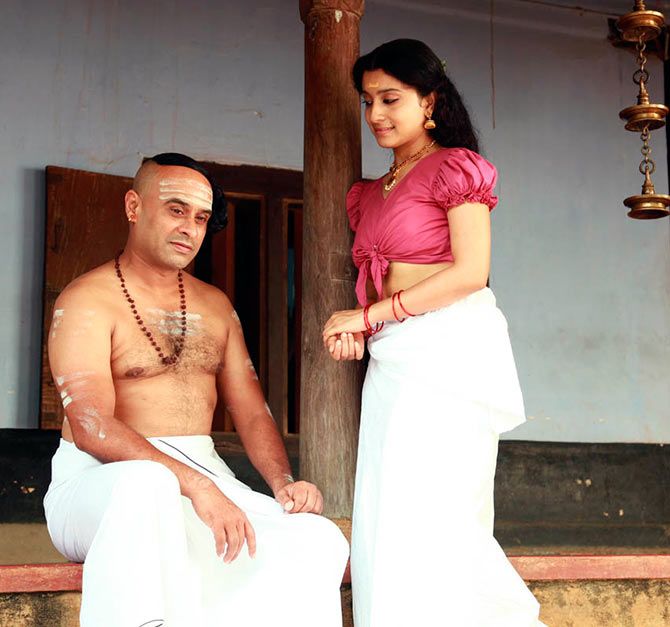 A woman in a flowing white skirt and a blouse looks at her lover with tears in her eyes and he matches her tears with equal exaggerated pain.

Their attire makes one expect them to start speaking in Malayalam or Telugu, and to the untrained ear, that could well be true. But pay close attention and it becomes apparent that they are speaking Sanskrit.

This is Priyamanasam, believed to be only the third Sanskrit feature film ever made.

In a different story, lilting flutes introduce one to a village called Karunadu on the banks of river Kaveri, in a short animation film sequence. Going by the music and the pastoral setting that accompany the animation, there's little to prepare the viewer for the Sanskrit narration that follows.

A young girl warns of the bridge that humans want to build over the Kaveri and the havoc that it could wreak over the entire village. A fully crowd-funded venture, Punyakoti is the first animated film to be made in Sanskrit.

Ravishankar V, head at Center of Excellence, HR Services and Learning BPO at Infosys BPO and the writer and director of Punyakoti, is ecstatic with the response the project has gathered.

Ravishankar has been able to rope in big names, such as music composer Ilayaraja and actor Revathy, and has created quite a buzz on social media.

Based on a popular Kannada folk song by the same name, the film is a modern take on the fable of the "cow who always speaks the truth".

"There are such profound truths to be found when one reads Sanskrit. And there is no better way to acquaint children with the ecological disasters we are faced with than to do it through animals speaking in Sanskrit," says Ravishankar. 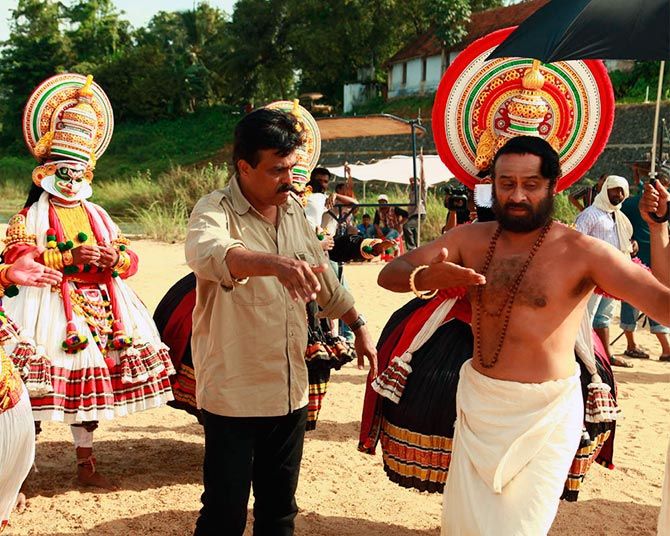 It is ironic that for a language that is believed to be several thousand years old, there is still scope for firsts. But this is also symptomatic of Sanskrit being relegated to the realm of pure scholarship, rather than being actively engaged with in a cultural milieu.

For Sanskrit enthusiasts and scholars, there aren't many options to experience the language outside their classrooms.

Reena Bhatnagar, a Sanskrit teacher at Somerville School in Noida, says the only theatre she remembers watching is Abhijñanashakuntala, the renowned play by Kalidasa.

"But even that was possible after I moved to New Delhi from Sitapur in Uttar Pradesh. There are no such opportunities in smaller towns," she says.

Bhatnagar has a PhD in Sanskrit and remembers speaking the language in college.

"But it never came naturally. Only those who come from a pure Sanskrit educational background -- where their entire education was in Sanskrit -- an speak it without it seeming contrived."

This could also be because Sanskrit was, according to some experts, a purified version of Prakrit, which was the spoken language of the masses.

Wendy Doniger, author of The Hindus: An Alternative History, writes, '...even in the Vedic age, Sanskrit was not what has been called a kitchen language, not the language in which you said, "Pass the butter".'

She further suggests that Prakrit, the 'natural language,' may have come before Sanskrit, 'the refined, secondary revision, the artificial language.'

This is perhaps also why films have been slow to come, especially when the ease with which characters speak has to be induced into the script because the language itself may not allow it. 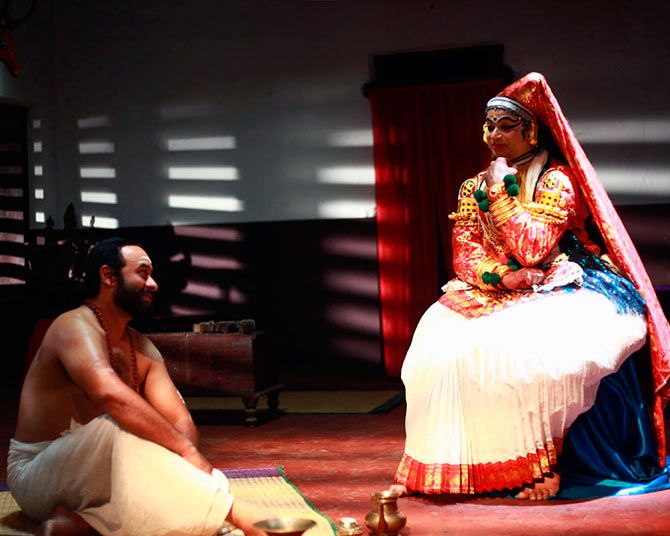 Prakrit was also the language used in written texts to denote that a character either belonged to a lower caste or was a woman.

This differentiation, though obvious in the written word, can be hard to decipher on screen.

In Priyamanasam, actor Prateeksha Kashi plays the female lead, but her dialogues are in Sanskrit. She calls the project both "challenging and exciting." Challenging because she had no prior knowledge, not even a beginner's understanding, of Sanskrit.

"But I am glad I was forced to learn the language. As a Kuchipudi dancer, this will be helpful for me in the future, too."

Classical dance forms, especially in southern India, use Sanskritised verses for their compositions. It seems that this is also why most films in Sanskrit are coming from Kerala, Karnataka and Tamil Nadu.

But this, scholars say, could be only partially true.

"If you take the case of Carnatic music, most singers do not know Sanskrit and only know the bhajan's broad meaning," explains H Poornima Mohan, Sanskrit professor at Sree Sankaracharya University of Sanskrit in Kalady, Kerala.

And yet, Vinod Mankara, director of Priyamanasam, chose for his film the story of Unnayi Variyar, the 17th-century poet who is credited with elevating the standard of Kathakali with his play, Nalacharitham.

The film was rejected by the Kerala Chalachithra Academy for 'promoting Hindutva ideology,' though Mankara believes that there is no overt religious trope in the film.

Mankara defends his film by explaining how the temple setting is necessary to its very plot.

"Variyar belongs to a community whose primary job is to make garlands for the deities, and for that, he and his beloved have to sit inside the temple. But nowhere in the film is the deity depicted outside this context," he says. 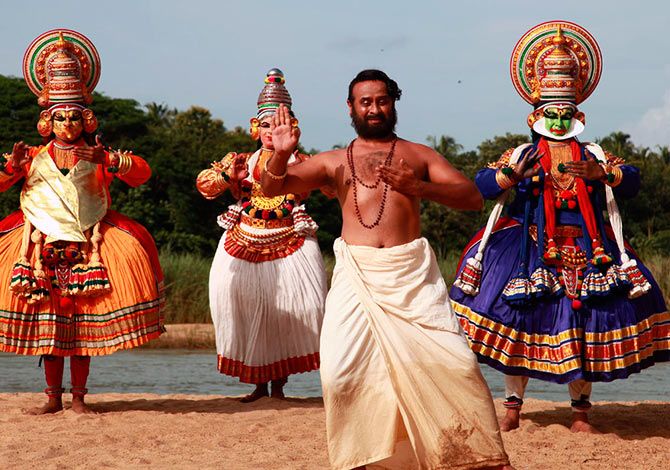 Mohan says that Priyamanasam belongs to the socio-religion-cultural genre. And much of the critique against Sanskrit films, including G V Iyer's, has been about the obvious religious themes in these films.

But experts believe that thinking of Sanskrit outside the realm of what is understood to be Hinduism today is a narrow approach to the language.

"I think that it is generally anachronistic and unhelpful to think about Sanskrit in terms of 'secular' or 'Hindu'," explains Audrey Truschke, Mellon Postdoctoral Fellow at the department of religious studies, Stanford University. Mohan believes that the themes of these films are also dependant on who makes them.

"I should think the reason is the man behind both Adi Shankaracharya and Bhagavad Gita. Iyer was a devout man with religious and spiritual inclination and was also incidentally well-versed in Sanskrit."

C S Venkiteswaran, National Award-winning film critic and a documentary film maker from Kerala, worries that till the time these films only look back at the "glorious past", their ideological framework may remain suspect.

"The various reform movements within Sanskritic traditions have to be respected. One cannot purely look at Sanskrit from a Brahmanical prism," he says.

Mohan agrees and adds, "The language needs to be separated from its so-called champions for it to really thrive."

And thrive it can, especially the way in which film makers and artistes are interpreting Sanskrit and adding to its literary universe.

G Prabha, a former professor of Sanskrit at Loyola College in Chennai, has just accomplished another first for the language -- the first socio-political film in Sanskrit.

"Ishti is, in many ways, a feminist film about the emancipation of a woman from oppressive patriarchal customs."

Mohan, too, suggests that there are many new and contemporary poems and short stories in Sanskrit, debunking the presumption that the language is "dead".

"Hindi is the language of the central government, and whenever a new word has to be added to the lexicon, say a word like computer, scholars dig into its Sanskrit origins for it," she says. 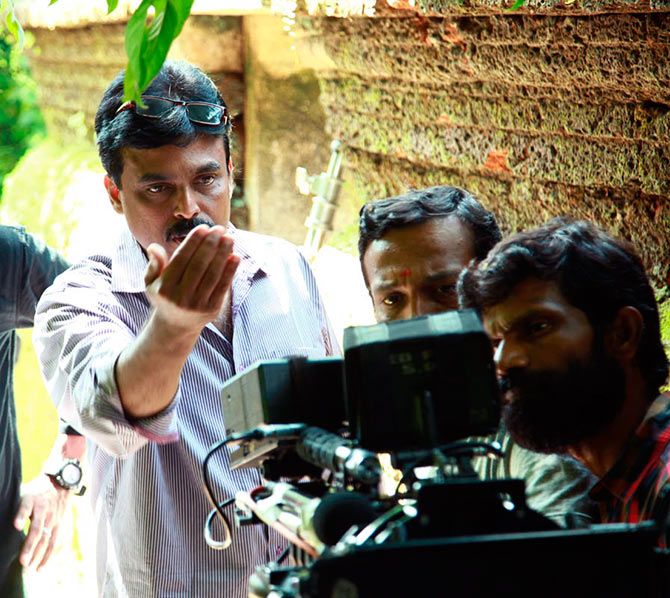 Though Prabha claims that he too applied to the Directorate of Film Festivals for Ishti to be screened as part of the International Film Festival of India, C Senthil Rajan, the director of film festivals, suggests that the only entry under the Sanskrit films category was from Mankara.

A renowned film critic, who requested he not be named, conjectures that this is perhaps because Ishti does not align with the ideologies of certain members of the IFFI jury.

These film festivals, then, are central to the success of Sanskrit films, especially since they don't see a commercial release.

Priyamanasam, made on a budget of Rs 1 crore (Rs 10 million) and funded by producer Baby Somatheeram, is now hopeful that it will see some commercial success after the recognition it has received. Prabha, who funded the film with his own savings, is cautiously hopeful.

"Though no distributor is interested in a commercial release, I am hoping that I will get to screen the film at more film festivals."

Till these films make it to the theatres, audiences, too, have only film festivals to rely on.