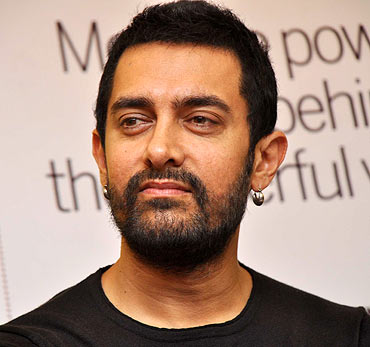 According to reports, Aamir Khan is all set to test his vocal cords in his new film, Dhoom 3.

Pritam Chakraborty, the music director of the film, has been asked to set aside all his assignments from June to focus only on the music of the latest in the Dhoom series. The movie will be directed by Vijay Krishna Acharya.

While we wait to hear Aamir's new song, here's a quick look at some of his previous numbers.

We first got a taste of Aamir's talent in this catchy song from Ghulam, picturised on the actor and Rani Mukerji.

The number become an instant hit, winning him praise from his peers as well as veteran singers.

The fast paced, peppy number had a rhythmic appeal to it, and was well received by the fans. The movie, however, tanked.

Music by: A R Rahman

Aamir's vocal talent caught the attention of music maestro A R Rahman, who asked the actor to lend his voice to one of the most celebrated festivals on screen, Holi.

With a little help from the lead singer Udit Narayan, Aamir brought out the true elements of masti and unabashed flirting in the song Dekhi Aai Holi . The chemistry between Aamir and Rani Mukerji also added spice to the song.

Music by: A R Rahman

Aamir Khan and A R Rahman came together again for the second time to give us this rather modern-day, slow and inspirational track.

Aamir's infused the patriotic number with enough depth to make the song worth a listen.

Aamir joined Babul Supriyo and Mahalaxmi Iyer in this tongue twister coupled with a whistling tune, which was fun to listen.

Aamir Khan started off the track tailor made for children with words written by Prasoon Joshi.

With music by S-E-L, it was no surprise that the song went on to become a hit with all age groups.