Which Feb release do you REALLY want to watch?

In this world of hectic schedules, and rising ticket prices, audiences have become quite choosy about the kind of movies they want to watch, and spend money on.

This month, there are six interesting movie releases, featuring a great line-up of actors.

Here's a quick look at them. Click through the slide show and vote for the film you'd really like to spend your money on.

We can think of at least two reasons to check out this movie.

Yes, we know Akshay Kumar has been having a bad run at the box office. But we hope Patiala House will change all that because we have not seen a family drama in a long time.

Then, there is Anushka, who has become very popular after the success of Band Bajaa Baraat.

The clincher, however, is watching the Bobby couple -- Dimple and Rishi Kapoor -- coming together again.

If not adults, at least teenagers will identify with Sagar Bellary's film about a fat teen, Shambu, who runs away from home because of a lot of problems.

This is Bellary's second film after Bheja Fry.

Angel does not look as promising as the other February releases. But it may just see the launch of the next big star -- Nilesh Sahay.

Nilesh is Sanjay Dutt's nephew, and the son of yesteryear actress Zaheeda, who was Nargis' niece.

Will the famous genes rub off on Nilesh? Care to find out?

Based on Ruskin Bond's short story, Susanna's Seven Husbands, the movie adaptation is about a woman who goes through seven marriages by killing off each of her seven husbands.

Vishal Bhardwaj has always created magic on screen. And going the the trailer, he won't disappoint this time either.

The premise sounds interesting: Manu (R Madhavan) is an NRI doctor from London, who goes to Kanpur in search of a bride due to family pressure. He meets Tanu (Kangna), who is dead against an arranged marriage.

The trailer looks interesting. Hope the movie is too.

Vote: Which February release do you REALLY want to watch? 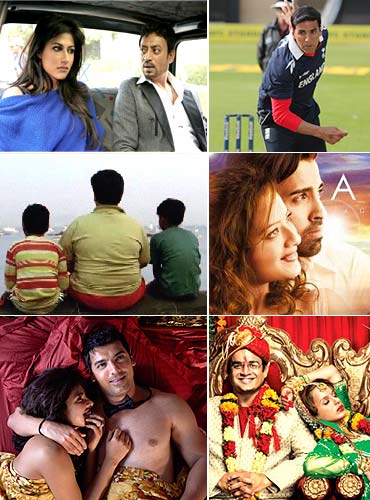 So what are you waiting for? Which of these releases get your vote?