Ranbir Kapoor is all set to play a rockstar in his next film, directed by Imtiaz Ali. The film will see him sport long hair.

But Bollywood has had its fair share of rockstars, all of them meeting with varying shades of success.

We decided to take a look at some of Bollywood's rockers. Click through the slide show and vote for the one you liked best!

Vipul Shah tried to pass off Ajay Devgn and Salman Khan as rockstars in London Dreams, but they clearly weren't up for it. While Devgn wore his jewellery bravely and tried hard, Salman was more natural at being cool.

The film did not do well. But would you give the two actors a vote for trying?

Filmmaker Farhan Akhtar turned actor and singer for his home production Rock On!!.

He didn't have to try too hard, and was brilliant as a aspiring rocker. The way audiences responded to the film speaks volumes for how convincing he was in his role.

With long hair and rugged looks in Rock On!!, many may agree that Arjun Rampal resembled rock legend Jim Morrison. Portraying the role of a failed musician, he surprised everyone with his restrained and believable performance. The role fetched him a National Award.

Wearing long tresses and a supposedly funky look, Himesh tried really hard to look like a rockstar but failed to match the charm of the original Monty.

The extra ZZZZ's in the title only helped to put the audiences to sleep.

At a time when filmmakers were banking on the hackneyed formula of cabarets, Mithun ushered in the disco age with a rockstar image, wearing an open shirt, tight bell-bottom trousers and high-heel boots.

Who can forget the man behind the phenomenon? Music composer Bappi Lahiri, who is also known as the Disco King, made this genre popular in India. Disco Dancer was and still is a trendsetter of its time.

A story of a rockstar in the making, Yaarana traced the transformation of Amitabh's character from a village simpleton to a rockstar.

More than the song, it was Amitabh's costume that became a rage, as people would wrap themselves up in Diwali lights not knowing how to keep them intermittently glowing.

Rishi Kapoor's character in Karz was filled with the kind of passion one will only see in a rockstar.

A movie about reincarnation, Rishi's performance in flashy outfits and his trademark rock numbers were among the high points of the film. A complete paisa vasool.

Tariq played a singer in both the films that he's best known from -- Hum Kisi Se Kum Nahin and Yaadon Ki Baraat. He obviously has the rockstar looks that made both his characters very successful. 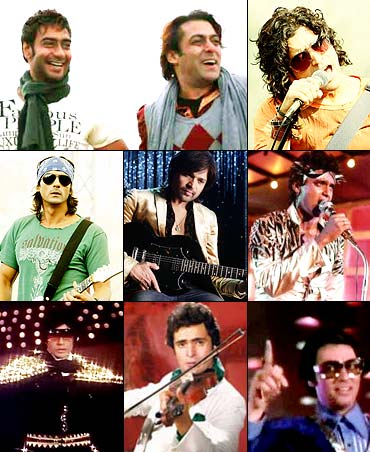