A grand farewell to Dr Vishnuvardhan 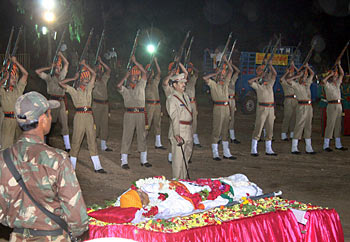 Thousands descended on the streets to give their Sahasasimha, Dr Vishnuvardhan, a grand farewell. Dr Vishnuvardhan, who has acted in over 190 films, was laid to rest at the Abhiman studios in Bengaluru on Wednesday evening. 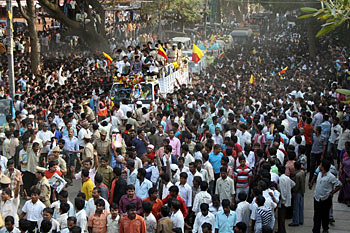 Image: A view of the funeral procession of Dr Vishnuvardhan in Bengaluru
Photographs: KPN Photos

A state funeral amidst thousands of mourning fans was given to the departed soul. The air was filled with chants of 'Long Live Sahasasimha!' as the body was laid to rest.

Apart from family, friends and fans there was also a huge presence of police personnel, who have been battling all day to ensure that everything went on smoothly.

Govt to set up a memorial for him 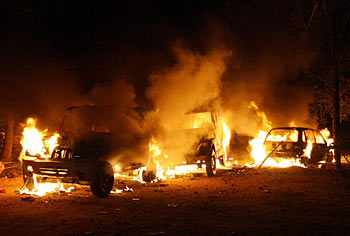 Image: Miscreants set fire to vehicles during the funeral ceremony
Photographs: KPN Photos
Karnataka Chief Miniser B S Yeddyurappa and several of his cabinet ministers too were present at the funeral. The star's good friend and rebel star Ambareesh stayed close to the body all through the proceedings. He was even seen helping control the crowd.

The funeral proceedings commenced with the Hindu rites and wad followed by a gun salute by the state police. The star's brother Ravi finally lighted the funeral pyre at around 8 pm.

Meanwhile, the government has decided to set up a memorial at the Abhiman studios. It has announced a grant of Rs 10 crore to set up the memorial, apart from granting two acres of land towards the same. 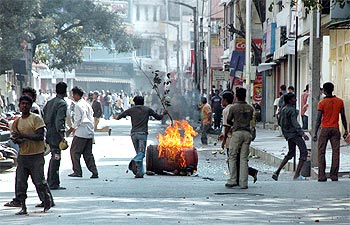 Image: Miscreants on a rampage at Shankarapura in Bengaluru

Prior to the body being brought down to the Abhiman studios to perform the last rites, it was taken on a procession in the city. Shutters of all shops in the city were downed as a mark of respect.

The police had been anticipating trouble all day long and had to resort to lathi charge on several occasions. However, the scene got a bit ugly when fans started pelting stones at the South End circle area in Bengaluru minutes before the procession passed by. 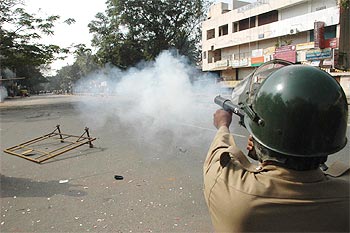 Buses and autos were the worst hit as fans threw stones. The police had to resort to a lathi charge in order to quell the mob. The mob fury was quite evident when some persons even pelted stones at the ambulance that was carrying the body of the star.

Even the car of the Commissioner of Police Shankar Bidri was not spared and he too had to bear the ire of the mob. Even minutes before the pyre was lit, fans set ablaze a police van outside the venue at which the funeral was held. The fans were upset that some of them not allowed into the venue.

At Abhiman studios, the scene were simply heart rendering. The star's wife, Bharathi, put up a brave face while she watched the last rites being performed.

She had to regularly appeal to the fans to maintain calm. She was along with her two daughters, Keerthi and Chandana.

'Miscreants are not his true fans' 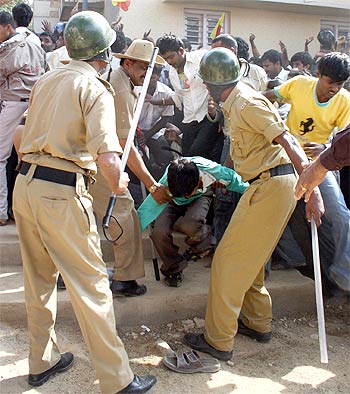 Image: Policemen controlling fans mourning the demise of the actor

Some of the members of the Vishnuvardhan fans association, who helped in carrying out the last rites, said that the violence in some parts of the city was not something a true fan could have done.

"There are some miscreants who are doing all this. Our hero was a peace loving man and even in his death, we will respect what he stood for," a member said.