'Not upset that stars didn't come for Hangal's funeral' 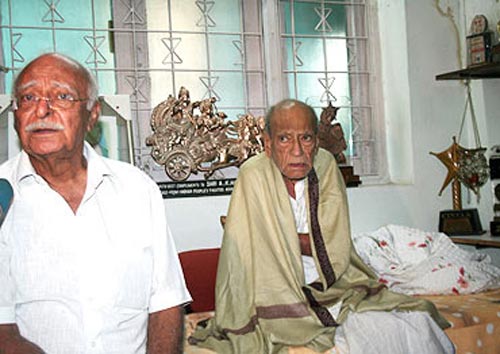 Veteran actor A K Hangal passed away on August 26 at the Asha Parekh Hospital in Mumbai, shortly after celebrating his 98th birthday on August 15.

Hangal's son, Vijay Hangal, 76, speaks to Patcy N about his father and his condition before his death.

On August 13, my father had a bad fall. He was in a lot of pain and could not move at all. The doctor said that his hip bone had fractured and suggested surgery to relieve him of pain.

I asked my father whether he want to go ahead with the surgery and he said yes. Anyone else in his condition would be scared, but he was a strong man.

On August 14, when we were taking him to the hospital, he told me, "Vijay, you first tell me whether I will live or die."

I told him that life and death is not in our hands. I wanted to tell him a lot of things but was not able to say them.

So I wrote a poem for my father and put in all the thoughts I wanted to tell him.

We took him to the hospital on August 16, the day after we celebrated his birthday.

The tests found that he was not fit for surgery. He was in pain and his condition was getting worse. He was shifted to the ICU. He was not able to talk and would just make sounds; we had to guess what he was trying to say.

On August 25, he left us. The last day was very difficult for him. I am not upset that people from Bollywood did not come for the funeral -- may be they have their own problems and there is no point in making stories of all these things. If I do that, I will start feeling small from inside.

'My father got lots of love from his fans' 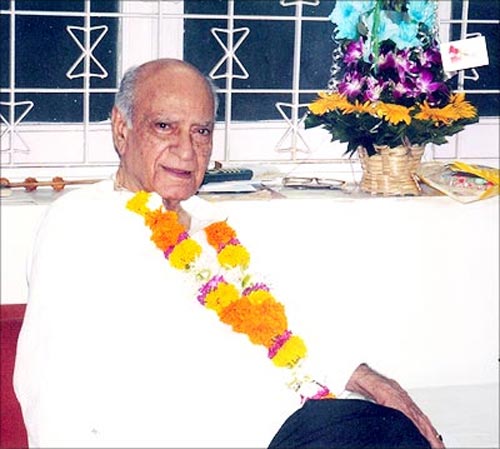 My father was a born actor. Tailoring was his hobby, his passion. He loved clothes therefore he learnt tailoring and became a tailor. He did not want to become a government servant under the British Raj like his father and grandfather. He was a freedom fighter.

As a kid, I saw his stage plays but never went to his film sets unless I had to do the publicity stills (Vijay Hangal was a still photographer who has worked on many films.)

My school mates did not even know that I was the actor's son. There was not that much exposure to films in those days.

My father would be very busy. He did small roles in many films, plus he was doing theatre so he worked in shifts. There is no point in saying my father was not there for me when I was growing up because I understood it was his work. He had to be away.

My father got lots of love from his fans. Financially, he was never very sound because in those days, money for character actors was very little. In the last 10 years he started getting lots of money, but he worked less because of his bad health and, of course, because of the two-year Shiv Sena ban.

(A K Hangal on the Shiv Sena ban on him: My film career was doing well when Shiv Sena supremo Bal Thackeray put a ban on me in 1993 because I went to Pakistan. I wanted to see my old house and needed material for my autobiography. When I was there, they invited me for a Pakistani Day function and I attended it. The next day, Bal Thackeray said, 'A K Hangal deshdrohi hai' in his newspaper, Samna.

My films were removed from theatres in and around Maharashtra. My film posters were torn and my effigies were burnt. I received threatening calls.

I replied that I don't need a character certificate from anyone. I am a freedom fighter. Meetings were called in my support. But I was boycotted for two years. After that, things were fine again.)

Lots of people helped us after the media showed my father's plight on television. Many people from the film industry gave us money. We got money from artists with whom my father had never worked too.

We did not squander the money, we used it all on his sickness and various hospitalisations, but now those funds are exhausted too.

I will go to Delhi in a couple of days to meet some relatives, who wanted to come and meet my father. I will also feel good, and at least get some change.

I am 76 now and cannot pursue photography because my profession is for young people. I sold my studio and used some of that money for my father's health and daily expenses. Some I have saved and I will live on the interest. I should not be a pauper when I die.